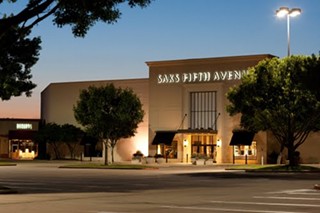 The Mayan doomsday came and went like a lamb, but some weren't spared. On New Year's Eve, Saks Fifth Avenue's jewel box-like central Texas location at the Arboretum closed its doors. Opened in 1997 as a small outpost to serve an increasingly affluent market in North and West Austin,

and at 52,000 square feet, the store was miniature even by 1990's standards. Saks had brazenly elbowed into a Texas market dominated by Dallas-based Neiman Marcus a few years before, by opening spectacular space in Houston's Galleria as the anchor opposite to Neiman's, who had reigned over neighbors like Barney's and Coach for decades, unchallenged. There were no plans for a Neiman Marcus here in Austin at that time, mostly because it had a long-time policy of not sharing territories with its discount sister, Last Call, located on South Lamar. That changed when, according to store sources, Saks had first refusal on the space now occupied by Neiman Marcus at The Domain, but passed on it. Neimans 1, Saks 0. Saks Fifth Avenue stores in Highland Park, Illinois and a Pittsburgh store also closed in 2012.

9722 Great Hills Trail is still anchored by a busy Sephora and other neighbors such as Talbot's, Ann Taylor, and Williams-Sonoma. And take heart. If Neiman's Last Call isn't working for you, you can still shop Off Fifth's San Marcos location for your Saks fix.