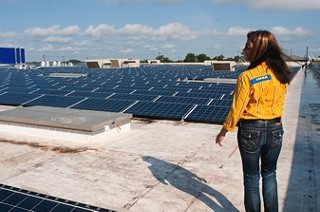 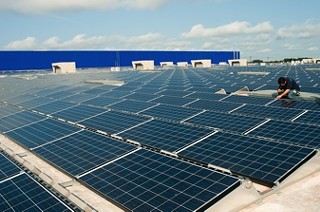 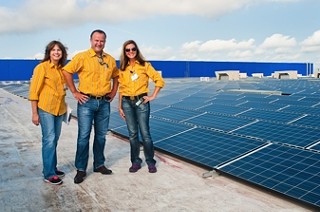 This week, mega furniture mart and outfitter for the streamlined and tasteful IKEA invited a few of us to get an up-close and personal look at their latest project: A massive installation of roof-top solar panels. How massive? Let's break it down.

IKEA's Solar Commitment By the Numbers*

273,700 square-footage of the solar panel array on the roof of the Round Rock store.

(When combined with the solar projects already atop their stores in Houston and Dallas-Frisco, this makes IKEA the largest private solar owner in the state of Texas, and this the largest of all IKEA solar installations atop their U.S. stores.)

250,000 solar panels have been installed on IKEA stores, worldwide
306,000 square footage of freshly expanded IKEA Round Rock store
6,664 panels on the roof of the Round Rock store
2006 the year IKEA opened in Round Rock (November)
1943 the year IKEA was founded in Sweden
1,822 tons of carbon dioxide (CO2) reduced annually (the equivalent of 324 cars or powering 206 homes for one year)
1,633 system in kilowatts
590 millions of Euros IKEA is committing to this three-year investment in renewable energy
330+ IKEA stores in the world
89 percent goal of U.S. locations to have solar presence
75 percent of U.S. locations to have solar presence, achieved this local project
40 countries with IKEA stores
38 IKEA stores in the U.S.
33 completed solar projects for IKEA in the U.S. (We're 33rd)
8 acres this solar panel array covers
6 more locations underway in the U.S.

*according to their local office, in a September 24, 2012 release