Ruth Waddy on Being Ruth Waddy

The artist talks about her funky bike tube clothing line 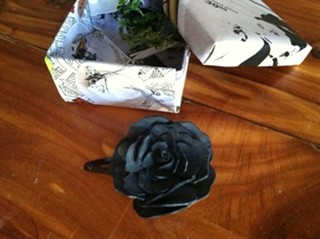 I have a special place in my heart for the type of original crafts you find at First Thursday, especially when it’s eco-friendly art.

I recently visited my friend Jewelry by Ally owner Allison Schwabe while she was vending on Soco on a Sunday. As I walked from booth to booth she asked if I saw anything that I couldn’t live without. I shrugged, uninterested, and said no. Soon after I stumbled into Ruth Waddy’s booth and instantly found a sturdy, black rose hair clip made of bicycle tube that I had to have in my life. Maybe it’s her playful, childlike voice or the fact that we have the classic name ‘Ruth’ in common, but beyond her creations, I was immediately infatuated with Ruth Waddy’s style.

From her play on words and energetic appeal to her thoughtful, recycled packaging, buying a Ruth Waddy piece is an experience in its own. She designs wedding gowns and costumes but has always been interested in being resourceful and avoiding wastefulness. Her bike tube clothing and accessories have taken on a life of their own. Her two main lines are split into Ruth and Ruthless; one line is sweet things like wedding gowns, the other is grunge-like gowns with intricate patterns made of cut bike tubes.

I sat down to highlight quotes from Waddy’s emails and found this approach to be a miserable failure, because the entire paper was yellow. There is no eloquent way to cut and paste Waddy’s story- she tells it better than I ever could. So in her words, here’s Ruth Waddy on her clothing lines, her inspirations and what it’s like being Ruth Waddy.

Waddy: When I was young I remember telling my dad that I either wanted to be a garbage collector or a fashion designer. I still want to be both.

I grew up an Air Force kid, the youngest of four and the only girl. My brothers were expert dumpster divers and we'd go on adventures that often yielded fantastic treasures. We found pompoms and electrical wire, a little gold necklace with a tiger's eye …

My parents fostered our creativity. My mom taught me to sew and made most of our clothes growing up. My dad is a talented photographer and adept artist who introduced us to a variety of mediums as a child.

My family is Catholic, though it never took with me. They are carnivorous, and I am vegetarian. For years I sifted through the trash at family picnics, separating cans for recycling.

These days they recycle more and eat less meat, and maybe I'm a little more empathetic to their religious convictions. Regardless, they are unwavering supporters.

My dad went to Trinity after he retired from the Air Force. My brother also attended the university. I was a diligent student though not much of a life planner. I was sort of nudged in the direction of Trinity because I hadn't really made any other arrangements. It turned out to be a phenomenal experience, and I graduated with a degree in costume design in ‘94.

There was a long period of post-academic, artistic soul searching. I made clothing and costumes throughout, alternately doing contract work and commissions for friends, artists and theater companies.

I spent a decade in Portland, Oregon. There I got involved with Junk to Funk, an organization that promotes recycling and environmental education through after school programs, camps and ‘trashion’ shows. I had made a few costumes and dresses from bike tubes, but the breakup of a long relationship heralded a move back to Texas and sparked the decision to build a fashion line out of tubes.

I've been working on this endeavor since November of 2011. Vending on Soco has been an invaluable experience. It allows me to get honest feedback from the public. For the most part, people assume that the products are made of leather. It's fun to watch them discover that the material is actually bike tubes!

This summer I started setting up at Snack Bar, and it is by far my favorite venue. It's a comfortable environment that respects and nurtures artistic entrepreneurs.

The material itself is inherently tough looking. I noticed that some products I make are ultra feminine and sweet while others have a bit of an edge. As a result, two lines have emerged- Ruth and Ruthless. I imagine Ruth and Ruthless as conjoined twins who were abandoned in a dumpster and raised by rats. The two heads share a single body and take turns making clothes.

I made it a goal when I started the business to participate in Austin Fashion Week. By the deadline for application, I felt woefully ill-prepared to have a 20 look runway show and instead, signed up to be randomly matched with other artists in a mash up team. My team was awesome. I wanted a bigger challenge, so I bought eight tickets to the kickoff event. I decided to make eight bike tube gowns and invite friends to wear them to the party. It seemed like an interesting way to show my work to the fashion community. The response was phenomenal! My models were fantastic, and they attracted a lot of attention.

I met Shelley Meyer from Austin Rocks at Snack Bar where I was vending for First Thursday. She invited me to have my first trunk show in the store, and I readily agreed. The ‘Ruthless’ clothing seemed the perfect thing. I couldn't have happened upon a more talented, dedicated and enthusiastic crew. They've really committed to promoting local talent.

Kandy Glass also offered to host a party for our mash up team at her studio downtown. This showcased the wedding dress from the mash up photo as well as models in cocktail dresses from the ‘Ruth’ line. Kandy has been an incredible resource for me, and she is an absolute pro! The party went beautifully and my models looked gorgeous.

I'll do Fashion Week next year, and I plan on being ready for the runway.

Since Fashion Week friends have been encouraging me to approach Mellow Johnny's about carrying my stuff. Bike shops seem like a no brainer for my product - I often feel gently guided to the most obvious areas I've overlooked!

I'd love to make more wedding dresses and am developing designs that incorporate bike tube accents. Since returning to Texas, I've not taken on any costuming or wedding dress commitments, though I'm open to the possibility.

I've been invited to show a few looks at the Art Institutes’ Student Fashion Show Sept. 12. I'm also interested in participating in the Fashionably Pink Fashion Show in October.