Mondo Gets Cut Up And Nagelized For New Gallery Show 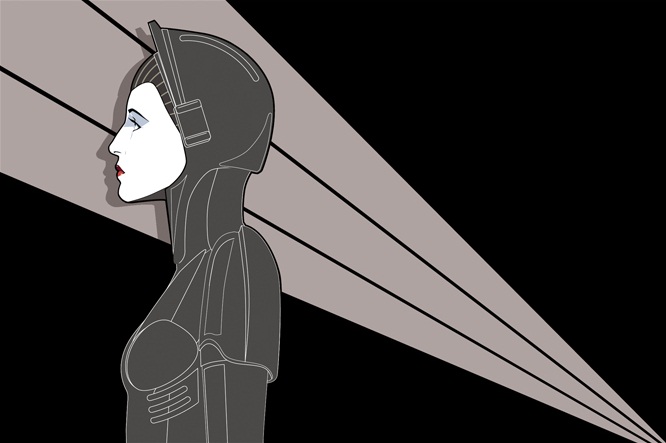 Unleash the Nagelizer! Craig Drake pays tribute to Patrick Nagel and 'Metropolis' in 'Maria' for his Mondo Gallery show with Robert Brandenburg (Image courtesy of Craig Drake via Mondo)

Break out the air brushes and hair gel! The Mondo Gallery is bringing new wave/nerd wave fusion genius Craig Drake and cut-up maestro Robert Brandenburg together for their next deconstructionist poster show.

Drake is famous for bringing the distinctive style of Patrick Nagel into the sci-fi realm. Patrick who, you ask? Nagel was the 80s heir to the cheesecake throne. Mixing angles and airbrushing, his stylings were … OK, remember the cover of Rio by Duran Duran? Yeah, that's the guy. Drake's famous Nagelized Princess Leia lithograph for his bosses at Lucasfilm turned heads. Last year he rocked the Star Trek: Voyager vibe with his 7 of 9 tryptic for Mondo's poster division, and he made his gallery debut for them over SXSW with his homage to Sean Young's greatest performance, Rachel in Blade Runner. Now he'll be bringing the same sleek aesthetic to the sirens of Metropolis, Black Swan, and Kill Bill.

His work will be displayed next to another master of the mashup. Like Drake is inspired by Nagel, Robert Brandenburg's pop art meldings have more than a sliver of iconic punk welder/melder Winston Smith. If Drake is immediately recognizable, then Brandenburg is the devil in the details, like the roses hidden in his Deliverance deconstruction.