How's Your Self of Steam?

See the future's swashbuckling past in the present this weekend! 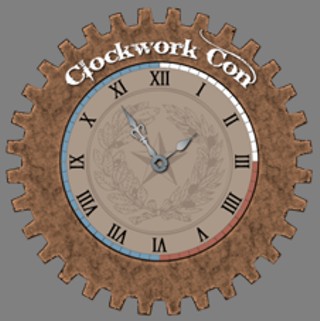 Get it in gear, you insidious rogues!

"You feel steamy, punk?"
is how we titled last week's blogpost
about the steampunk improv show
currently at Salvage Vanguard Theater.

Oh! The effort required
to not use that tasty morsel
of popcultural reference & relevance
just one more time, my comrades!

Because – behold! – this weekend
the ATX boasts a roiling epicenter of
anachronistic wonder and enchantment
that's calling itself Clockwork Con.

It's a stunning, stately, steampunk gatherum
there at the hotel that, in some alternative timestream,
is still known to citizens as The Red Lion.

Likeminded cultural tempunauts will be
roaming the halls and filling the rooms
and engaging in general style-bending shenanigans
between salvos of live professional entertainment
– bands, burlesques, and brass-tinted prestidigitation –
and later, perhaps, succumbing to fits of contemplation
as perforce descends upon even the most cavalier of natural philosophers.

How could you resist, friend?

If the $60 weekend attendance fee deters you
(although, hey, it's only $25-35 for a day pass),
then we suggest – nay, we recommend – you consider
assuaging your diesely cravings with that SVT show we mentioned earlier.

(Also, the Salvage Vanguard Lobby Gallery currently boasts,
for your added pleasure, a show of screenprints & originals
from Austin's own Nakatomi Inc powerhouse of visual goodness.)

Anyway, regardless of where the horological fates move you,
one can't go to the Wells too often, nor take a Verne for the worse, we daresay ...