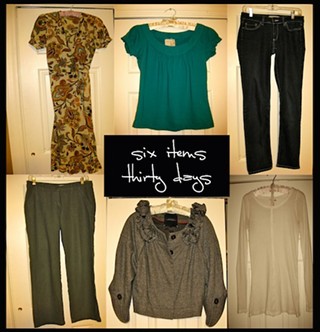 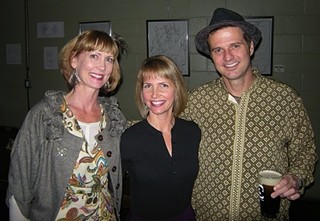 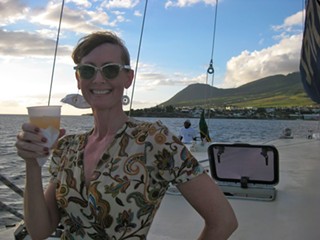 Could you get by for an entire month wearing only six pieces of clothing from your closet? Or would you have incurable wardrobe withdrawal at this fashion master cleanse? Would it be a lesson in simplicity and overconsumption, or just in deprivation?

These were questions I set about answering when I took on the Six Items or Less challenge on January 10. I read about the experiment in the New York Times last summer – the experiment started as a dare between Heidi Hackemer and Tamsin Davies, two advertising executives who were fed up with the ridiculous amount of clothing they had, as well as the time they spent deciding what to wear and putting their outfits together. Hackemer and Davies became intrigued by the idea of a sort of uniform as a means of enhancing creativity, as well as the desire to tame their own urges to buy. When did shopping become a hobby, they wondered, and agreed to wear only six items of clothing for the next month. The idea caught on with colleagues, and soon it was being reported in the Chicago Tribune and on Good Morning America. A second round happened in Fall 2010 with about 100 participants, and suddenly it was a “thing.” I thought the idea rocked, and when a new Six Items project was announced for January 2011, I signed up.

The experiment itself is simple: Each participant gets to choose six (and only six) items of clothing and pledge to wear only these items for the month. There are also exceptions that don’t count towards the six (thank god!): undergarments, swimwear, work-out clothes, work uniforms, outer wear (rain slicker, winter jacket), shoes and accessories. So I tackled my closet and started narrowing it down. That process was an eye-opener in itself. Looking at my clothing critically, I began to see how many things I rarely wear. I realized that I only regularly wear about 25% of the clothes I own. So what am I doing with all the rest of this stuff? Eventually I narrowed my choices down to 10 items; getting from there to six was tough. In the end, I settled for pieces that I thought had the most versatility, and that I could be comfortable in whether it was warm or freezing – this is winter in Central Texas, after all. My six included one pair of jeans, a linen pant, a short-sleeved and long-sleeved top, a jacket, and a dress that can also be worn over pants as a long top.

I started off with excitement, doing daily check-ins at the Six Items website to report what I was wearing that day, and how I was feeling about it (Great, Zen, Blah, Hating It, etc). As the days and then weeks wore on, overall I didn’t find the experiment too difficult. It helps that I work at home; it would definitely be more of a challenge if I worked in an office every day or had lots of meetings. Many of the other Sixers found incredible relief at the amount of mental energy and time that was freed up by not having to decide what to wear every day. Another interesting aspect is that notion of a uniform adding to creativity. I’ve never been a uniform or conformity kind of gal, and so this seemed like a paradox to me. Until I found myself limited by my six items, and slowly, after a couple of weeks, growing pretty tired of those same damn clothes. Suddenly, accessories such as jewelry, belts, scarves, shoes and hair ornaments took center stage, and the creativity of changing up and dressing up the same clothing became its own challenge.

In spite of the fact that I grew tired of the clothes, other people around me either didn’t notice I was wearing the same things or commented on how good the outfits looked. I was told at a friend’s birthday party that I looked like I stepped out of an Anthropologie store; my boyfriend mentioned, at the end of the experiment, that he didn’t think I looked the same every day at all. On a press trip to the Caribbean that came in the middle of the project, a writing colleague said that I carried it off “with such style!" Now that the last day has come and gone, I have to report that I had fun with it and didn’t find it overly challenging. I also definitely learned a few things:

Quality is better than quantity. Sounds obvious, but when you’re wearing clothing extensively, the importance of quality becomes huge. Couple that with the fact that much of what’s in our closets we don’t even wear that much, and the idea that it’s far better to have fewer pieces of high quality than a whole lot of cheap crap becomes all too clear.

Recycling is Queen. Even when it comes to clothes. I buy a lot of my things at vintage and resale shops, therefore reducing the manufacture of mass-produced clothing. And when I get new things, I will always cull through and donate items that I no longer wear.

Too much limitation can backfire. While simplicity and resisting the overly consumerist lifestyle are wonderful things, restrict yourself too severely and it can have the opposite effect in the long term. It’s sort of like the super rigid, strenuous diet – you might lose a bunch of weight and do really great for weeks, but when you fall off the wagon you usually binge, and in a big way. Six items might be too limiting, but I will definitely have a wardrobe of fewer than 50 items from now on. Shop with a critical eye. In the future, when I do actually need an item of clothing or just want something new, I will scrutinize my purchases much more carefully. Do I really love it? If I were choosing only six items to wear again – hell, even 20 – would this make the cut? If it’s not likely it would at least be in the final running, I will pass it on by, thank you very much.

Despite my relief that the challenge was over and I could finally wear something different, an interesting thing happened on February 10th. I walked into my closet, looked around, and became sort of overwhelmed. My first impulse was to grab the jeans and one of the tops from my Six Items wardrobe like comfortable, familiar friends. I suddenly realized that my clothes don’t define me, and I am not what I wear. Taking on a challenge to fashion simplicity allowed me to take back control over my own style.