MTV Meat: It's What's for Dinner 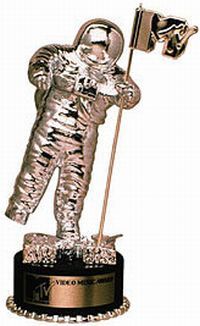 It was a meat dress fit for a wake. That's right, we said "meat." Being somewhat nearsighted, we have to admit that when Lady Gaga took the stage on Sunday night to accept her MTV Moon Man for Best Music Video, our initial reaction to her frock was, "Oh, faded, crushed, red velvet." After the seriously weighty Alexander McQueens

she had worn earlier, we guessed she was about a tasteful counterpoint. Weighty? Yes. Tasteful? It depends on who you talk to. Then we noticed the flank steak on her head and heard her ask Cher to hold her meat bag. Unquestionably, MTV intended for Cher to appear to be passing some sort of torch; good thing she didn't get too close. Were Gaga's foundation garments made of white butcher paper? How did the sanitation crew protect her seat in the Nokia Theatre? Did MTV, group of notorious tightwads that it is, pay for a new one? What if it was veal? How do we feel about that? In any case, it takes real stones to deliberately leave a blood stain in your seat.

Maybe Gaga took a liking to charcuterie when she wore this meat bikini for Japanese Vogue Homme: 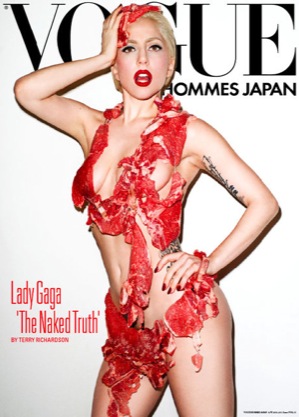 It's not surprising that, as the postmortem drones on, it proves much more interesting than the evening itself. Why were we not more concerned with why Tay-Tay and KanYay didn't duet in an on-air kissy fest (since we know the network, eager to slap a sponsor on it, implored them to. At least we were spared the Trojan Reconciliation Kiss) than we are with will.i.am's makeup? Will.i.am apparently decided that the difference between his own pallor and that of his black leather wet suit was a distraction, so he matched his makeup in a nice, dark black. Now we have to endure the irate dum-dum buzz. To call that blackface is disingenuously ignorant. Moreover, if a black man chooses to wear black, smear himself with black greasepaint, or quite frankly, wear a black bandanna across his face, it's really none of my business until he smears on white. Even then, I doubt I would care. We are convinced, however, that the choice of a white carpet was definitely racist.