Get the Flare Out: Carving Up Old Clothes Again

Dig out the dated flares and make skinny pants. 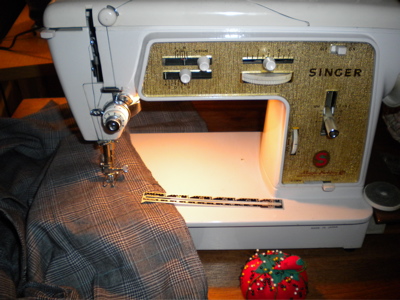 If you're a pack rat, I mean archivist, then you already know. When you need that pair of black pants, The Uniform, that you'll snatch up on nights that premium denim is a fail, and that your black jacket will tolerate, you have two choices. You can haul yourself around in vain to every clothing store in town,

after already enduring the sweat-lodges of Marshall's and T.J. Maxx, dragging the jacket around to match for something in the same black, or you can throw some thread on the machine, grab your sewing scissors, and shop the back (or floor) of your closet.

Everyone has their own neurosis, I mean method, to knowing what to keep. My own qualifying hierarchy goes like this: a) If it's a great fit, can it be taken apart to make a pattern?; b) can I envision any alteration that would make it work right now?; c) if permanently unwearable, is it important enough historically, or sentimentally, to archive?; and finally, d) is the fabric wonderful enough to make into something else? Scenario No. 1: A green flannel nightshirt with a fishing/camping print and shirttail hem, obtained from NYC's now-defunct Little Ricky's, not to be confused with Ricky's. The shirt qualified for (c) and (d) and sat in a pile for 15 years. The other day I looked at it, and it wanted to be a drawstring pajama bag for someone I like. Cutting it in half horizontally, turning it inside out and sealing it up around the already curved hem, then flapping over the top edge to hold ribbon made it work. We bogarted the pocket off the top half and put that on, then strung it with green and black ribbons for the drawstring. Massive dose of hoarders' validation. I may never throw anything away again. 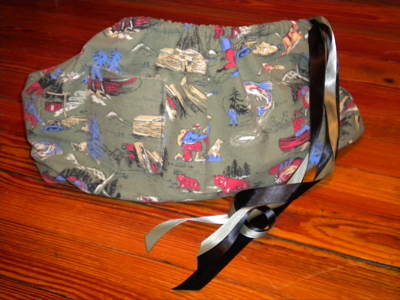 Scenario No. 2: I needed a pair of said pants recently, and didn't have it up for the retail grind. Like most people, I still have several pairs of former favorites hanging in the closet. Since the only thing wrong with the best-fitting of the lot was a bell-bottom issue, and since, as bells, they were already snug through the seat and thighs, I decided to carve them down to straight legs. I did it while packing, so it couldn't have taken more than an hour. They only cost about $20 to start with, so in their second incarnation they are basically free pants. Let's do it:

2) Put on the pants inside out and get them closed as well as possible.

3) Pinch down the outside seams, until you have about half an inch (you're going to angle in from the existing seam, so ignore OCD paranoia about gaps). Start there, and using straight pins, pin down the outside seam of both legs. As you get to the bottom you may need help to keep them in place. Note: the back piece on American pants legs is somewhat wider than the front piece, allowing for the roundness of the leg in the back. To preserve this ratio, make sure that you are always keeping the fabric outside the seam allowance flat while pinning/ stitching.

4) Keeping them inside out, lay them out flat. Examine your new seam allowance, roughly comparing the legs to the ideal measurements you took earlier. You'll see the potential for straight lines, so using a straight-edge and drawing freehand where necessary, create your new seam line. 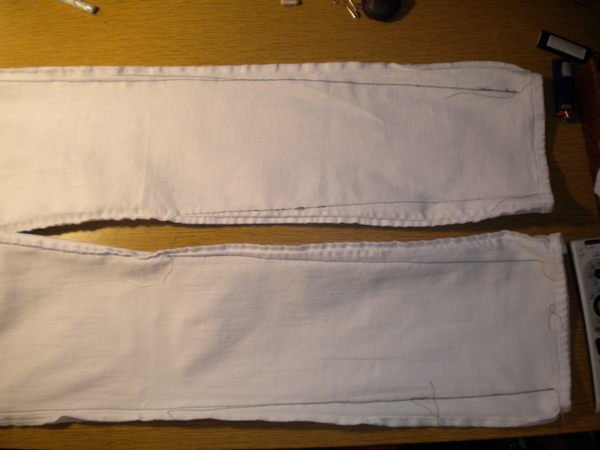 5) Adjust your pressure foot so that it doesn't stretch the fabric out as you sew, and set the stitch length for basting in case you have to start over, as I I did on one leg. On the other I could follow the baste with another, more secure seam. Start in the existing seam, about one inch above your initial half-inch pinch-off, and angle gently in to your own line. Continue down to the bottom, making sure to keep fabric from bunching, unless, of course, you're into tucks down the sides (not a bad idea).

6) Try them on right side out before cutting off the excess fabric. If they look pretty good, they'll look even better when properly trimmed, ideally with pinking shears. The length you can work out last. Bell bottoms are usually longer than straight legs, so you'll have something left to work with. If the pants are black you can run some black satin ribbon down the sides, and be Marlene Dietrich. Get behind a few see-throughs and favor the glitterati with your rendition of "Falling in Love Again (I Can't Help It)". 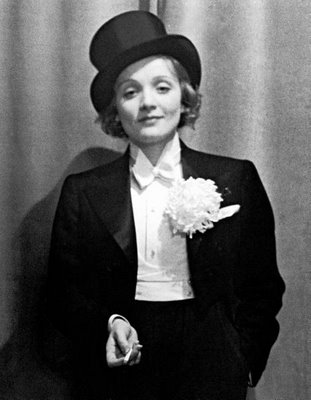 Now you've still got some bank in your pocketbook to by more BOOTS! Here is how I spent mine: 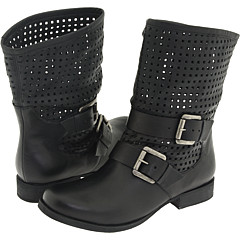