Throwing Darts at the Cameo: Why the Beauty Bar Needs a Makeover

The Beauty Bar needs a makeover 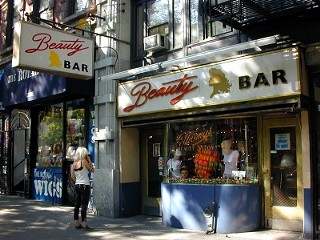 Once upon a time in 1995 there was a beauty shop on East 14th Street in New York that became one of the first theme bars, the original Beauty Bar. Taking over the Thomas Beauty Salon just as it was closing allowed the pickers to use a lot of the original nail polishes and bottles and potions in the decor, along with the old hairdryers, made available for lounging. It was before cigar/champagne bars spread out of Soho like the plague, and after Jekyll & Hyde, which was a tourist place with moving barstools anyway, so it didn't count. "Living-room" bars had already been around since the mid-Eighties and everyone was tired of going to Nell's, also on 14th Street. So the Beauty Bar joined dubious contemporaries like No-Tell Motel, Babyland (domestic space with oversized furniture), and Barmacy (apothecary bartenders) in the burgeoning theme-scene, and was really the only interesting place to go early. The best part was that after hoisting a new, pink martini called a Cosmopolitan, one could actually wander over to see Mrs. Thomas, who would hold court among the ancestor-hipsters doing soaks and polishes until eight o'clock on week nights.

Needless to say, though Beauty Bar Austin is a great music venue, except for a few cameo silhouettes on the wall (and some fresh-candy bartenders whose hair I'd like to process), the beauty theme is pretty much lost here. This was a disappointment at first, since Austin is home to great pickers and space planners, and the brand seems made more for this goofy town than any other. But if black sinks and old aerosol cans are not what we need on Seventh Street, that's just the neighborhood.

In Los Angeles, Beauty Bar regulars are fastening their smocks every Tuesday night for free airbrush jobs and eyelash applications while they nurse cold Hpnotiq. For such a big franchise (six now, including L.A. and Austin), our location falters with an underwhelming identity crisis because it's really not a theme bar, and the space itself suggests more lumber mill than beauty parlor. Those are just two of the things, though, that make it a great place to see stage shows. Those unfamiliar with the Beauty Bar brand who come to see a Rusted Shut show probably wonder what's up with the name.

Maybe henna painting would be crunchy enough for Seventh Street happy hour grog specials, but much simpler would be to stencil a mustache on a renamed cameo and move the franchise to South Congress or Second Street. Until then, my friends just call it Booty Bar.