The Jewels of Castle Hill 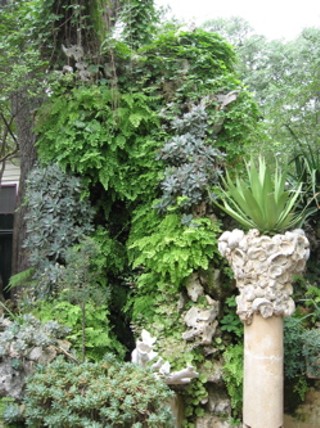 Humid and overcast, it was the perfect day for throngs of straw hat and sandal-clad pedestrians to invade the narrow streets west of Lamar for The Heritage Society of Austin's Jewels of Castle Hill home tour. Being able to walk a tour is always a plus, in part to see the other guests. But in a neighborhood like Castle Hill, where upended sidewalk pavers and every climbing rose and 200-plus year old wisteria become as much a focus as the historic palaces on the map, it's a given.

No matter how rooted you are, or how much you love your present neighborhood, if you've never explored Castle Hill, forget it. There is no neighborhood in town quite like it, for good reason. Its genesis is in the Raymond Tract, developed by James Harvey Raymond, one-time Treasurer of both the Republic and State of of Texas. Today it is known as the West Line Historic District, named for the streetcar that once followed Sixth Street. More commonly, the area is known as Old West Austin. The homes found in these hills that overlook the Capitol present a wide variety of architectural styles dating from the late 1800's to the present, such as Italianate, Eastlake, Colonial Revival, Craftsman, Tudor Revival, Ranch, and Minimal Tradition.

It should be noted that a tour of homes like these is as much about the present occupants as it is about architectural or cultural history. The sort of people who take on historic abodes that require almost the same resources and physical energy as, say, parenting, are usually strong personalities with the means to not only focus on restoration, but indulge their own imaginations as well. This said, one must expect varying degrees of success. The Martin-Glass House (c. 1911), a cottage on West 12th, is great example. Owned by a pair of artists with strong fabrication skills, much of what astounds about the property has been made by the owners. The dining-room table is fashioned from marble dust resin and inlaid with mother of pearl. Obviously, it is exactly the size needed for the space, another advantage of making your own furniture. The Bones-Stokes House (c. 1909) on West Ninth, a Craftsman-influenced Transitional example originally built by a Mr. Omar Bones, remained in the same family until 1996, and was later owned by Sandra Bullock. The house now has an almost completely modern interior, made more stark by dark neutral colors, for better or worse. It was interesting to see the West Austin Fire Company (c. 1906), not least for the pilasters, arches, and cornices that reflect the Romanesque Revival style. The real jewel of this tour, though, had to be the Mary Perry Taylor House (c. 1904) on Baylor Street. Seated on a ridge overlooking downtown, the house remains a stunning example of the Queen Anne style from the street despite numerous and extensive modern additions. Designed by Fern Santini of local design firm Abode and architect Mell Lawrence for Nicole and Tyson Tuttle, the additions are not evident from the formal areas in the front of the house, and when one does encounter them, they seem to blend with the outdoors, visible through generous expanses of glass, rather than conflicting with the rest of the house. It is fortunate that we saved this house for last, because the entire property was so beautifully done, and so inviting, that my husband had to drag me from the closet in which I had chosen to "stow away." This writing is the first time I have described the place without actually sobbing, a fact that has nothing to do with my allergies.

Known for organizing memorable tours such as last year's Atomic Austin Mid-Century Modern "rally" (reportedly, it was not a walking tour), The Heritage Society otherwise works as a watchdog for preservation in central Texas, and has realized victory for 300 historic properties in its 50-year effort.

It must be noted that this was the best-organized and most interesting home and/or garden tour that this reporter has hiked. There was, however, a no-photos rule on this tour, reportedly in deference to the owners' security concerns. Without pictures it is impossible to impart the experience here, and that is just one of many reasons to mark your calendar for next year. You really had to be there.