Explore Downtown without a car and without getting lost

This year, the Austin Chronicle will host 2016 Association of Alternative Newsmedia at the Westin Austin Downtown (310 E. Fifth) from July 7-9. If you're headed this way, here are your options for getting to the hotel and around town. The MetroRapid bus (aka the bendy bus) (Photo by John Anderson)

Getting to the Westin Austin Downtown

Capital Metro’s Airport Flyer runs to and from the Austin-Bergstrom International Airport (ABIA) every 30 minutes. Direct access to the downtown area is $1.75. The Westin is one block north from the East Fourth and Trinity streets stop.

We've listed the numbers, but hailing a cab from the airport's transportation line on the lower level is probably a better bet.


For charters and limousine services, visit the airport's website.

The Westin Austin Downtown doesn't have its own shuttle. The alternative is SuperShuttle, which can run you $12 for a shared-ride to $70 for a luxury meet-and-greet SUV. You can book online or call 800/258-3826.

Uber and Lyft dramatically left the city after residents voted against Proposition 1 last month. Advocates for the ride-hailing apps spent an estimated $10 million to convince voters that its ordinance, which would have rolled back city regulations of TNC operations, was a good idea. But they failed.

Although they have signaled they will return, Uber and Lyft have ceased operations in Austin for the time being. In their absence, a whole host of ride-hailing options have popped up to take their place.

RideAustin is a recently launched community-based, nonprofit TNC serving downtown Austin and the airport. Riders pay $1.50 per mile and $0.25 per minute, plus fees (there's a $5 ride minimum). If you're feeling generous, you can round your total up to the following dollar amount and donate the difference to charity. The app is only available on iPhone, though RideAustin expects to roll out an Android version in July.

Wingz specializes in airport rides in nine different cities, including Austin. Rates vary, but you can get a quote and book your ride here or through its app, available on Android and iOS platforms. First-time riders can ride for $1 if they book by July 1.

zTrip's ExecuCar offers scheduled sedan and SUV service to and from the airport. You can book your ride ahead of time online or through its app. You must provide your airline and flight number information. Rates vary. 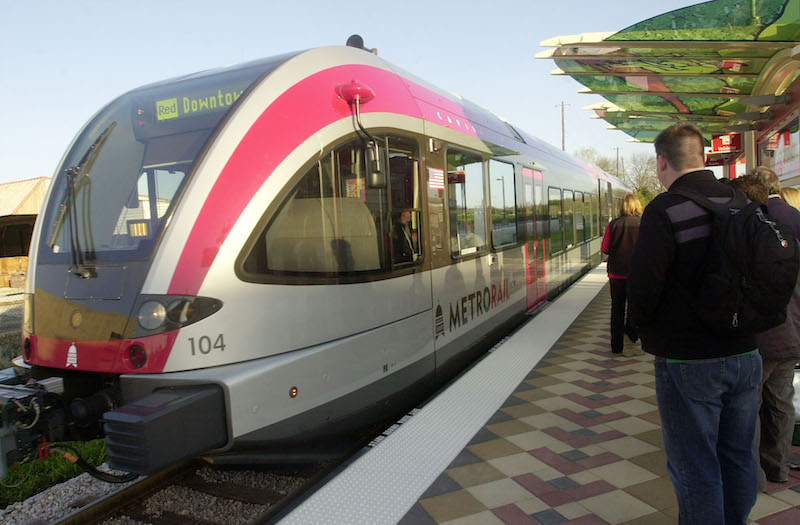 Getting Around Downtown Austin

Capital Metro – Austin's multimodal public transit system – is the easiest way to explore the city on the cheap. Single rides start at $1.25 (transfers not included), while day passes run as little as $2.50. You can buy tickets online, at most grocery stores, or through the CapMetro app, which also gives you up-to-date travel information.

MetroBus runs throughout Downtown and the greater Austin area. Single rides cost $1.25. The closest stop to the Westin is at East Fifth and San Jacinto, where you can catch Route 4 to Montopolis (right across Lady Bird Lake) or Route 22, which circles through Downtown and Central Austin. Other bus routes are within walking distance of the hotel.

There's also MetroRapid, Capital Metro's express bus service. There are only two rapid buses – Route 801 and Route 803 – that run between North Austin and South Austin. Rapid buses run every 12 to 15 minutes during peak weekday hours and every 20 to 30 minutes on the weekend. Single rides cost $1.75.

MetroRail runs between Leander and downtown Austin during the week, and from Lakeline to downtown on Saturday. The Westin is less than a five-minute walk away from the Downtown Station at East Fourth and Neches streets. It costs $3.50 a ride.

Bus service ends typically around midnight, but Capital Metro offers Night Owl service in any late-night pinch. Night Owl buses run every 20 to 30 minutes from midnight until 3am, Monday through Saturday. You can catch a late-night bus from East Sixth Street and Congress Avenue to local neighborhoods in North and South Austin. Single rides cost $1.25.

zTrip also offers taxi or private black car service in and around Austin. Book online or through its app.

Fare is only available in Austin and Phoenix. Rates vary per vehicle type, but the lowest base fare is $2. There's no surge pricing, and riders can earn credits for referring friends. The premium class SUV can hold up to seven people.

Fasten is only available in Austin and Boston. Like Fare, Fasten doesn't charge surge pricing.

Get Me riders can choose a sedan, an SUV for large groups, or even a limousine. Rates vary for the ride-hailing/delivery service, but you don't have to worry about surge pricing. All AAN activities are in the downtown area, so unless you plan to travel somewhere else, you won't need to rent a car. But if you decide to, here are a couple of options to consider.

Car2Go: You can access one of these easily recognizable blue-and-white electric cars from dozens of locations downtown. Members unlock the car with the car2go app, turn the key, and drive for less than 50 cents per minute. No need to return it to where you found it, and no need to pay at meters – that’s included already.

Members can use ZipCar's app or website to reserve a car for as little as an hour or for as long as a week. Rates start at $9.75 per hour or $74 per day depending on your membership plan. Pick up your ZipCar at its designated downtown parking spot and return it there once you’re done.

Austin has a plenty of bike-rental options for people who want to see the sights from two wheels. Here are some in the downtown area:

Austin B-cycle kiosks are located throughout the downtown area. Pay $8 for all-day access or $15 for a three-day adventure, plus tax. Each access pass includes unlimited rides up to 30 minutes (each additional half-hour costs $4 plus tax). One caveat: you must first purchase an access membership with a credit card before you can ride. Download the B-cycle app to see bike and station dock availability.

Austin Tri-Cyclist
923 Barton Springs Rd., 512/494-9252
Take a stroll over the river to Austin Tri-Cyclist, where you can rent an urban hybrid or cruiser style bike for $10 an hour or $35 a day. Sign up online, or call to make a reservation. Road and tri-bikes available upon request.

You can find detailed map of bike routes in downtown Austin here.

You'll see pedicabs cruising – at reasonable speeds, of course – throughout the city’s core. Before you hop on, ask the pedicab driver about their rate – prices vary per trip or per rider.