Gifts From the Greenhouse Started seven years ago by Hutson, an Austin native and horticulturist, the Tillery is run by an uber passionate staff. They try to stay on trend with an active social media presence catering to the influx of younger people in the area as well as longtime neighborhood residents – expect to see both abuelitas and scooter riders carting home low light mother-in-law's tongue. The gift shop carries eclectic local artisan merchandise like macrame hangers and colorful glazed containers.

Seeds and soil are available but tropical plants are the biggest sellers – fiddle leaf ficus, philodendron, and nasturtium, as well as native and hardy specimens chosen to weather the Texas clime. On the edible side, wander through rows upon rows of tried and true fruits trees like sour Mexican plum dotted with petite fragrant flowers, pungent herbs, and curated seasonal veggie starters. Friendly staff like General Manager Lindsey Mayer are helpful but don’t hover. “We’re all just genuine people who love plants,” she says.

The space is an organized maze dotted with decades old pecan trees so it’s easy to wander into the other store and not know it. You can flow back and forth, like resident cat Pamela, who doesn't recognize a distinction between the two businesses. (Just make sure to pay at the respective checkouts.)

Plant life is all around but the greenhouse lets you know you’re at East Austin Succulents. Racks of unconventional containers flank the entrance and inside, filtered lighting perfect for an aesthetic Instagram shoot. Wispy tillandsia dangle from sea urchin shells, and woody cacti, gemstones for chakra alignment, and tiny dinosaur figurines are artfully crammed into every crevice. Owner Eric Pedley says he never planned to own a retail garden space. An addictive collector of flip ball cards and Mad magazines as a kid, he fell into his next passion after one day winning plants in a raffle. “You’ll never have every single one,” says Pedley. “There’s just so much variety for somebody who loves collecting.” His interest blossomed from selling arrangements at local farmers markets and on Craigslist with co-owner and partner Julie Patton to a full-blown company occupying the greenhouse.

“I don’t mean to brag,” says Pedley, “but I’ve never seen a retail store have as much variety as us.” And he’s not kidding: The number and diversity of plants for sale is dizzying, from miniature jades and white rhino aloe to alien dorstenia gigas and stone-like lithops. Always on the hunt for the unusual, Pedley has scored tons of hard-to-find sucs.

But don’t be intimidated – care of these low-maintenance creatures is pretty straightforward, perfect for your kill-anything-living black thumb friend. Browsing the succulent selection, customer Molly Shetter explains why she’s drawn to them. “They’re so resilient,” she says. “A succulent leaf falls off and makes a new plant.” Co-owner Patton offers some easy advice for newbies: “Indirect light, check the soil, if it’s damp, don’t water.”

Whether you’re buying for yourself, or looking for a gift (they also do custom arrangements), the team at East Austin Succulents is there for you. “We’re just a small business focused on good customer service and people and trying to brighten up people’s lives with plants,” says Pedley.

Editor's note: This story originally misstated the first name of East Austin Succulents owner Eric Pedley. It has since been corrected. 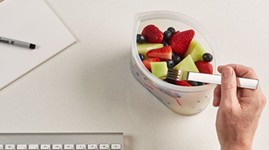