Where Did Valentine’s Day Come From?

Love is in the air like a brace of lepidoptera, iridescent membranes flapping like the beat of a thousand paper-thin hearts. What did they morph from, these metaphorical insects d'amour, and who would disparage their larval stage in favor of the flighted form, to shun the worm yet woo the wings? 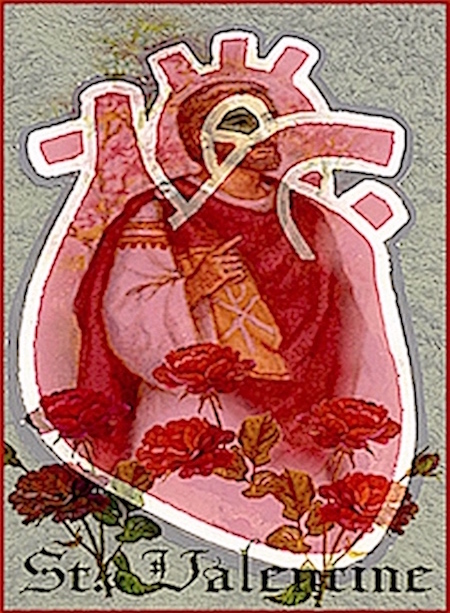 Yes, lover, even saints can get a heart on.

All things change, of course, and love no less than others and more than most. A time of infatuation may be the only hour that never stretches, the emotions shifting swiftly along a course less straight than that of Cupid's drunkest arrow toward some far terminus of romance.

And the day that celebrates this multihued passion, the day named in honor of St. Valentine? What are its origins?

Jump ahead to the advent, so to speak, of Christianity, and to the repression of all things sexual. Juno's rantum-scantum lottery just couldn't cut the ecclesiastical mustard, and something had to be done. One something was to replace the women's names with those of saints and short sermons: Young men and women were expected to emulate the life of the saint whose name was on the billet they'd drawn. You can imagine what a box of chuckles that turned out to be.

So, to re-educate those of the partying public who still preferred forming the two-person tortoise to sitting around in a hairshirt, the church decided a bit of revisionism would be just the thing. Out with the old gods and in with the new. Juno, man, she was yesterday's news, and quicker'n you could say quod erat demonstrandum, all mention of her or of Lupercus was disappeared. The happenin' kid on the block was a saint, went the official word. A saint, um, let's see now ... Valentine? Yeah, that's the ticket: St. Valentine! One of ours! And listen, bub: Old Val is why all this celebrating started in the first place, capisce?

Bullshit, yes. Fake news, even, you might say. But that’s how it goes when a single entity controls the media, and St. Valentine’s day was officially set as February 14 by Pope Gelasius I in 494 C.E.

But, wait. Saint … Valentine, you say?

You mean the Bishop of Interamna who was martyred circa 271 C.E.? Or was it the priest that Emperor Claudius had executed for marrying couples in secret? Or maybe it was a different priest who'd been subjected to much badmouthing and a little beheading for having dissed Jupiter and Mercury in the still-mostly-pagan days? It didn't really matter: The papal instrumentality simply fabricated a bio and set their propaganda loose and their soldiers onward and extinguished the public spark of Juno for good.

However, the human spirit being resilient and love conquering all and so on, people eventually returned to using women's names instead of saints. At least there was that. And soon thereafter, in the 14th century, the custom of sending love letters on St. Valentine's Day began in England and France. By the 17th century, it was handmade cards; then, in the 18th century, commercially manufactured sentiments raised their little popcult heads. Decades passed, and the celebration grew increasingly secular; the festival was finally dropped from the 1969 Roman Church Calendar.

These days, it's a largely Hallmark time for many of us, and heart-bedecked cards accrue in piles – for the lucky ones – like so many paper butterflies resting their polychrome wings. But you know that even the blue morpho's got a flightless past, and you know that those cards began life as nothing more than points of affection worming their way deep into the hearts of your loved ones. And you know the transformation's not complete, nor will it ever be, and that over time what we call love may move from the fragility of a swallowtail's wing to a strength beyond the history of insects in this world.

Of course, yes, that sort of love does require a bit of work.

It's just a little easier than flying.