College Confessions From the Dorm's Snitch

When my Fasten driver started to brag about his college debauchery, I don’t think he understood who he was talking to. Others may enjoy hearing of the wild parties of Jester dormitory lore, but I was experiencing a very different kind of blackout to the one he alluded to. Cleaning up other people's messes: This former RA has seen it all

As he detailed his Eighties-era alcohol consumption – where a dorm party featured separate rooms for every liquor, making the floor’s hallway into some kind of boozy game of hide-and-seek, including one unfortunate room dedicated just to vomiting – I fought my instincts. As a resident assistant for two years, it would have been my job to end this underage hooliganism. Those habits die hard, which made it particularly difficult to fake a laugh as he described puking all over the dorm-issued, faux-wood, and fire-resistant furniture. I thought of the poor RA who likely had to mop up his barf, wishing on the Stardust they used to clean it that they were anywhere but there.

As you might expect, life as an RA toes this line of illicit excitement frequently. Have I confiscated vast amounts of alcohol? Yes. Accidentally been hot-boxed during a moment of drug safety training gone wrong? Yes. I’ve seen enough naked bodies, enough shades of throw-up, and enough filthy rooms to rival the most precocious frat boy. And yet, in my tenure as the residence hall’s local cop, I had to accept my status as the buzz kill. I mean, if I’m being honest, RAs are the college equivalent to being homeschooled: You may be smarter, but you’re certainly not cool.

Because, after all, no matter how many pizza parties I threw, no matter how many mocktails I made, my crafting and sex-ed events just didn’t have that certain je ne sais quoi of the nearest drunken rager at the neighborhood’s Greek house. Try as I might to stifle the urge to drink in 18-year-olds, it’s a Sisyphean task. Every Friday and every off-campus party offered another way to get new students stoned, wasted, and suited up in a metaphor-appropriate toga. It was a good night when I found the student with the toga still on, rather than peeing naked on a study room chair. I took the job to give guidance and become close with new students, but cleaning up their urine was an intensification of those ideas that I never wanted to see manifest.

Of course, there are those that don’t partake in the college cliches. I am pleased to say that some students only ever came to me for the wholesome reasons I anticipated: roommate problems, study help, homesickness. There were even those that eventually tire out and pledge to a life free of depravity (my Fasten driver clearly not among them), and to these I say, welcome. Give me your huddled masses, yearning to breathe weed- and tobacco-free. Send me your homeless, those who have lost their keys for the 200th time (each instance resulting in a $75 charge). I am the eternal RA. I can’t promise to liberate you – because a lot of the time I do have to call the cops – but I will be the one to unhappily clean up your urine and then maybe become your unlikely, responsible new friend.

Want more tips about life on and off the quad? Visit 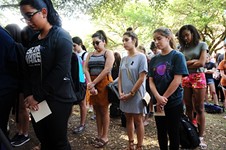