The Q&A Hole: Why Are So Many People Unhappy With President Trump?

We felt we had to ask. Because, before the election, we asked Why Would Anyone Vote For Donald Trump? And fuckin’ look at the country now, right? 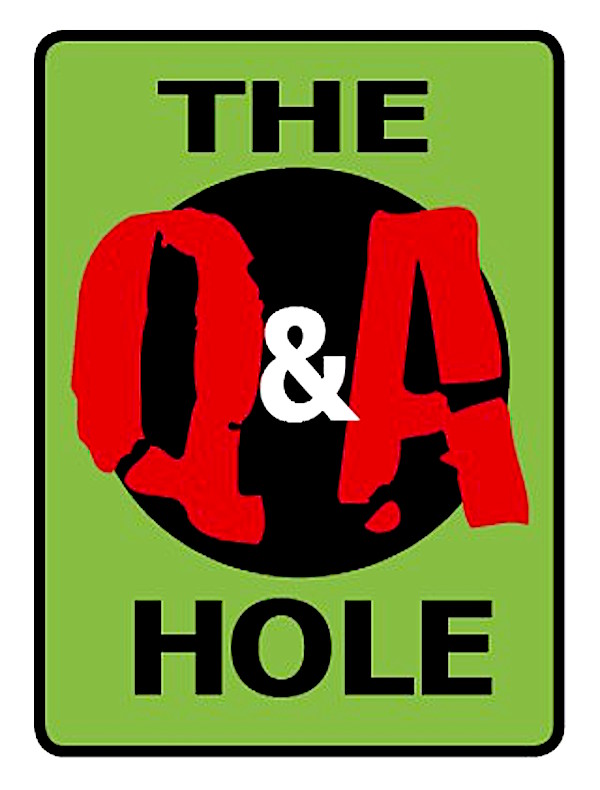 So we queried several of our talented friends and neighbors last week, asking Why Are So Many People Unhappy With President Trump?

Jeanette Moreno King, cartoonist and animator: HAHAAHAAHHA *inhale* HAHAHAHAhahaha …There isn’t enough time in life to list all the reasons.

Cathy Haynie Savage, printmaker: He's an ass. He's like a schoolyard bully. I mean, his London attack tweets were beyond the pale. Who says that stuff? Good grief. I don't agree with any of his policies, so I already didn't like the guy. But the fact that I have zero respect for him is all because of his doucheiness. That started before he ran for office, honestly, but he continues to get worse. I have family members that voted for him, too. Unfathomable.

Nick Mamatas, author: A few reasons. In order of importance: 1) He's made it fun and easy for people to embrace fascism and publicly organize. 2) He's pretty stupid, but he got to be rich, famous, fuck models, and now be President. 3) Because he's President, there's no higher authority to appeal to. This one we can call "The Constitution, lol, like that ever worked!" grievance.

Debra Broz, artist: I believe Americans are most upset by the knowledge that, despite extreme wealth, a person can still be burdened with pumpkin-colored skin and terrible hair. Isn't the American dream to be rich and beautiful? How is it, for this man, that beauty is so out of reach? With all the advances in special-effects makeup and plastic surgery, you'd think he would have solved this obvious problem. Also, he's a piece of shit.

Kristi Coulter, author: Because he reflects our own horror back at us. Maybe you're horrified by Muslims, Mexicans, and a world that changes. Or maybe it's rape culture, kleptocracy, and savage idiocy that scare you most. Whatever it is, Trump embodies it so viscerally that I'm a little surprised it didn't top the White House list of achievements for his administration's first hundred days.

Jeanne Thornton, author and cartoonist: Trump is our psychic stepfather now: any qualities he has are also, by the commutative property, qualities we have. So what are his qualities? He's someone who simultaneously manages to do no real work of governance, yet who also casually damages our country via neglect and ignorance to zero advantage. Imagine a boss who doesn't turn in things when he says he will and blames you for it, a boss who tells gross racist jokes to the heads of the company's biggest accounts and calls this strategy. His vanity requires anyone who wants to be ethical to work to clean up his swath of personal/professional destruction, like he’s throwing good people’s time and energy into the burning mouth of the serpent god Vaal. He disparages virtue and encourages vice, takes good things and turns them bad. If you’re happy with this, honest question: Tell me what you even think “happiness” is?

Rachel Koper, artist & curator: His hate-mongering and incompetence, would be my guess.

Ann Ciccolella of Austin Shakespeare: Many people can now see that Trump regularly behaves with disregard for facts. Clearly, his personal inconsistencies don’t bother him. Daily, he shows his disregard for our Individual Rights, the Rule of Law, and the U.S. Constitution. While he ran as a Republican, supporters associated him with limited government; now we can all see that Trump is anything but an opponent of Big Brother. “Providing jobs” by politically pressuring companies like Carrier to produce their goods domestically, or repealing Obamacare only to replace it with some new combination of government manipulation, and threatening anyone in the press who dares to challenge him – these demonstrate Trump’s nature as a demagogue. Want a solution to our crisis? Read Ayn Rand with an open mind – how poignant is the title, Capitalism: The Unknown Ideal.

Hilary Thomas-Oliver of Ponytrap: Oh, geez. I'm not just unhappy with him (incompetent, misogynist, racist, xenophobe, greedy), I'm unhappy with the culture that elected him (see previous parenthesis). People have become very invested in their fears. It makes me so sad.

Jay Whitecotton, comedian: People hate Trump because he shows us what the world would be like if Billy Zabka beat Ralph Macchio in that karate tournament. He's the prototypical Eighties movie villain, but suffers no consequences for his actions and pretends every loss is actually a win, all while acting cocky about it. For many, Trump proves our childhoods were a lie. The truth was: 1) Johnny sweeps the leg again. 2) Ducky succumbs to depression. 3) The Goonies say die. 4) Axl Foley is pulled over and shot in a routine traffic stop. 5) Ferris Bueller kills a mother and daughter due to reckless driving. 6) The Nerds lose the Boat Race, the Ski Race, the Frat House, the Golf Course, the Pirate's Gold, the Girl. Donald Trump shows us that even though the nerdy teens from Zapped! won the day, they still grew up to be the celebrity face of the conservative caucus – and the Bibleman, a direct-to-video Christian answer to a question nobody asked.

Marshall Ryan Maresca, author: I could write an entire novel's worth on why people are unhappy with President Trump, because there are so many legitimate reasons. For me, the main reason is how he embodies the valorization of ignorance, this worst stereotype of Americans who are proud about being unworldly and small-minded. But what I want to ask is, why has this tangible unhappiness not resulted in more politicians running away from him? You’d think at least some Republicans would shift with the ill wind, and a tenth of the amount of scandal we've seen here has destroyed most political careers – but Republicans all seem ready to stand through the hurricane.

P. Kellach Waddle, musician and composer: *shrugs, rolls eyes* If you have to ask …

Amanda Stilwell, artist: Hah! His blatant disregard for the dangers of tanning. (That’s actually from the mouth of my assistant, David Shangle III.)

Katie Stone, comedian: Personally, I see him as a president who disrespects important separations of power (and free press) in order to execute his own personal vision – one built on revoking important strides toward racial and economic equality in order to further pad the coffers of the über-rich and appease the privileged class.

Liz Cass, opera singer: Trump is like the Abusive Dad type: Sometimes he's nice and sometimes he's mean, but you never know which one you're going to get and that is the most dangerous of all. Well, he's like that except for he's never the Nice Dad – unless you're Ivanka. He used to be kind of like Funny Dad, back in the Eighties, on that show about rich people, Lifestyles of the Rich and Famous. If one were to create a painting of his thoughts and ideas about government policy, it would look like a Jackson Pollock, maybe with a dash of Communist Realism. He’s unclear about everything save making sure he and his family have more than they need and are well taken care of. In some ways, I think a lot of Americans can identify with that or would like to be able to identify with that – like he's some kind of fantasy ideal that those who voted for him might achieve.
For so many of us who are unhappy with him, the abuse of power, reckless immaturity, and carelessness are too much to bear. His leadership style is one that encourages fear, paranoia, isolation, denial, and racial bias. I recently visited the Pacific War Museum in Fredericksburg; it’s so thoughtfully curated and equally terrifying. They do a great job of laying out in great detail the history of power and abuses of power that led to WWII – and it’s the same old story. Too much of that history felt familiar. George Santayana said it best: ”Those who do not learn history are doomed to repeat it." So what do we do with a President who knows history and is intent on repeating it?

Spencer Parsons, filmmaker: The sheer ugliness of the man’s character comes as a genuine shock to some of us. Certainly, it does to me. The national veneration of meanness, bullying, dishonesty, and decadent self-pity ratified by the election of this President still feels impossible months after inauguration. We protest how wildly out of character his antics are for the United States we thought we knew, while disappointed friends and gloating frenemies offer alarming confirmation. It’s as if we found the police gathered at the house of that nice neighbor who never made any trouble, recovering corpse after moldering corpse from shallow graves in his basement. Except it’s not the neighbor. It’s us. Our president must, in fact, represent a controlling share of our national character, or this simply wouldn’t have happened. But we seemed so nice, we say. We told everybody that foul odor was a dead raccoon.
Maybe we don’t remember the murders because in our horror and shame, we disassociated, shut out the trauma. Some of us thought we’d dreamed it all. Some blamed the devil, some the neighbors, and some conjured vast conspiracies by way of exoneration. A few entertained us by recounting directives from the neighbors’ talking dog, and the most disturbing among us simply and forthrightly blamed the victims. We warned the papers of more to come and boasted we’d never get caught.
And now, our pleas of innocence and opposition to the crimes don’t let us off the hook. Can’t and won’t. Because in the end, it’s our house, our basement, our corpses, and the warrant for our arrest. I suppose that’s plenty to be unhappy about.