EarthShare of Texas invites you to enjoy bats, birds, and barbecue

It’s a matter of magnitude, baby.

You know that there are approximately 2 million bats under Austin’s Congress Avenue Bridge, right? That’s why so many people gather nearby, both locals and tourists jockeying for position on the bridge, on the river’s grassy shores, night after night, to see those odd and wingéd varmints take to the sky.

Yeah, we know: Our minds are a little blown, too.

But of course San Antonio is, what, about an hour away from Austin, even if you’ve got a working car?

And maybe that’s too far a drive, just an hour, to see the world’s largest bat colony? To watch the sky turn black as twenty million flying mammals exit their subterranean bedroom community and go all aerodynamically intense as they obscure the vault, the vault, the vault of heaven?

We don’t think it’s too far to drive, citizen.

It’s especially not too far to drive on Saturday, May 20, when EarthShare of Texas presents their Bats, Birds, and Barbecue event at Bracken Cave – and accompanies the skyward exodus of those millions and millions and millions of bats with 1) a presentation on wildlife conservation methods, 2) a meet-and-greet with avian raptors, 3) a down-home barbecue feast prepared by Rosemary’s Catering, and 4) live music.

All of which is why we’re looking forward to hearing the news from Fran Hutchins and Jessica Cochran of Bat Conservation International, Erich Neupert of the Blackland Prairie Raptor Center, and the National Wildlife Federation’s Karen Bishop. And to maybe rubbing elbows with an owl or a falcon or two. And nomming on some tasty ‘cue while 20 million Mexican free-tailed bats perform their manically flapping broken-umbrella maneuvers against the San Antonio sunset.

Tell you what: When those fierce environmentalists at EarthShare of Texas decide to celebrate their 25th anniversary with a shindig like this, they’re doing it up right.

And we reckon we’ll see you there! 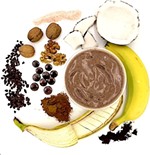 The Soup Peddler: Eastside Bound
Acclaimed eatery’s first location on the sunrise side of I-35