Fiji mermaids, vintage toys, and a Cathedral of Junk

See for yourself how Austin's famed weirdness manifests itself at these off-the-beaten-path shops, galleries, and curiosities.

Museum of the Weird

www.museumoftheweird.com
Who doesn’t love a hoax? Steve Busti’s Sixth Street homage to the dime museums of the 19th century features, among other weirdnesses, shrunken heads, the Texas Bigfoot, mummies, the Fiji mermaid, and the Minnesota Iceman, a manlike creature in a block of ice that was said to be a missing link between men and Neanderthals. Museum of the Weird (Photo by John Anderson)

www.facebook.com/cathedral.of.junk
Standing as a 60-ton monument to consumerism, South Austin’s Cathedral of Junk is just what is sounds like: an amazingly engineered junkyard put together with care and artful craftsmanship by Vince Hannemann, on whose private residence it rests. Here, tourists can wander the many spires and piles of displayed treasure that was once someone’s trash. This is Hannemann’s private home, so you’ll need to call ahead to make an appointment. 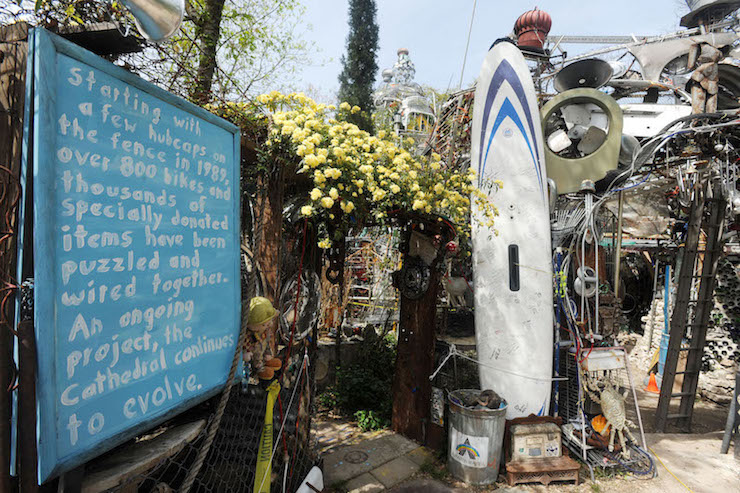 Museum of Natural and Artificial Ephemerata (Photo by Shelley Hiam)

Museum of Natural and Artificial Ephemerata

www.mnae.org
One of the few family-run, in-house museums left in the States, the Museum of Natural and Artificial Ephemerata displays Jen and Scott Webel’s collection in a single room stuffed with a minglemangle of objects, from the butt of the last cigarette Marilyn Monroe ever smoked to a bottle of red rain from India to a yeti toy, donated by a female rabbi. At least that’s what the Webels will tell you – how much of it you believe is up to you.

www.guzugallery.com
When does comic-book art approach or match the level of "real" art? When are the best illustrators of pop culture afforded the sort of elegant treatment their polychrome brilliance deserves? Where can you find Dunnies and Munnies and Koziks and Banksys and Doyles and more, whether as limited-edition prints or collected hardcover volumes or even, sometimes, originals? Here, right next to Austin Books & Comics in the so-called Center of Austin Fandom. Guzu is primarily an emporium for primo pop collectibles – vinyl toys, art books, screenprints, graphic novels, statues, and the like – but wall space at the rear of the store offers a rotating series of exhibitions related to comics, sci-fi, fantasy, horror, and other pop-cult realms. hopecampaign.org/hopeprojects/hope-outdoor-gallery
Like quiet custodians of B-boy culture, the constantly changing murals of the paint park at Castle Hill stand watch over Central Austin. The site of a planned condo development in the Eighties that was abandoned, the standing concrete foundation and walls became open-sourced, publicly curated graffiti canvases. In 2011, the HOPE Campaign, with support from the property owners, was able to make the space an official arts venue and christened it the HOPE Outdoor Gallery. Artists can add to the existing work by obtaining a Paint Pass from HOPE. Spend an afternoon perusing the huge murals and “pieces,” but watch your step … there’s some admittedly dangerous footing around. mondotees.com/blogs/gallery
This modest gallery space is the brick-and-mortar home of Mondo, the pop-culture collectible print arm of the world-famous Alamo Drafthouse movie theatre chain. Founded in 2012, it hosts regular gallery shows, either concentrating on a theme or property (Universal monsters, Adventure Time, Game of Thrones, to name a few) or solo artist exhibitions. Limited edition prints and original art go on sale here first before heading to the internet, so joining the long lines on opening night is often your best way to score a sought-after piece. The store also carries most Mondo vinyl and Death Waltz Recording Co. soundtrack releases, and a souvenir hand-cranked penny press for cheapskates. southpop.org
Preservationists of Austin's ruggedly eclectic heritage, "SouthPop" serves as the pre-eminent museum of our city's wonderfully weird music culture. Chief among collections of exalted ephemera are works of poster artists, from Jim Franklin's Vulcan-ic psychedelia and Armadillo Art Squad sketches to colorful prints by Kozik and Kuhn. Concert photography and musical artifacts are also safeguarded at the Planet K annex, outside of which a funky memorial wall honors departed local heroes. SouthPop, operated under the care of Director Leea Mechling, is “open by appointment or by change.” https://texastoymuseum.com
The ultimate celebration of the beloved playthings of your youth, appreciated as the little pieces of art that they are. From G.I. Joe to the Simpsons, My Little Pony to Masters of the Universe, Texas Toy Museum boasts dioramas and displays of all the great toy franchises, plus rarities, oddities, prototypes, and a wall of classic home and arcade video games. Plus, if the massive collection puts you in a playful mood, then sign up for classes in figure sculpting and mask making.