The Q&A Hole: Which Restaurant for the Rest of Your Life? 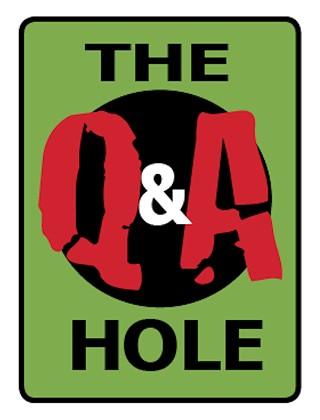 Yeah, the old Q&A Hole was getting a mite heavy of late, wasn’t it? So we decided to skew a bit lighter this time, let the only heaviness be in the rhetorically accrued calories attendant to this latest portion of our ongoing series.

So we asked a small array of citizens – in Austin, in Portland, in Chicago, and more – this question:

If you got to (or had to) restrict all of your eating, for the rest of your life, to just one restaurant out of all the restaurants you've ever eaten in … which one would it be, and why?

Ben Snakepit, cartoonist, musician: Oh, that’s easy: It would be Tamale House on Airport (before it closed, obviously). When it was open I ate there as often as I was able to wake up before 3pm. Proud to say I ordered every single thing on the menu, even a pint of rice and whatever random cookies they had. Nothing says "delicious" like a bunch of grandmas making tacos in an un-air-conditioned concrete room.

Christopher Garlington, writer, gourmand: I live in Chicago – a city with a galaxy of Michelin-starred, world-class joints. Deserted-island choices like Alinea and Longman & Eagle and fucking Tru (can we talk about their caviar flight?) are spittin' distance from my La-Z-Boy. But fuck 'em. Please plop my fat ass down at the bar at Lee & Ricks in Orlando and shuck me a couple million Crystal River oysters and I'll be fine.

Shannon McCormick, actor, improviser: There’s a place in New Mexico called Chope’s, in San Miguel. It’s about 45 minutes outside of Las Cruces, where I went to grad school. It’s like legit, hardcore New Mexican cooking: Enchiladas with a lard-fried egg on the top, chile rellenos with, ah, yeah – that’s my answer: I’m going to Chope’s. The menu is limited and it’d probably kill me in a year if I ate there every single day – lard, dude! – but it would be worth it.

Fritz Blaw of Motorblade: Austin's Bouldin Creek Cafe would be my choice, I believe. Bouldin has a wide variety of healthy food with daily specials – yum. And a yuge poster wall to repopulate with my lifeblood/playbills. And, last but not least, staff that chat with me like pals – because we kind of are. Neither least nor last is Leslie Martin, the owner, a beacon of South Austin and someone who actually works at the restaurant they own. I love this place.

Patty Leidy, cartoonist: For a while I was squired about town by a gentleman of means who was quite the wine expert. He took great delight in treating me to some of the finest restaurants in Denver – so that is a tuff question. But: Bistro Vendôme. Chef and co-owner Jennifer Jasinski … award-winning … Zagat four-star rating … seasonal changes to menu so I would always be surprised and delighted. I had a lamb dish there once that literally sent me twitching in spasms of delight. And if money is no object, I think I could find something fun every time. Plus the atmosphere is romantic, with outdoor patio, twinkle lights in trees, desserts to send you into a sugar coma of orgasmic chocolate delight …

Mo Daviau, author: Tacodeli. Fellow former Austinite Phil Ajjarapu and I spent a bitchy brunch session at one of Portland's "Austin-style" eateries (yes, we have those – where are the Portland-style places in Austin?) complaining about our food. The migas was adequate; the breakfast tacos overstuffed. We were miserable even though there was nothing constitutionally wrong with our fake Austin food. We later figured out that our boredom was because it wasn't Tacodeli. All unhappiness is caused by comparison. While it is gauche to compare a lover to another, it is understandable to compare a taco to a Tacodeli taco. Tacodeli is like that one unforgettable lover that touched me all the right ways. Tacodeli never broke my heart.

Chris Tellez, comedian: I would have to go with Golden Corral. Where else you gonna get some Italian with a side of meatloaf and egg rolls? And it goes without saying but G.C. is also a dating hotspot: The ladies love it. Not convinced yet? They're also open on Thanksgiving – which is where I will be spending mine. Again.

Chris Nicholas of Staple! Independent Media Expo: Ugh, what an awful scenario! I guess I'd have to say Luby's, because then at least there'd be some variety (although I'd probably always have some coconut pie). Alternately, I'd pick wherever my friend Michael Barnes works, because I know it would be good – and I could probably talk him into occasionally making a coconut pie.

Miracle Jones of The Fiction Circus: I have basically tried to do this in my life by privileging diners so hard, which are always striving to be some kind of "end to the agony of choice and variety in food,” sort of a postwar prefab Soylent, but with more rats. So my own personal choice would be an Ideal Diner, one with chrome and plastic everywhere and giant gleaming pies under giant gleaming glass. I cannot easily name this diner since it is so ideal and interpenetrates every other diner that has ever existed, an American Catholic food-church that has its own rituals and mysteries and discipline. But, for reference, the closest namable institution would probably be House of Pies down in Houston. Ideally, this perfect diner would have a world-class Italian chef running the place, who I would be emotionally torturing on a regular basis by ordering stacks of pancake and ham, hamburgers and shakes and breaded-chicken sandwiches and hash. My friends would come into visit me as a result of my horrifying existential plight of never being able to eat anywhere else, but – as a result of the relative crappiness/casualness/sublimity of this ideal diner – we would cackle and drink and eat and get high as shit in the bathroom and drink gallons of coffee and my friends would never leave because I would never leave and the world-class Italian chef would hate us and try to kill us with "what we wanted" as a result of that hate. But then, sometimes, when it was just me working late on something, clacking away on my laptop, the chef would ooze over to me and say: "How about I make you something nice, you know? Something healthy for your bones?" And I would nod and smile and he would fill me up with sausage ragu served steaming over homemade pasta or some killer lasagna he made only for the staff, able to splurge on the ingredients by embezzling from his cash take like a total lovable, unforgivable scumbag. We would respect each other in those moments and it would keep us going. Thank you for making me think about this.

Regina Allen, artist: The restaurant my dad used to own in Nashville, Tennessee: The Wild Boar. It was a fancy-pants place, but the ingredients were wonderful, and they featured wild game and a great wine list. Being the daughter of the owner I never actually had to buy my own meal there, so I was free to enjoy them without the sticker-shock. The restaurant and my dad have both passed on, but I have lovely memories of the epic meals I ate there with friends and family.

Charlie Stites, actor: I would say Asia Cafe. There are something like 150 items on the menu, and I never yet have gotten tired of rice.

Hank Cathey of Fusebox Festival: It would be La Fruta Feliz on Manor. Because 80 percent of my diet is tacos, and their corn tortillas, salsa, picadillo, and barbacoa are all amazing. I've already tested this; I used to live around the block from them and ate there almost daily.

Jennymarie Jemison, graphic designer, actor: Any restaurant in Casale Marittimo, which is a tiny commune in Tuscany. I've never had such rapture in feasting. Not just the flavors, but the beauty of everything. The way the food is so simple, and all the ingredients are from the neighborhood around you. Even the olive oil is freshly squeezed from the trees you’re sitting under. When I was there, I toured many vegetable gardens, breathlessly, in wonder, and lots of them had been torn up in places by wild boar, which had a ballooning population. And consequently, cinghiale ragu was on every menu. Truly farm to table. Paradise on earth.

Lydia Pyne, anthropologist, science writer: If it had to be in Austin, I’d go with Guantanamera, which is a Cuban place on West Gate & William Cannon.

Jodi Egerton, writer, improviser: Have you ever done brunch at Trio at the Four Seasons? Hoo-hoo-hooooo! I did that once with my family. They have these deviled eggs with a tiny little bit of roe/caviar situation on it? I don’t know, I never liked a deviled egg in my life until I ate that one, and then I was like, “I NEED TO EAT THAT EVERY SINGLE DAY.” So, if money was no object … but, otherwise, Curra’s. Because, yeah, some molé enchiladas, and some breakfast tacos, and avocado margaritas – I could maybe do that forever.