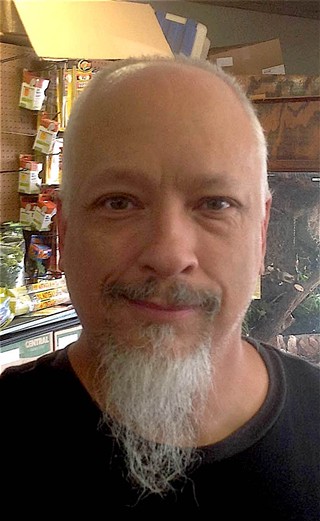 Well, hold on a second there, hoss. It’s not exactly new, of course, this tarantula: It’s been around for however many tens of thousands of years after it evolved to its particular speciation. But the creature’s newly named, is the thing, and we’re telling you about it right now because it was named after David Moellendorf, longtime manager and arachnid wrangler of Austin’s own ZooKeeper Exotic Pets.

How, we wondered, does a person get to have a particular species named after them, to have that name officially registered in the scientific literature?

“Chris Hamilton and a couple of other gentlemen worked on the tarantulas of the United States,” says Moellendorf.

[Note: You may recall the news item from a few years ago, of this Hamilton naming a species of tarantula after Johnny Cash.]

“And I introduced Chris to the tarantulas of Texas,” says Moellendorf. “And one of my old study species, which comes from around Val Verde County, turned out to be a new species. And the specimens that Chris got from me – which were preserved – are the only specimens of that spider that are known. Which are all males, because the males come out wandering. And I helped Chris when he was doing collections, and this was his way of thanking me.”

Hell of a fine reward, we’re thinking – sort of the arachnological version of earning a star on Hollywood’s Walk of Fame.

“I’m really honored,” says Moellendorf quietly, almost blushing at the thought of it. “I always thought it’d be kind of cool to have something left behind, you know, and this – this is a big thing. I think it’s still hitting me.”

And the creature itself? The hairy, eight-legged, and previously unsung denizen of Val Verde County? What’s it like?

“The spider’s one of only six species in the Aphonopelma genus in Texas,” says Moellendorf. “It exists – as most of the spiders in harsher country – under rocks and that sort of thing, so its habits are similar to other spiders. It’s got sort of a brassy green thorax and blackish legs. Right now I’m working with someone, to get specimens for him to do photos of live males and females – and the variations across the range. And I’ll, hopefully, have some breeding in captivity, so we can provide offspring as well.”

A spider nursery! A binky, we imagine, for every pair of fangs! But what chance does the general public – or at least the tarantula aficionados therein – have of acquiring a bona fide Aphonopelma moellendorfi of their very own?

“We’ll also,” Moellendorf adds, smiling, “have those captive-born babies for sale here at the store.”