Why Can't We Bee Friends? 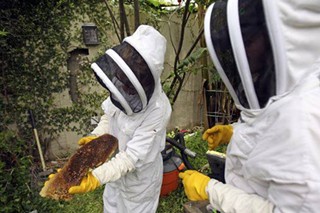 Central Texas Bee Rescue and the W Hotel hosted the second annual Black & Yellow Gala and Fashion Show yesterday, using the open-air pool deck despite the steady drizzle coming down throughout the event.

City Councilman Mike Martinez took the microphone to help start the festivities, recalling his first meeting with Walter Schumacher, CTBR’s founder and ‘Bee Czar.’ Since then, the two have worked closely, successfully getting passed an ordinance that protects beehives within city limits. The ordinance requires city workers to call Central Texas Bee Rescue to remove a hive, instead of destroying it, as they would previously have done. Austin Police Chief Art Acevado was also in attendance.

The event included a fashion show, with styles from Capra & Cavelli modeled by the friends and family of Central Texas Bee Rescue. Jars of honey produced by the rescue’s bees were sold for $100, a price that included a raffle ticket to win a $4,000 diamond necklace donated by Diamonds Direct.

The Austin Winery, Patrón Tequila, Tito’s Vodka, and Jack Daniel’s Whiskey supplied complimentary beverages, which undoubtedly helped loosen the wallets of the guests participating in the auctions, live and silent, being held throughout the evening. Del Castillo and Ray Benson provided the musical accompaniment to the festivities.

According to Schumacher, the evening was a total success both in increasing awareness for the rescue’s work and raising money so they can continue to offer hive removal free of charge.

SXSW Daytrip: San Marcos With the 'Yakona' Crew
The filmmakers behind the eco-doc take us to the river 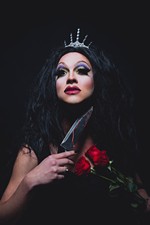 Ready to Get 'Nasty'?
Local filmmakers mine talent from Austin drag scene