The Drink/Drank/Drunk Issue: I'm Going to Need to See Some ID

Who doesn't remember their first trip to the liquor store? 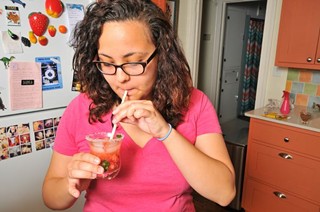 The author enjoying a refreshing cocktail (photo by John Leach)

Somebody I know is always turning 21. Hell, even if I don’t like that person at all, it’s an excuse to get my drink on. As with any other type of party, you should never show up without a gift. And now that I’m of age, it’s more or less expected that I come bearing the gift of alcohol.

I’m so new to being 21 years old that sometimes I forget for a minute when people ask how old I am. I’m only seven months out; you’d think I would remember that party. I may not remember a whole lot about that night, but I definitely should remember the birthday cakes, right? Bartenders still squint at my brand new, horizontal, Big-Girl ID in a way that makes me squirm even though I’m a 100% legit. I’m comfortable ordering drinks when I’m out – margarita, Shiner Bock, no problem. The liquor store is a different story.

It’s creepy, for one. I’m totally alone, for two.

It’s always me and the random guy at the register. (By the way, when I say “always,” it’s not like I go to the liquor store all the time. I can feel your judgment.) It's hard to smile when you feel so incredibly juvenile. For all I know, he’ll think I’m 16 and shoo me out before I’m halfway in the door.

May I just pause for a moment to say: There will be no LINKS to SuperBad jokes in this blog?

Unlike McLovin, I try to mitigate eye contact as much as possible. Call me a wuss, I don’t care. Grab the nearest $20 vodka bottle and jet. Exchange awkward greetings with the cashier, then skedaddle.

But I’m no quitter, especially when it comes to booze. So, I went into South Lamar Wine & Spirits with the intention of rethinking my old standby birthday gifts. A close friend of mine has a birthday coming up in August, so this exercise could be useful when I’m shopping for him. There’ll also be time to save up if I find a cool bottle that’s sort of pricey. A 21st birthday should be classy, after all.

For every awkward liquor store story I hear, I know a person who went in there totally chill, knew what they wanted ahead of time, and joked with the cashier on the way out. But as I think back to my first few trips into the liquor store, I can’t help but look back and wonder about the mistakes I made. Was that cotton candy-flavored vodka a bad decision? I didn’t wake up in the hospital the next morning, so can we call that a win? Nothing is worse than cotton candy.

Oh my. I stand corrected. Buttered Popcorn flavored vodka? That’s a party foul if I’ve ever tasted one.

Vodka was my first stop. Usually, people grab the same, common brands peddled to peasant college students like me. But I made friends with the guy behind the counter, and apparently there are other, better options in the same price range.

Sobieski is 20 bucks. It’s made by Belvedere, so it’s pretty snazzy. Do you have to speak with a Polish accent when drinking a Sobieski vodka tonic? That should be in the rule book. A bottle of that stuff might also make me look a little less juvenile when I stroll up to the house.

Despite having learned a serious lesson about flavored vodka (okay, on more than one occasion), I’ll confess to being intrigued by the giant bottles of Deep Eddy Ruby Red. Fifth time’s a charm? It is local and named for Deep Eddy.

The wine section at the liquor store honestly mystifies me. I did wander around to find Thorin’s Viking Mead. I was given a bottle for that very same birthday. My friend drank more of it than I did, but he raved about it all weekend. What a cool gift. It’s worth it to poke around the store to find an interesting bottle for somebody’s birthday.

My friend would like mead, but I think something a bit stronger is in order. This is a landmark birthday, after all. After a quick consultation with my friendly liquor store associate, I figured out that Crown Royal is both easily recognized by inexperienced college-aged guys, and the best deal for whiskey in my price range.

This time, the time spent in the liquor store without pretending to have to rush off somewhere ended up being incredibly valuable. Next time I go in and I actually am in a rush, I’ll be able to make smarter decisions, and I won’t waste time waffling in the aisles.

Good, because there are birthday shots to do.

Read more stories behind the bar and deep in the jigger at austinchronicle.com/blogs. The Austin Chronicle's Drink Drank Drunk issue hits the stands Wednesday, July 3.