Summer Fun: It's a Pagan Thing, We Might Just Understand

Celebrating the solstice with some of that old-time religion 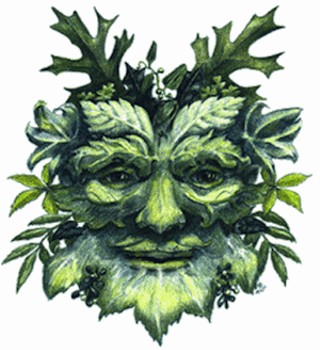 Some men are a little more green than others

Why are we calling this issue – this particular themed segment of content on the wubs and in the paper – the Summer Fun issue?

Obviously: Because. Summer. Is. Fun.

School's out, after all – as Alice Cooper so rockingly informed us back in 1972.

And even if you're not a student and so it's just more of the same-old same-old but with hotter weather, still, there's some vestigial feeling of greater freedom, less regimentation, and, yes, just plain fun in the air.

But for some people it's more than that.

Everybody goes nuts near the end of the year, of course, whether they're celebrating Christmas or Hanukkah or Kwanzaa or Festivus or Pikamas or whatever. And certainly there's no one unscathed, just a little later, by the dawning of New Year's Day. But who the hell celebrates summer? Who gives any sort of concerted hoot and holler about the solstice that occurs on June 21st of each year?

Tell you what: Pagans do.

Pagans give a hoot and holler about summer and its solstice. But how do they give a hoot and holler – or whatever their version of a hoot or a holler might be? What sort of rituals are performed on that longest day of the year? In what manner is the ancient summer holiday celebrated or, at least, noted in these modern times?

We asked a couple of practicing Pagans – this is Austin, after all, where such folk are almost as thick as bass players – and we're passing along the responses to you.

Rowan Badger, a Pagan for almost two decades, currently serves as a priestess among members of her community, performing weddings, handfastings, blessings, and other ceremonies and rituals. She's also the Assistant Manager of Safety Services and a Chief Guardian for the Council of the Magickal Arts, providing general assistance with safety and community well-being at festivals.

"The Summer Solstice is a harvest festival," Badger tells us, "and it's the first of several harvest festivals. It's the one that goes with things like fruit and the tender, fresh vegetables. The sweet, more delicate things – not the grains or the butchering that comes later, those things that see you through winter. Midsummer is much more about enjoying sweetness and celebration, so something that might happen, we might get together and have a big party with all of our friends and everybody brings wine or mead or tarts or pie or other delicious things."

Austin Chronicle: OK, but that's the sort of thing any group of people might do. Are there other, more definitely, ah, Pagan-y things, too?

Rowan Badger: There are groups who do a ritual burning – I've attended several of those, and they're really incredible. You take everything that you want to have abundant for the year, or you take things that you want to get rid off – it sort of depends on your view of the holiday. And you put those things into a container – some groups use a large effigy of an actual person, some groups use a wicker cage – and you put it into the pile, and you light the damn thing on fire, and you dance and have fun.

RB: That is one of the historic elements – but it's not a part that I particularly celebrate, because there's an overtone of unwilling sacrifice there that I'm uncomfortable with. I'm only in favor of willing sacrifices. I'm much more of a community witch, I don't do as much of the history, so one of the things that I'll do is I'll invoke fey or faery energy, to ask the blessing of the fey over the coming year. But that's something not a lot of people are comfortable with, or comfortable with having done around them.

Sean Meeks, who's been Chieftain of the Pagan Student Alliance Austin for the last two years, has been immersed in the community for eight years, attending (and, in some cases, helping coordinate) the Council of Magickal Arts' Beltane and Samhain festivals, the Full Moon and Dark Moon rituals hosted at the Trinity Methodist Church, and various open rituals for holidays hosted by other groups.

"How do I celebrate the Summer Solstice?" says Meeks. "The solstice is in the middle of the growing season, and I like to do many summery things that indecently celebrate being alive. I normally try to go swimming, eat ice cream, hang out with friends, and just the fun things to do in the summer. Towards the evening, I make a round to the places the Neighbors frequent, and leave offerings of milk, bread, and honey. At night, I try to hold a ritual, sometimes alone, sometimes in a group, that celebrates the height of the sun's power, yet still reminds me that time turns. The Summer Solstice is the longest day of the year, and the apex of the sun's power, but it also signals the start of shorter days. So the sun's ascension is only momentary."

Austin Chronicle: What you've told me should probably be self-evident, but my ignorance is wanting a fuller description. Like, um, when you say "Neighbors" … do you mean just those people who live around you? And "places frequented"? Like, parks? Bars? And when you leave offerings, what's that look like?

Sean Meeks: "The Neighbors" is a politer name for those entities most people call faeries. Faeries actually means strangers or outsiders, and the Neighbors are as native to this world as we are – they just inhabit different places. Places they frequent are places that seem to have a life of their own. It can be a old oak tree, a particular building, a road where you get lost a lot, et cetera. My offerings are usually a piece of bread soaked in honey and milk or fruits like grapes or strawberries.