The Q&A Hole: What the Hell Is Wrong with People These Days? 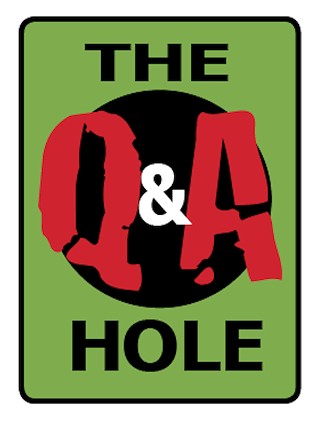 This time it's personal.

I mean: I was feeling especially disgruntled (to put it mildly) with humanity a couple weeks ago, yeah, so I started putting this question to various people I met.

Pity that 1) I don't have constant access to Grumpy Cat, and 2) the varmint can't actually talk, of course; because that creature would certainly have an appropriately acerbic thing or two to say about this subject … but, anyway, here's a few Austinites responding to the question

What the hell is wrong with people these days?

Tim Doyle of Nakatomi, Inc: In general? Wow, that is too broad. There's so many topics, where do you start? Uhhhh, what's wrong with people nowadays? Um, narcissism. Lack of empathy. Lack of motivation. I could go on for hours. We'd have to whittle it down, this is like a behemoth of a shape in front of me that I have to describe. It's almost too crushing of a question! [laughs]

Jon Cozart of PAINT: Aaaaah, I’m not a politician, I’m not trained to speak in this way! I guess, ah, people lack work ethic today. There’s a lot of consuming and not a lot of creating.

Ben Snyder of The Show!: That ban on the bags. That really bothers me. When that happened, that’s totally what came into my head: “What’s wrong with people these days?" I just wanna get stuff, put it in my bag, and go home! I get why they did it, it’s just – I don’t think it’s gonna help in the big picture, it’s just a message they’re sending. But why do they have to make me send the message?

Richard Whittaker of the Austin Chronicle: Far too much to get started on. Mostly apathy, but then also this combination of smugness when they do anything at all – and a belief that just doing something makes it good and they should automatically get applauded for it. I do support the idea of saying, "Ah, well done, you tried." But, then again, just applauding for trying, that doesn't mean they don't suck at whatever it is. People need to be doing something they're good at as well: That's how you move the world forward.

Brandon Zuern of Austin Books & Comics: I wish I knew. It seems like people have their worldview and that's it, there's no other opinions, there's nothing else that can be said, it's What You Think. We don't really want to listen to each other anymore – and that's a really weird thing. People just don't listen enough. They want to be heard, or they're happy to quietly not pay attention, but no one really wants to listen. So, listen up, folks!

David Jewell, Poet: I would just have to say, too much information to sort out short-circuits their sense of being. And, ah, they're all hypnotized and they all have amnesia. They're a culture of amnesia.

Madeline Malka, Actor & Improviser: I prefer to ask, What is right with people these days?