Chinese New Year in Austin: A Sort of Parallax View

Leng Wong and Cindy Soo tell it like it is 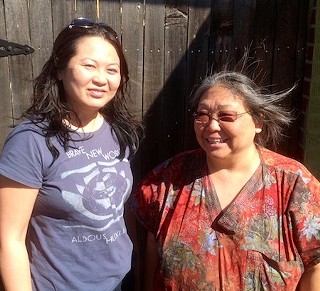 The morning beyond the window's pane was as bright as a neon chrysanthemum.

So there I was, inside, slurping coffee, staring at my computer's screen, eyeing a press-release email for the Year-of-the-Snake New Year's Celebration at Austin's Chinatown Center.

"Oh hey," thought I, "it'd be kind of cool to go and check that out for a few hours, come back with a rambling report on the experience, kind of like what I did with Art Outside, a wannabe version of the sort of thing that reached the apotheosis of its form with David Foster Wallace's 'A Supposedly Fun Thing I'll Never Do Again.'"

But by the time I finished my coffee, I had a big fat second thought: Yeah, that's just what the world needs – another white guy's take on someone else's ethnic traditions.

So, it occurred to me, why don't I see if Leng Wong's going to attend the festivities? I'd recently interviewed her about Lucky Chaos Theater and their production of Asian Mom/Jewish Mom; and she's Asian; surely her take on all the Chinese New Year hubbub would be legit and interesting?

So I asked her; and – thank you, Leng! – she agreed to attend and then be interviewed about the experience.

And I figured I'd mention this to Cindy Soo, the Chronicle's credit manager – also, note the surname, of Asian ancestry – and maybe I'd score a couple of points for having had a non-stupid idea?

Should've known: Cindy was like, "Well, I should have a part of this, too!"

Thus, this: A view from two different generations of Asian-Americans – C. Soo's a baby-boomer; L. Wong's a bit younger than that – on what Chinatown Center's event was like this past Saturday. And on various other relevant things.

[Note: The transcript that follows is mostly as it occurred, but slightly truncated so's not to be all tl;dr with even the insights and interesting details provided by these two, ah, amber-hued ladies of Austin.]

Wayne Alan Brenner: So, yesterday at Chinatown Center, what was that like?

Cindy Soo: Ninety percent of the people were Anglo … well, maybe not ninety, I'm guessing it was –

Soo: I would say seventy.

Soo: Yeah, there were a couple of white kids dressed up in the red and gold pajamas. There was one kid that had the hat with the pigtail.

Wong: I think events like this are always fun for the kids. Besides the mainstage area with the performances, there was another area where it was pretty much like –

Soo: The same kind of thing you see anywhere else –

Soo: Yeah, with a climbing wall, and –

Soo: Yeah, and a riding bull.

Soo: I was like, where does the bull come from? That's like Gilley's in Houston, that's not Chinese New Year.

Wong: Yeah, they make it so the event's really more for kids and for families with young kids.

Soo: And the typical City Of Austin stuff was there, the sustainable housing, and the Asian Community Center.

Wong: The booths were there, yeah.

Soo: There was a firetruck. And the mayor was there. He was the only City Council-type person there that I saw – the police chief didn't show up. But we were there quite early.

Brenner: And what made this event Chinese-New-Year specific?

Wong: Yeah, lots of firecrackers – which was good.

Wong: She's like, "Firecrackers that way, I'm going this way!"

Soo: Well, it's like when you're a little kid: It's noisy, and they smell. And, actually, they wrap the firecrackers now like ribbons. I was looking for little, like –

Wong: Like little dynamites, little mini-dynamites, in the old days.

Soo: Yeah, so the firecrackers, and – what else?

Wong: The Lion Dancers were there. I like the fact that they went to different stores, because that's very traditional, for businesses to have the Lion Dancers come in.

Soo: Yeah, they had little areas cordoned off, and after the Lion Dancers did their mainstage dance, the Lion went all through the neighborhood. I don't know what the second half of the day was like, because at noon, the Texas Dragon people didn't come on.

Wong: Yeah, we didn't know who was coming on at what time. There wasn't really a program –

Soo: It was whatever was on their advertisement that was posted on the wall.

Wong: And I had to look at the shirts to see who I recognized, because I've been to so many of these over the years, I know most of the people –

Wong: I pretty much have to say hi to half of the people there, because I know them personally. But it's good, I think, to have things like this once a year.

Wong: It's like there's a Lunar New Year party circuit for these two weekends. The Chinatown Center, the different individual big businesses – like the supermarkets and whatever – you have all these little things, and all of us are like, "Oh, hi! I haven't seen you for a year!" Which is very Chinese New Year. We usually go visit family once a year, so this feels sort of like that.

Soo: It's modern Chinese New Year. Because, when I grew up, it was in Houston, and it was a big deal at the Chinese Merchants Association – and that building looks typical of what they are in San Francisco. I don't even know how they do it in Houston anymore, because it's all suburban, the Chinatown there now is in a suburban part of Southwest Houston. And the problem with the staging here in Austin, the way they had the stage, it was hard to see anything if you were far back. And there was only maybe three or four hundred people there? In the afternoon it might've been better.

Brenner: What time did y'all get there?

Wong: Yeah, it was like, "There's so many cars, where are the people?" But I think that's because it's a big area, even two or three hundred people didn't feel like a lot of people. But there were cars everywhere, like, "Where are all the people? Are they having a secret party somewhere that I don't know about?" And I remember telling Cindy yesterday, most of the Asians are not here because they have their own individual sub-community celebrations, and that's where you'd find them. For example, last Sunday, before rehearsal for my show, I rushed to the temple on 360 – because that's usually where I spend my Chinese New Year, with the Lion Dance and the dancers and the whole thing.

Soo: Is that mostly Taiwanese?

Wong: It's Taiwanese Mandarin-speaking, but I would say, um, half of them? So half of them are originally from various parts of East Asia, I guess. And, again, that's an example – like the Vietnamese community would have their own thing that's pretty much all the Vietnamese people.

Soo: And UT – the Student Association.

Wong: Yeah, UT will have their own thing. So that's why it becomes a party circuit. Like me, I'm a little bit everywhere? It's like Christmas all over again, having to navigate the parties – okay, I'm going to this and then this and this. And I'm eating and I'm eating and eating, and I'm watching my dream guy do his Dragon Dance thing, so, yeah. And I forgot to host my own party this year, because I was so busy!

Soo: The Chinatown celebration, they didn't hang as much cabbage. They weren't into the money. It's kind of surprising, as America is so into money, but this thing didn't focus that much on money. They were warding off the bad spirits – because that's what the firecrackers do, they scare away the bad spirits for the coming year.

Brenner: Now, what's this about money? And a … cabbage? How does that work?

Soo: In traditional Chinese New Year, they hang cabbages. When I was a kid, it was cabbages. You hang them down from the ceiling or wherever.

Wong: Somewhere really high up, where it's hard to get to.

Soo: And the Dragon has to snatch it.

Wong: The whole point is to create a situation where the Dragon has to do all this acrobatic thing, which creates a good show for the audience. So usually you have the Dragon Dancers standing on top of one another on their thing to go really high, because – in the old days you weren't allowed to use any kind of ladder or help.

Soo: It was all acrobatic.

Wong: It was all acrobatic! And then they get the food – usually it's cabbage – which has the red packet, which has the money that's the payment for your services. So if you don't get the cabbage, you don't get the money. So you actually have to work for it, and it creates this show for everybody. I used to do this when I was little, and for the Dragon or Lion Dancers, it's an adrenaline high, "We're gonna get it, we're gonna get it!" Because sometimes there's two Lions, and they have to see who gets it first.

Soo: And oranges is another traditional thing. You're supposed to give out oranges.

Soo: So there wasn't that much food, but there were red envelopes in the trees – and that's a thing that elders do for kids. Because my aunt said, "Well, once you get married, you don't get it."

Wong: You know why that's the case?

Soo: Because – the family?

Wong: No, because you're only allowed to give red envelopes when you're an adult. And you're an adult when you get married. So, for example, if you were 40 years old or whatever – my uncle was 40-something years old and he wasn't married, so he was still considered a child. And a 22-year-old who gets married is considered an adult. But, in modern times? I'd rather get money than give money.

Brenner: Had y'all been to Chinatown Center before?

Wong: I go there way too much.

Soo: I'd gone to a couple of them, but, being that most of the vendors are Vietnamese, it's slightly different – we're Cantonese.

Wong: We found out that we might be distant cousins.

Soo: Yeah, we could be distant cousins.

Wong: That's one of the things that happened throughout the whole day –

Soo: Six degrees of separation. And Leng might be able to help me find my dad's family in Malaysia, so that's kind of nice.