That Dirt Candy Feast Made the Alamo's Mouth Water

Now Austin reels in the implications of a perfect portobello mousse 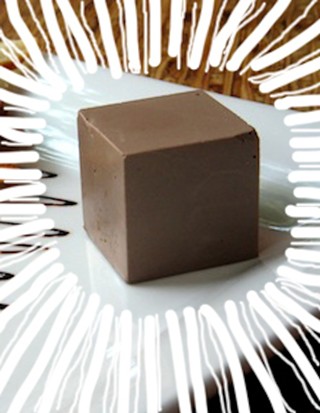 It's all about relationships.

But, well, let's not be gettin' ahead of ourselves here.

2. The Dionysium's Ellie Hanlon has known New York-based writer Grady Hendrix since high school; and Hendrix runs the New York Asian Film Festival, so he's been long conversant with the film savants of the Alamo Drafthouse; and Hendrix is also married to Dirt Candy owner and chef Amanda Cohen; also, Hanlon introduces these two and their vegetarian mecca to maestro Graham Reynolds, who is deep in various cahoots with the Alamo empire, and –

You begin to see why the title The Perfect Storm was so swiftly adopted into popular lingo.

And, speaking of storms …

By the Friday before last weekend's Dirt Candy Feast at the Alamo, Cohen's NYC eatery had been plunged into rain-drenched darkness and was filled with little but rotting vegetables and woe. Still, Cohen and Hendrix did whatever was necessary to make it to Austin and present their heralded Feast while Stephen Chow's hilarious God of Cookery played on one of the South Lamar venue's big screens.

"We came down here and we pretty much just slept and had showers," says Cohen. "Because it wasn't just our restaurant that was affected by the hurricane, but our house as well. We live on the 23rd floor, and we were in the no-power zone. So we not only didn't have power, but we didn't have any water, and we had to walk up 23 flights of stairs – which was very good for, you know, exercise, but by the end you're like, 'I … can't do this … many more times.'"

4. The relationships between a chef and the members of a kitchen crew are like the relationships of a military squad in a pitched battle: Fellow combatants working together to overcome a common foe, everyone doing their damnedest under shifting conditions, everyone hell-bent for leather (or maybe fruit leather) to accomplish the arduous task at hand. And this is true even when strangers come together to fight the good culinary fight.

"Trish [Eichelberger] was amazing," says Cohen of her Alamo cooking experience, "and John [Bullington], who's the chef here, he was great; the whole kitchen crew, Jason, Randy, and, ah – if I'm forgetting anybody's name, I – I feel like this is my Oscars speech. There's something pretty amazing, I was telling this to someone earlier: We all work in this profession, but we work in very different environments, very different kitchens, but we all have this common language. You can go into somebody else's kitchen – and you've been working in kitchens for twenty years – but you go in and you're like, 'I don't know, it's my first day, I don't know where anything is!' But eventually, the kitchen language comes back to you and you feel comfortable, and you notice that you're communicating with these people who you met only 20 minutes ago – but you know what to say and they know what to do. And the Alamo kitchen, it was great to see how professional they were."

5. What you ingest has a relationship with what tastes good to you. You're more likely to trust a statement like that because, see above, you've had a prior relationship with it. What I've always trusted, due to my prior relationship with it, is the flavor of portobello mushrooms, those sirloin-thick fungi of such deep umami-rich taste that they can render meat, even for a carnivore, redundant. And it's this part – the Portobello Mousse – of the entire Dirt Candy Feast's array of vegetable noms that has stayed with me, haunting my tastebuds, singing a song of deliciousness so seductive that … people, it's difficult to type, just thinking about it.

The mousse arrived as a dun-colored cube on a plate containing crostini and a generous dollop of pear-and-fennel compote; this was the second dish of the evening, preceded by an appetizer of Jalapeño Hush Puppies and Maple Butter. And, yes, the hush puppies were a piquant and puffy delight, and the maple butter was like something churned from the milk of Odin's special ambrosia cows up in Asgard; but that mousse drove the recent memory of them from my tongue. And, yes, the next dish was Smoked Cauliflower and Waffles, and the perfectly prepared cauliflower was like the best cauliflower you've ever had, doubled, and accompanied by contrasting bits of pickled cauliflower; but that mousse, oh, the sensation of it still held my ecstatic palate in thrall. And then dessert, yes, Dirt Candy's famous Popcorn Pudding, which was hella fine and soooo soft & creamy that you'd want to roll around in a large tub of it with your favorite tantric partner; but, no, that mousse, that fucking portobello mousse yet held sway over every flavor-processing neuron in my brain.

It was the sensory equivalent of doing a Vulcan mind-meld on a portobello mushroom that's having, somehow, an orgasm.

After the feast I tried, with the fervor of a new acolyte, to describe this experience to Graham Reynolds.

"Well, you always know where you can get more," replied Reynolds, smiling cruelly. "You get up to New York a lot?"

I don't, dear reader.
Truth be told, I hate leaving Austin at all.
But now I've got this monkey on my back, clawing at me, demanding MORE! PORTOBELLO! MOUSSE!

See, the Alamo's Dirt Candy Feast included a presentation of the Dirt Candy Cookbook, a cookbook that's also a graphic novel, and – listen, please – the recipe for that mousse is right in there, on page 118. I can potentially – wielding my own dozen-years-in-foodservice-skills – learn to make it myself!

And so could you.

And if that alone isn't enough to make you want a copy of the book, see this review …
and let me know when supper's ready, okay?

Until then, just leave me to my (say it! say it!) moussey fate.