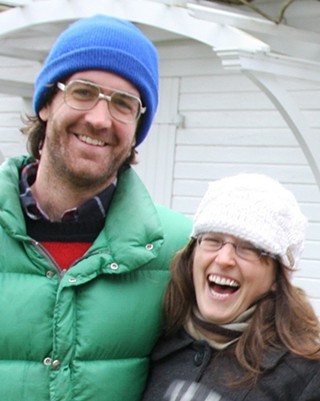 Graves and Kenah, fire to come.

These guys are never just fooling around.

This company is why, if you spout a generality like "Oh, theatre totally sucks," you're an idiot. That's because, due to stageworks like the ones Physical Plant creates, the ten percent of theatre that doesn't, totally, suck … happens to include five percent that is, totally, brilliant.

(We love you, Ted Sturgeon.)

The last time Physical Plant Theatre produced a show written by Steve Moore and directed by Carlos Treviño, it brought us Not Clown, a bizarre world in which clowns are tortured and circuses banned and a renegade troupe enacts the story of a girl who longs for their outlawed life – even as the girl's father commits atrocities on the State's behalf.

Clown torture? Yeah, Jesus, people lucky enough to catch Not Clown in 2004 are still talking about that funny-and-unsettling-thing-perfectly-performed.

The big Physical Plant show from Moore and Treviño before that one was The Kindermann Depiction, and we're not even going to try to describe it in this blogpost. See our 2002 review here, or suffice to understand that few who saw it, who experienced it, have witnessed anything comparable to its strangeness, its weird poignancy, its compelling and indelible narrative. Even now, the brain works to keep the heart from trembling.

And Physical Plant, a company that started way back in 1994,
has been on hiatus for a while – especially the Moore/Treviño team of it.
But now, as they say in the movies, they're back.
And this time, as they further say, it's personal.

The play is called Agnes & Alfred, and there's no weird setting or alternate world to it. There's no oddly costumed legion of performers, no greasepaint, no puppets. There's no wracked inventory of outlandish props, and the set design is mundane.

What there is, is three actors: Thomas Graves, Hannah Kenah, and Katie Van Winkle – with Graves' and Kenah's characters as the focus of attention while their lovely, painful, anxious, funny, malicious, and complexly all-too-human relationship plays out over seventeen years. It's a romantic tragedy with, as the playwright says, "the internal premise that intimacy destroys love."

Steve Moore: This project terrifies me. I don't know why I feel so, uh ...

Moore: I guess there's a lot of my own life in there, because I wanted it to be as emotionally true as I could make it? There's plenty of it that's not at all autobiographical, but it all relates to something that – it'll pique curiosity, "Why did you put that … ?"

Brenner: Why did you choose these two actors?

Treviño: Did we even think of anyone else for these roles?

Moore: I don't think so.

Treviño: Did they even come before the story?

Moore: I was working on that other version of it, a kind of Choose Your Own Adventure story that just got boiled and boiled down. But they always seemed like the right people. They're amazing.

Treviño: They really are.

Moore: They're willing to go to the very heart of it.

Treviño: We've had a couple of workshops with them over the past two years, and I wasn't sure – I knew they were both great performers, but I didn't know how they were as actors. I've seen Hannah's work a lot less, but for Thomas, especially – he's a really gifted physical performer. But I'd never actually seen him play a realistic and emotionally connected character before? And so the thrill of watching him do this new thing really well was fun.

Moore: Besides being great performers, they're both really smart theatre people, too. It's great just to have them in the room when you're banging away at a scene, trying to figure out what doesn't work and why.

Brenner: Why live theatre in the first place? Aren't there already enough stories and spectacles – some shitty, some brilliant, tons of it mediocre – on television and in movies? Especially now, with pretty much everything available online?

Treviño: It's the actual sharing of time and space. I mean, the Internet brings us together across the world, but to actually share time and space like that, it's not something we do much as a society. Except for church, some people still go to church. For those of us who don't, this is the closest thing.

Moore: I think that there's still the danger of things running off the rails. There's a sort of NASCAR aspect to live theatre. Nobody gets to arrange it so precisely in advance, to lock it down, so you can expect it to go the same every time.

Moore: I think so. Or variations on fucking-up. Or maybe they'll get it exactly right. I had a conversation with Joey Hood, who I think is one of the best actors in town. And he was talking about his experience performing Exit, Pursued By a Bear. The show opens with him, the protagonist, facing away from the audience, duct-taped into a recliner. And the lights are still on as the audience is entering, and Joey's sitting there, and I asked Sonnet Blanton, "What do you think Joey's thinking about right now?" And we asked him, later. And he was meditating his way to being able to hit every mark in the whole show. And when the action began, he did – he hit every … fucking … mark.

Brenner: And of course writers and directors, they have their own marks to hit.

Moore: One of the things that's fun about this show, is we're having to negotiate "What is that person going to see that's different from what this person is going to see?" If I'm sitting in this place, I'm going to understand this scene much more from Agnes's perspective – because she's the face I get to see most of the time – than I would from Alfred's perspective. So we're having to play with these balances, because we're doing it in-the-round. So you might hear something that somebody else doesn't hear, or see a gesture –

Treviño: Hopefully that's not the case – preferably not.

Moore: Or, well, you'd hear things at different volume, even if you can still hear them.

Treviño: And you get cues from the other people in the audience, too.

Moore: We're relying on that. If I can't see Alfred's face, for instance, because I'm behind him, I'm relying on Agnes' reaction, or the person behind her, who can see Alfred's face. If that person breaks into a laugh about something, I'm going to understand something about what happened. So having theatre reflected back to you, because you're an audience member –

Moore: I do feel, sometimes, that theatre is like a stepchild of film or of TV, these days. And I want to find a way to justify it – because I love going to see it and I love making it. So we come up with something like this. Or like Adam Sultan …

Brenner: You – Steve, Carlos, Physical Plant, the Rudes, a couple other companies around town – do work that makes use of the live setting and the audience's presence, of the possibilities of all of that, of the possibilities of theatre, in ways that work the best as live performance – as opposed to settling for doing a play because you can't afford to make a movie. A lot of companies in town – in every town, I imagine – do settle for that. And they keep re-heating the same old chestnuts, doing plays that you can usually see a better cinematic version of on Netflix, and it's … it's fucking boring, isn't it?

Moore: I think every play should be a balance between orientation and disorientation. I'm going to alternate moments when you feel comfortable with moments when you don't feel comfortable and don't know what's happening. And that balance is different for different shows. Like, going to a Rubber Rep show, for some people it's way too much disorientation. And maybe for the kind of shows you mentioned, maybe it's just more about orientation – which some people, even people we know and respect, prefer.

Treviño: I guess there's a certain market for that. Theatre companies exist that produce plays like that, and there's an audience for it. And if those companies didn't exist, I doubt that any of those theatergoers would be going to see these other plays, anyway – the kind of plays I prefer, the kind that Physical Plant produces. 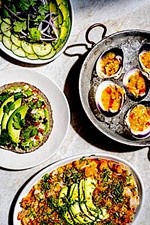