Okay, Everybody– Back Into the Pool! 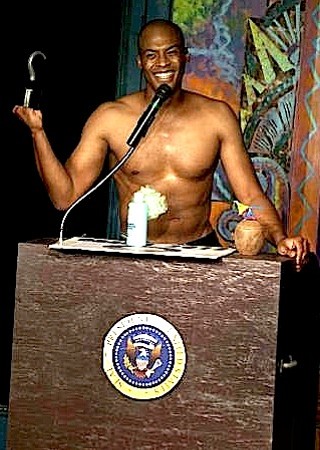 Don't look at Romney. Look at him.

We're not talking about cerebral comedy along the lines of David Foster Wallace's Infinite Jest, but we are invoking DFW's "This Is Water" speech in this blogpost. Because, if you're a fish, you're used to water and it doesn't occur to you that there is water, because it's not even noticeable. Because, as the Madge who isn't AKA Madonna Ciccone used to say about a less potable fluid: You're soaking in it.

And we're specifically invoking DFW because, well, because we're rather a crew of Wallaceites up in here – but also because there are plenty of fish in Esther's Pool. Of course, the venue that Esther's Follies has operated out of for 35 years now is inspired by the pools used by Esther Williams in all those synchronized-swimming fantasias from days of cinema gone by, where any cetacean would've been swiftly killed by the chlorine solution. But, you know, if the Esther's people are going to warp their own metaphor by including a stunningly gorgeous mural of natural marine life on their west wall, we're damn sure going to say "fish" and employ a spear gun to fight off any naysayers.

Esther's Follies is just there, is what we're getting at. You know? It's like they've always been in that same spot, always been plying their topical sketch-comedy trade, always been trucking in musical numbers and the character-spiced illusions of magician Ray Anderson, always involving the passers-by on Sixth Street via their enormous stage-backing picture windows. We're so accustomed to the troupe's presence; and we figure that they're always gonna be there; and we know Esther's Pool is where the tourists go, and where the well-meaning college kids take their visiting folks when they want to show them some, ah, Austintatious entertainment.

What we forget – especially these days, with sketch groups popping up like so many humor-fomenting Whac-a-Moles on the scene – is that the writers and performers at Esther's Follies are often just as fucking funny as the putative edge-pushers. And, let's be very certain about this, they're polished. They're professional. Which is a bad thing, it seems, if you're some kind of asshat hipster who equates poor production values with Keepin' It Real or whatever, or who has to ditch a band once that band's signed to a bigger label, yadda yadda, you know the routine. But what this polish and professionalism result in, at least in the case of the Follies, is this: Never a dull moment. In fact, seldom other than an enjoyable moment. And, often throughout the hour-and-a-half show, moments of solid laughter and amazement.

We caught "Triple Digit Double Dog Dare Ya," the current Esther's show, last Thursday. And it is the current Esther's show, because these guys change the show constantly, keeping up with the political and cultural trends of the day, shifting skits in and out as they prove successful or not, and so now they're concerned with lampooning the gamut of Obama/Romney electioneering shenanigans. And some of the bits don't quite succeed; and most of them are, okay, pretty funny; and a few of them are as wonderful as the more inspired bits of a Master Pancake or Latino Comedy Project or Stag Comedy show. Which is to say: Wow. And always – and here's the meat of the matter, the fluoride enhancement of this water – the skits are presented one after the other, bam-bam-bam, so swiftly and smoothly interlocked and overlapping, so filled with costume changes and dancey bits and musical enhancements, that if you're not actually laughing, you're sitting there thinking "Shit, these people are working it, these people have got it down."

And, you know what? We haven't even mentioned Ray Anderson's parts of the show.

And, you know what? Only a fool wouldn't mention Ray Anderson's parts of the show.

Anderson's picture, we haven't checked but we're willing to bet, is on the Wikipedia page defining "consummate performer." The illusions he serves up – with flashy disappearances and levitations and penetrations and pools full of water and live dogs and always a lovely assistant (although "lovely" may not be the first word that springs to mind when the assistant is a scantily-clad Matt Hislope camping it up beyond thunderdome as the aggressively gay Tomas) – the illusions, as stunning as they are, are almost an excuse for Anderson to flash his winning smile, to mess with the audience as a pop-and-locking robot or as The Amazing (and outrageously boner'd) Frank.

"Ray's at least forty percent of the show by this point," says Hislope, who we recently interviewed about Esther's and other things. "Maybe even more." (The Chronicle's Robert Faires profiled the magician right here a few years ago.)

And so they mix all of that magic together with the sketches and songs, and they hone it and continually re-tailor it to what's going on in local and national news, and they adjust it to what seems to work best with audiences, and they add lights and glitter and music, and – well, there it is: The contents of Esther's Pool, the Follies, the show you shouldn't overlook just because it's always there: The comedy spectacle your brain would be happier if it were directly soaking in every now and again. 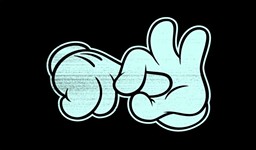 Comedy, Esther's Follies, Shannon Sedwick, David Foster Wallace, This Is Water, invoking whatever the hell resonances we feel like