All the Literature That's Fit to Draw & Paint?

The latest volume of 'The Graphic Canon' galumphs on in 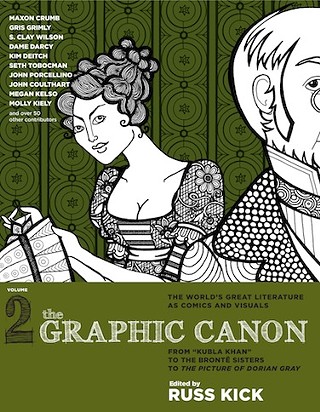 I'm not gonna do it.

I'm not gonna preview this second volume of The Graphic Canon, from the fierce offices of Seven Stories Press, that just arrived on my Chronicle desk.

The thick volume won't be officially released until October, you'd have to pre-order a copy, so I'm not going to mention it.

Aside from saying that Russ Kick, the man who's curating this tripartite series, must be some saint of artist-wrangling abilities, some theme-embodying savant, and if he's ever in the ATX I'll take him to dinner at Elizabeth Street Cafe to honor the ridiculous amount of work this project must have taken him to accomplish.

Aside from saying that just Dame Darcy's 16 pages of excerpts
from Alice in Wonderland in this book might be worth the price of ownership all by itself.

Aside from mentioning that John Porcellino gives Thoreau's Walden a sweet minimalist treatment that fits it perfectly.

Aside from noting that S. Clay Wilson and Shawn Cheng's
separate takes on the Brothers Grimm add new visual delights to the old tales.

And, ah, there's David Lasky and Elizabeth Watasin
and Molly Kiely and John Pierard and – no! No!

NO MORE, I SAY!
I WILL NOT PREVIEW THIS SECOND VOLUME!
YOU'RE SO INTERESTED, GO SEE THE PUBLISHER'S WEBSITE,
FOR THERE IS A FINAL PORTION YET TO COME & I SHALL SAVE MY ENERGIES FOR IT!

In the meantime, dear reader, here's a brief consideration of the first volume.