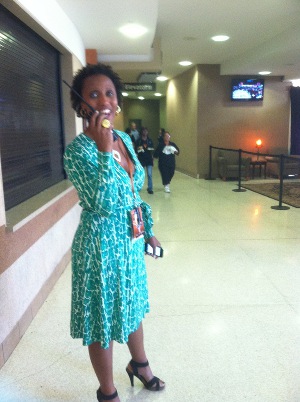 A laminate and a walkie-talkie can get you into anything – maybe even heaven.

In other words, I could easily have shot a rubber band or thrown a paper airplane at Rachel's head but fortunately thought better of it because as I got to know her better, I found out she has a pretty devastating right cross. Let's just say that early on in our friendship we had to work out some boundary issues regarding innuendo and the creative use of casual profanity.

What a fortunate circumstance it was, however, to have scored adjoining real estate to Rachel who, along with having an perpetually sunny disposition, was also a fan of jock jams in an office where morose, rhythmless, shoe gazer alternative music held unquestionable sway. When she popped a Jock Jams CD into her desktop boom box with absolutely no remorse, I knew we were going to hit it off.

Over the next couple of decades, Rachel and I did become great friends. It wasn't that difficult. Rachel is an enthusiastic lover of life who manages to attract friends wherever she goes. She has a perpetually sunny disposition and a disturbingly in-depth knowledge of pop culture, sports, literature and music. She also parties like a rock star. Note that I normally would have said "porn star" were it not for that right cross. Rachel is also a celebrity magnet. She has hung out with lots of exciting sport stars and entertainers - people like Robert Plant and Billy Gibbons. In fact, somewhere in my files is a picture of Rachel and me with Bushwick Bill. I know, I know ... now I'm just braggin', but I'm pretty sure Rachel is a bigger celebrity than all of them.

LuvDoc: You're from Angleton. Explain that.

Rachel:  I am NOT from Angleton!  I'm from Houston, H-town, Space City.

LuvDoc: What? I have been telling everyone I have a friend from Angleton. This is going to be awkward. Space City...that's rich.

Rachel:  You know no one from Angleton.  It was graced with my presence for the last 3 1/2 years of high school, but that's it. OK, fine, my parents still live there... 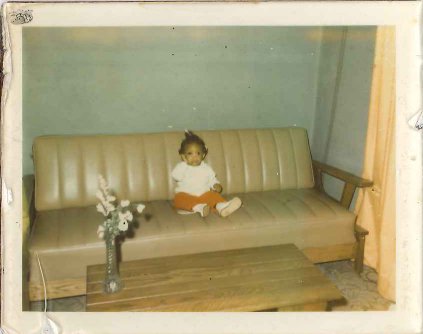 OK, Rachel’s probably right. That couch is way too modern for Angleton.

LuvDoc: If you tell me you're originally from River Oaks this interview is over.

Jeff Bezos went to River Oaks Elementary, too - but a few years before me. We're both members of the alumni association, which cracks me up.

LuvDoc: Jeff Bezos? Does he play for the Mariners? River Oaks Elementary Alumni Association? I've heard that River Oaks is the only part of Houston that is actually air-conditioned. I mean the OUTDOORS.

Rachel:  That is actually factually true.

LuvDoc: All of it? Because I may be off base on the Mariners thing ... off base...I am cracking myself up!

Rachel:  What does it say about me that I just snorted at that?  This is sad.

LuvDoc: Snorting makes you charming - So sayeth Tony Montana...and really just about any cocaine abuser. Speaking of, how was that Imperial Sugar tour? That seems to me to be the nexus of all evil.

Rachel:  That was probably the start of my sugar fixation - a spoonful of sugar at the end of the tour. My parents weren't that thrilled when I got home bouncing off the walls looking for a fix.

LuvDoc: Plus, it has Imperial right in the name. That's like saying "we're going to steal your country and fuck all your women." Usually in an English accent, but sometimes Castilian Spanish.

Rachel:  I think everything sounds better in Castilian Spanish - or at least with that accent.  Ricardo Montalban taught me that. Remember when kids had to sell candy for band trips?  I ate all of mine in about two days.  Good times.

LuvDoc: I'm not a chump. I know that River Oaks kids never had to sell candy to go anywhere.

Rachel:  Huh.  Good point.  Why was I selling that candy?

LuvDoc: So anyway, you grew up in a posh Houston neighborhood and then..

Rachel:  Oh, no, I was bussed to River Oaks to a program for the "academically able" student.  That's the best phrase ever.  It doesn't seem to really mean anything, does it?

LuvDoc: That is pretty sweet. I was bussed too! We're like twins! Actually, I was cabbed. It was a volunteer program. There weren't a lot of takers.

Rachel:  My first elementary school was St. Stephens Episcopal - with uniforms!  Then Grissom Elementary (named after Gus Grissom, astronaut). Wait, you didn't ride a horse to school?  I really did just sort of assume that.

LuvDoc: That's a smart assumption. Stick with that.  St. Stephen's Episcopal ... so at least you're familiar with fetish wear.

Rachel:  I'm not going to try to figure out what synapses were firing with that segue, but...yeah!  I'm in the rock business!  It's my job to stay aware!

LuvDoc: I'll say. We're getting a little bogged down. We need to get out of Houston. Could you synopsize your pre-teens through early twenties without lamenting your awkward teen years too much? It wouldn't kill you to give Angleton a little slap and tickle as well.

LuvDoc: Wow. If brevity is the soul of wit you are Don Rickles. I don't know why that name popped into my head.

Rachel:  Well, Angleton kind of blew me away with the number of people who were happy to stay there.  I mean, I'd already seen Gay Paree, so... 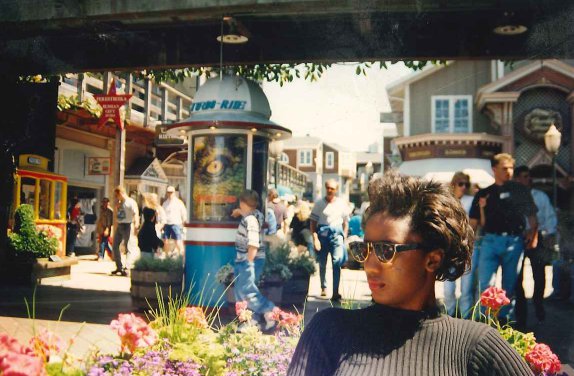 Are you kidding me? That doesn’t look gay at all … well, except for the flowers and the sunshine.

LuvDoc: Really...was that on a River Oaks Elementary field trip?

Rachel:  Honestly, I had good parents (if overly protective), decent schools, food on the table, clothes on my back - what angst was there, really? River Oaks Elementary was very progressive for its time!  We had a Mac IIc in 5th grade!  4th grade we had a Radio Shack TRS80. That's why I'm a member of the ROAA!  Nothing wrong with elementary school. 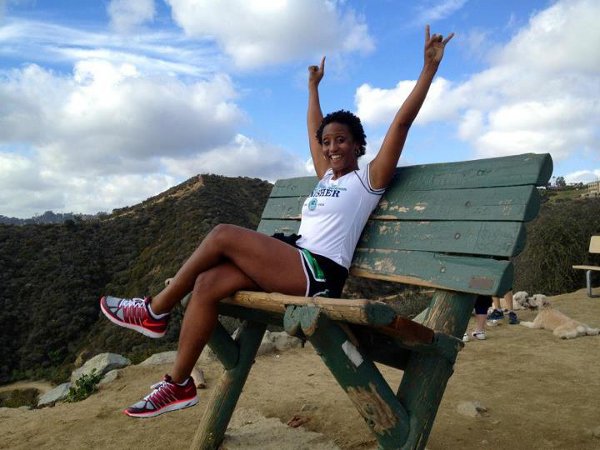 This is a picture of Rachel on a River Oaks Elementary field trip to the Swiss Alps. Their shoes were even progressive.

Rachel:  so, anyhoo, Austin for UT, stayed undeclared until senior year, then the paycheck I was drawing from MADD seemed better than ramen, so I went with that. I'll just let you take that in.

LuvDoc: Point. There is an extra bone in my sarcasm gland that really, really wants to make fun of MADD, but those are some heavy people. They don't fuck around.

What did you do for them? Well, besides roughing up idiots like me of course...

Rachel:  Office assistant/receptionist - phones, filing... At one point I actually went out and gave talks at chapters and also went to several counties and went through their DWI arrest records.  Pretty sobering (and really, I didn't intend that pun) to see how many people had been arrested over and over without jail time.  Those days are over.

LuvDoc: Plus you were making MADD money! Sorry...that little bee just slipped out.

Rachel:  Thank you for that.  It was starting to get heavy up in here.

LuvDoc: So how did you end up at the Erwin Center/SXSW? You can reverse that phrase as well. I know you worked at both concurrently for a while.

Rachel:  Oh, yeah!  So, I got back to UT for my junior year and then took the Erwin Center as a part time job.  The late eighties had tons of touring shows, so it was very easy and fun to be here.  They've all been lost to a haze of memory though - do I need to go look them up?

Rachel:  Holy crap.  I did see a lot those bands.  Okay, wait, were you at INXS/GnR at Cowboys Stadium? CmB!

LuvDoc: No ... I wasn't at INXS/GNR, although I admire how both those bands party. See? You have me feeling guilty with that MADD thing.

Rachel:  You do? My work here is done. So around 1990 I volunteered for an event called Battle of the Bands, which was put on by SXSW.  This was when SXSW and the Chronicle shared that rat trap building behind Dirty's.

LuvDoc: Yes, we were the bait in that rat trap! So how did you go from working at SXSW and the Erwin Center to being the Grand Overlord at the Erwin center? What puppies did you have to strangle to earn that sweet gig?

Rachel:  I was at SXSW for nearly ten years - full of music, fun and travel, but I always kept the ERC as the side gig.  When I left SXSW and went back to school finally, the ERC was still the side gig, and a good one for a student on the come up.  Then I graduated, and got this little jewel.

LuvDoc: What did you graduate in? I mean ... I'm not looking for a fashion breakdown but rather, what was your degree?

Rachel:  Linguistics with a Psychology minor .. but I was very cute underneath the robe!

LuvDoc: That must have made for some colorful sashes! Wait a minute...What does ERC stand for?

LuvDoc: They just through that R in there to make us think they're smarter than we are.

Rachel:  Nah, Liberal Arts is a very boring white.  You've gotta bring it with the upper degrees for the neck rainbow.

Rachel:  Remember, this is still the state - I cannot put our mind control techniques on the record.

LuvDoc: Naturally, but a fella has to ask.

LuvDoc: So, I guess the real question is, can you get me into the WWE Smackdown?

LuvDoc: OK, that's like Ben Hur. I seem to be obsessing on gladiator movies;

Rachel:  Quite frankly, I've been surprised you haven't put the touch on me for WWE before now. WWE entertainers ARE modern-day gladiators.  I'm just going to pour a little out for Andre the Giant...

LuvDoc: Can you get me down with Mcconaughey on the sidelines? I would like to be in Mack Brown's ear during some of those crisis moments. So you work both the ERC and the DRMS?

Rachel:  I just found out I'm getting a coach-style headset for football!  I'm aflutter!

LuvDoc: Ummm...where I come from we call that the Garth Brooks headset.

Rachel:  Yep.  the ERC is under the umbrella of UT Athletics, so we also staff events at DKR, MMS, DFF - OK, just messing with you.  Mike Myers for track, a small portion of the Disch, and a lot of our staff also works women's events. We also staff UT events like UT Main Commencement and Gone to Texas. So really, my job is split pretty evenly between the Erwin Center and athletics events with a little UT thrown in.

LuvDoc: Hardly any time for ROEAA (River Oaks Elementary Alumni Association, remember?) is there? OK, it sounds like you're pretty busy, so I'll let you go. Let's do the all-you-care-to-eat buffet at the jock cafeteria again sometime. That was a gut buster. 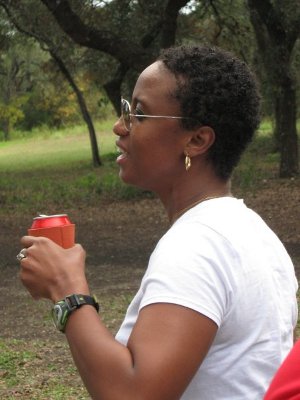 Go ahead Rachel, you’ve earned it!