Some Kind of Troll Inside Domy Books 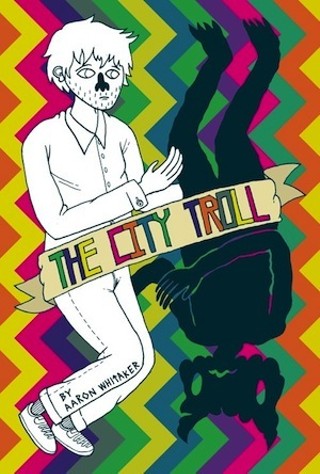 They see me trollin'. They hatin'.

Don't even get us started on Domy Books.

Don't even get us started on the ridiculous amount of graphic brilliance in that store, or the hard-to-find art periodicals that the place is lousy with, or the funky zines from all over that come to adorn a few choice surfaces between those glory-decked walls, or the cool tall guy who runs the place.

Don't even expect us to mention how Domy's got Blexbolex's new No Man's Land and the latest from Fantagraphics in stock. Or how the store's now carrying titles from Ugly Duckling Presse. And how the Schmaltz food truck with its mouthwatering array of comestibles is now part of the daily (and nightly) Domy experience.

Because, no, we're talking about the troll you can find there.

Hint: It's not about trolls, this book. Or, rather, it's not about your mythic Scandinavian sort of troll, nor the type of troll that lurks beneath a bridge, nor the kind that stirs up shit in Internet forums. No, this is the kind of troll a spiteful god creates in order to balance the overshadowing glory of The Perfect Man.

This troll's got flaws, see. He doesn't always know how to react smoothly in social situations. Doesn't usually have a suave demeanor when dealing with the opposite sex. Falls in love (or something like that) so ridiculously fast and doesn't exercise enough and is still struggling with a horrible relationship with his mother and –

Okay, he's twentysomething, this troll.
He's a fucked-up mess – but then so are most of the people he deals with.

Remember your own immediate post-highschool years? You were, what? Maybe still trying to figure things – yourself, foremost – out? Maybe not doing such a good job of it?

Yeah, well, Aaron Whitaker does a good job of capturing That Tumultuous Time, that sort of early-adulthood trainwreck, in this thick comic book of his. Oh, the hanging-out! Oh, the soul-searching! Oh, the drinking! Oh, the fucking! Oh, the divorced father who's gotten involved with some kind of granola-crunching woo-woo woman named Understanding.

Panels of cartoony black-and-white images, mostly highly expressive talking heads and just enough scenery so you know that it's all happening in this world, render the narrative for you. This is, come to think, exactly the sort of book the characters themselves would be carrying around and reading.

(Lucky you if your sense of identification with Paul and Ian and Julia and Emily and friends is more vicarious or a remnant of the past; you can enjoy it without too much damning resonance.)

So this is a thumbs-up we're giving the first big issue from Whitaker. It's partly a geezerly thumbs-up along the lines of "This kid's going places, I tell ya – he's got spunk, he's got the moxie!" (Oh, we're old, man; we're so old now.) But, these cartoonists, these fucking obsessed gotta-draw-all-the-time creatures who live among us … you know how, when they're like that – obsessed – their level of skill increases so quickly it can make your head rattle in wonder? From the looks of what Whitaker's currently working on – Space Riot – we'll soon be collecting his work regardless of the compelling stories or the well-wrought characters: We'll buy it just because his drawing style is so delightfully good.

But, yes, The City Troll:

Takeaway Phrase: "So why did you quit the anti-depressants?"

Page that'd be great screenprinted onto a T-shirt: 39.

Bonus: The restaurant depicted in the upper left panel on page 46?
We want to see an actual restaurant with a sign just like that, please.