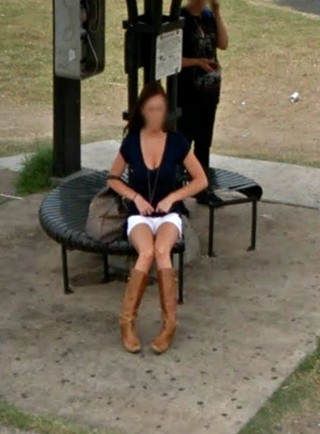 While it would be ludicrous to accuse the Google car of trying to take upskirt photos, this one makes a pretty strong argument. Good thing this woman snapped her knees together just in time or Google would have had to blur out more than just her face. Note, however, that Google did not blur the décolletage.

Why? Because even although Google is a huge multinational conglomerate whose tentacles reach into nearly every aspect of our personal and public lives, it also has, according to the Supreme Court, the same rights as a human being – in this case a human being who’s not immune to juvenile motorboat fantasies. After all, any human being with rights probably has needs and freaky fetishes as well.

Of course, getting lost in this woman’s cleavage, along with being a crass objectification of the female form, might distract you from those sweet ankle high boots which, although they could use a shine, nicely complement her blinding white short-shorts and hint that maybe - after her hostess shift at Truluck’s - she might be up for some late night dressage. Really, what’s the harm in a bit of after -hours horse ballet - as long as all parties are consenting and there’s an available equestrian center?

Let’s hope she has some jodhpurs folded up in that purse because even the most supple English saddle leather can chafe after a while.