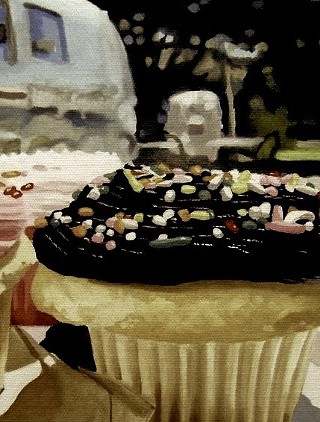 I'm not going to spend the next two weeks at Salvage Vanguard Theater, scouring the lobby Sherlockwise, trying to find out what the hell happened to all those Kaci Beeler paintings.

That's because I happen to know that they're in my house, right now, those paintings: They're being stored there until the New Media Art and Sound Summit, that's taking over all of Salvage Vanguard this coming weekend, has come and gone.

That's right: Once the fleeting NMASS exhibitions of sculpture and 2-D art and video installations are dismantled in the wake of more synthesized music and swirling soundscapes and technological experimentation than you can shake a theremin at – because, whoa, Cinders is playing, and Ichi Ni San Shi, and Jandek, and so many more brilliant and/or atypical acts – once all that's past, I'm saying, those original Beelers that perfectly depict desserts and more savory meals will be remounted in the gallery for a closing reception with the artist.

But I won't be able to keep away from Salvage Vanguard Theater after NMASS clears out and the paintings have been rehung – because the weekend after the long NMASS weekend of the 14-17th, it's time for the annual Big Range Austin Dance Festival, and this year BRADF's founder & artistic director Ellen Bartel has wrangled even more talent than ever before, from Texas and beyond, and those troupes and individuals will be turning SVT into a temple of fierce human kinesis.

And, until the evening of the 23rd, that sweet Food Porn's gonna be back on the lobby walls, too.

So it's not like a person who gives a damn about aesthetic pleasure could keep himself away, y'know?