Some Things Demand an Answer

And never mind trying to blame the Louse 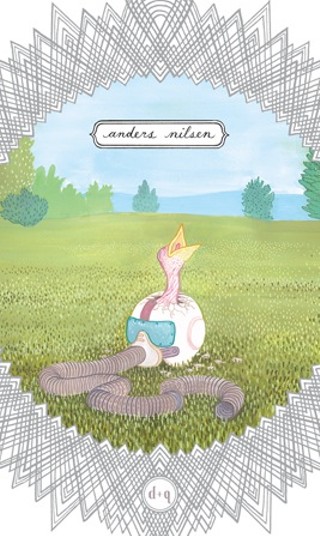 We Cannot Recommend It Highly Enough

"Brenner," she asked me over coffee and breakfast tacos at Julio's the other day, "why haven't you reviewed that enormous Anders Nilsen book that came out from Drawn & Quarterly last year?

["Ha ha," because the name of the book is Big Questions.]

I didn't answer her, at first.
Instead, I responded with a question of my own:

"What makes you think I haven't?"

Sylvia rolled her eyes. They're blue, those eyes, and I swear
they're an even prettier blue when she's rolling them.

"I keep track of these things," Sylvia said.
"Graphic novels. Drawn & Quarterly. You."

Yeah, she keeps track of me.
Because she's a goddam stalker, is why,
albeit in a nonthreatening and endearing big-sister sort of way.

"Maybe I've already written the review," I told her.
"Maybe I just haven't published it yet."

"And why is that?" asked Sylvia. "Especially since it would've been perfect timing,
about eight months ago, for a book that would make a terrific Christmas gift."

And she was right: The phonebook-sized thing, especially the expanded
deluxe hardcover edition, would've been a perfect holiday gift recommendation.
For people who love comics in general; for people who don't necessarily love comics,
but who like to grapple with The Meaning Of It All and enjoy works of art that make them
think about such things – especially if they can be simultaneously thinking, on another level,
Damn, the pace of this enigmatic tome, with its weird subterranean journeys, with its
flocks of birds more philosophical than any this side of Jonathan Livingston Seagull,
with its downed fighter pilot whose crashed plane has destroyed a house and left a mentally
challenged young man orphaned and homeless in the wilderness … the pace of this
(oh, let's call it vaguely David Lynchian, although maybe, uh, Tarantinoesque in the dialogue?)
thing is so deliberate and steady and it accumulates strength like an intravenous drip of
psilocybin-spiked bourbon.

[Sylvia does not approve of psilocybin-spiked bourbon. But that's another story.]

I shrugged. "I blame the Louse."

[The Louse is what I call my cat, more properly named Lady Withnail.]

"You always blame the Louse," said Sylvia, not inaccurately.

"Yes," I said, "but this time it's for real. Because when I got the new scorpion,
I needed something to hold down the lid of its cage so the Louse wouldn't
be able to get at it. So I put my copy of Big Questions on there, crosswise,
because it was so big and heavy, it was just the perfect thing. But Withnail, well,
she liked to climb up there and just perch on top of the book and stare down
at the scorpion for hours."

"And this was a problem why?" asked Sylvia.

"This was a problem," I said, "because that Louse likes to chew on the corners of things.
Like she's massaging her teeth and gums or something, you know? And I came home
one day after work and saw that, while perching, she'd fucking chewed two of
the book's cover's corners into mushy pulp."

Sylvia suppressed – barely – a laugh.
"What does that have to do with not reviewing it?"

"Well, I was embarrassed," I said. "I figured I'd have to tell people,
if I reviewed the book, that I'd let my stupid fucking cat destroy the thing.
Like I'm a terrible book owner, you know? And that's … pretty embarrassing."

I looked away, but I could almost hear Sylvia's eyes rolling.

"Brenner," she said. "You don't have to tell anybody anything.You're suffering under
your own ridiculous, self-imposed conditions here. And that's fine, really, because people –
well, I think – people deserve whatever stupidity they visit on themselves. Like those
idiots who refuse to get vaccinations or whatever. But for however much of a difference a
review in the Chronicle would help get the word out, might sway people into seeking
this book out for their own enjoyment … Listen: you're doing a disservice to those people,
aren't you? You're doing a disservice to the book itself, to what took Nilsen more than 15 years
to create and compile and polish until D&Q, well, damnit, how many books and DVDs do you
get from publishers and they're total pieces of shit? Because I've heard you complain about that.
And here you have an absolutely wonderful, enthralling work that …"

She went on for a while.
And – yeah, she was right, she was absolutely right.

I hate that goddam Louse.

Five Arts Events to Get You in That Holiday Spirit
Classics, classical music, ballet, and more

Thai Fresh and Lenoir Return for Dine-In, Osome Fêtes Antone’s, Jeni’s Opens with Free Ice Cream, and More
All the news that's fit to get your taste buds quivering