Your Betrayal, Caked on the Wall 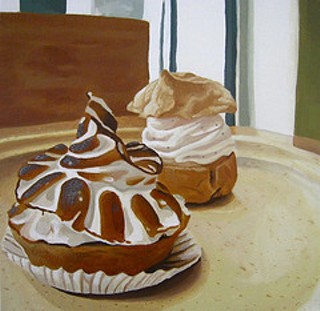 Oh, you butterfatted heartbreaker, you ...

Maybe you're familiar with wordsmith David Moses Fruchter, who's also known as Slappy Pinchbottom by listeners of his "Odd Preoccupation" show on KOOP Radio.

That's, ah, three-in-one – because one of the features of the Digestible Feats portion of this year's vast Fusebox Festival is called "Sweet Betrayal" and showcases Beeler painting (directly onto the SVT Gallery's east wall) a huge acrylic portrait of four desserts prepared by pastry chef Elliott from eerie magic-realist descriptions written by that Fruchter.

We mean, Beeler will be there, painting, for about twelve hours straight.

She'll start very early on Friday morning, working from photos of the desserts' prototypes, and she'll keep at it, brushing brushing, brushing, until the portraits are completed. You, lucky Austinite, are invited to visit the artist closer to the end of this pigment-frenzied marathon – starting at 6pm on Friday the 27th – and to partake of the actual desserts cooked by Jodi Elliott.

You might want to show up a bit early, because there's going to be a limited number of the desserts available, and because this event is totally free and open to the public.

(Yeah, we're a bit gobsmacked by that, too.)

The four types of dessert, Fruchter tells us, form a narrative of love betrayed and violence done. Each delectable is "a combination of sweetness and one of the other primary flavors: salt, sour, bitter, and umami."

Umami? That's the word that English recently borrowed from Japanese, right? It means, what, "a savory flavor"?

"Exactly right," says Fruchter. "And here, umami is the moment of murder."