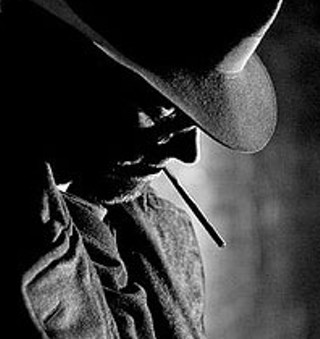 Don't be givin' ME the high hat, ya louse.

Well … noir is, of course,
a word that's open to interpretation.

In this case, it's interpreted as an audience-interactive mini-play of double-crossed gangsters & the snub-nosed violence of love-triangle revenge played out in the cozy confines of Austin's Dive Bar, right there across from the venerable Dog & Duck Pub.

Drinks are also, of course, open to interpretation. And anyone who's done serious or at least thoughtful drinking knows they're best interpreted, cocktailwise, with the hands and tools of an expert. So how's Bar Congress's magisterial Jason Stevens sound to you, friend?

Yeah: If you didn't realize this before?
Fusebox Festival ain't fooling around.

Which explains last Sunday's tech rehearsal for this potent & potable gig,
to which I and a few other lucky citizens were invited – as beta testers.

So "The Decline and Fall of a Thug in Five Drinks" is written by local scribes Steve Moore and Zeb. L. West and interpreted by that West with a little help from the Dive Bar audience while barkeep Stevens concocts libations corresponding to certain points of the story.

If you experienced the story of gangsters Tommy and Ned played out at a party, you might enjoy it the way Victorians enjoyed parlor games back in the day, sure enough. But in the setting of a bar, with Stevens tripping the light mixological, with the silly/inspired bits spicing this eternal darkling narrative, you're going to be having a hell of a fine time that's only partly due to your increasing intoxication via vintage libations crafted by a man who knows what's up with getting down to basics.

These are what liquid diversions await you among the trips and tropes of
"Bottled in Bond: Decline and Fall of a Thug as Told in Five Drinks":

Those, and the wacky underworld drama, served up amid a genre-appropriate music track compiled by KOOP Radio's Slappy Pinchbottom. Speak this sentence aloud, and it's the sound of recommendation.

Here's mud in your eye, you dirty rats …

Drinking, Writing, Staying Sober
You can’t do all three at once, no, but check this out