Baseball Hero To Be Honored With Mural

The late Willie Wells to be immortalized by Tim Kerr 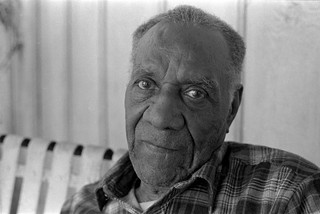 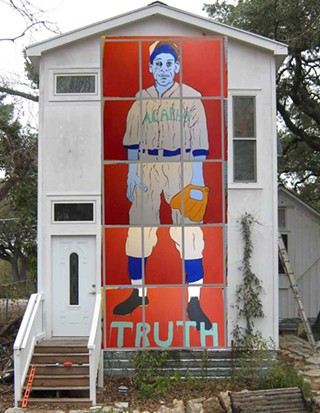 The late Willie Wells was one of the greatest shortstops who ever lived. Despite the racial barriers that held him back, he excelled in the sport he loved and passed along his knowledge of the game to the likes of Jackie Robinson, Larry Doby, Monte Irvin, and Don Newcombe.

Wells, who spent his final years in the house where he grew up on Newton Street in South Austin, never lived to see the day when he would finally be admitted to the Baseball Hall of Fame. But he wasn't that sad he missed out on the "official recognition." "What makes me so proud is the kids, people, know who Willie Wells is," Wells said in an Austin Chronicle interview I did with him in 1988.

Fast forward to 2012. Paul K Johnson, who owns the house next door to where Wells lived, is no baseball aficionado. "I just want a local hero to be given due respect," he says.

Johnson had a blank wall and wanted something there so he commissioned another Austin legend, artist and musician Tim Kerr, to paint a mural honoring Willie Wells. While many who have lived in Austin for a while know Kerr for his musical work (Big Boys, Poison 13, Bad Mutha Goose, Total Sound Group Direct Action Committee , etc.), not everyone know he earned a degree in painting and photography at UT Austin.

"When I described the location and its history, the choice became obvious," says Johnson. "Tim's work tends to emphasize civil rights and other historical personages who fought for self-determination. Tim realized the grace of portraying Mr. Wells on that wall. Mr. Wells was a giant to sports fans who knew of him and among athletes who played with/against him. In his old neighborhood, now he will literally be seen that way."

Johnson says the home's tenants, Rene Pinnell, filmmaker and entrepreneur, and Claire Huie, documentarian, are creating a short documentary about the mural they will post on YouTube. They have interviewed Kerr and shot some at his studio.

"The story (to me) is one of following your dreams and of recognizing where we are," says Johnson. "The respect we show those who came before us opens our eyes. It’s a powerful gift available from the act of giving. While I haven't been a baseball fan, learning about Willie Wells inspires me to pay attention, whatever it is I'm doing. In spite of the serious disadvantage he lived with, he still excelled and spent a lifetime encouraging others to do so, too. The truth is in the pudding, so to speak. It’s in the work. The same can be said about Tim and his works. May these efforts now help others to work well, too."

After January 7, the mural will be visible to the public in the alley behind the house at 1707 Newton St. For more information on Tim Kerr, visit his website.