BPness: A Line in the Sand 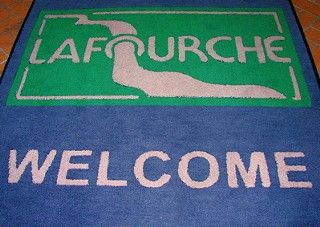 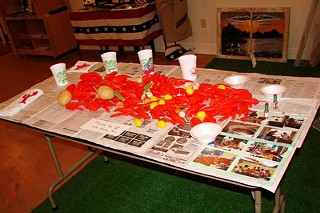 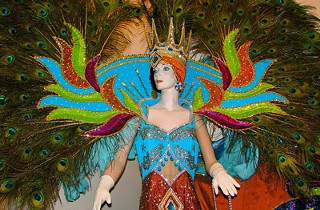 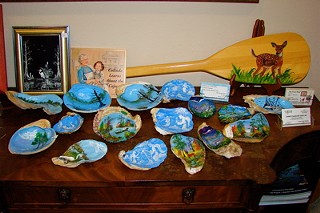 An opportunity arose to drive a friend to New Orleans (and visit my kid working there with AmeriCorps) last weekend. But I couldn't shake a nagging feeling: It would seem odd to be so close to the Gulf of Mexico and to not at least try to learn firsthand about what's happening on the coast during this insane oil spill tragedy.

So I rented a car for the day to see what I could see and decided to record some notes along the way.

Oh, man, what a late start. Upon arriving in NOLA last Thursday night, I didn't get settled into my friend's place in the Marigny until 4am, so my intended pre-dawn departure was out of the question.

Driving down Royal to get over to I-10, life is very French Quarter. Young guys scramble up ladders to reach second-story balconies. Wrought iron touch-ups, restorations abound. The tourists take to the boutiques for antiques. Touchdown Jesus (or, as I like to call him, "Fish Story" Jesus) is holding watch behind St. Louis Cathedral, and I'm just heading for I-10 'cause I've got to get to Grand Isle, in hopes of achieving some clarity in this murky, murky mess/ Or at the very least, to bear witness to ... something.

Radio's tuned to WWOZ – always a perfect soundtrack: "Do you know what it means to miss New Orleans?" On this easy morning, you wouldn't even know that something named Katrina had come through just five years ago, and you wouldn't know by looking on the faces of the happy people milling about that an equal if not much greater danger lies in wait along the Louisiana coast.

1pm, after a few errands

I-10 is in the rear-view; I'm now on LA Hwy 90 Southwest. For some reason I reckon that it might be smart to take the occasional air-quality test (i.e. rolling down the window) every 20 minutes. So I sniff the air. Smells like summer in the country. Fishy summer. The Louisiana landscape is ripe for 50-cent words like "verdant," "rich," and "sensuous." It's hard to just pluck one. Like the Everglades of my homestate, Southern Louisiana's eternal struggle between water vs. land is overwhelming in its luscious green understatement. Rivers and rivers of grass, marsh, and all the life that they host. It's not, of course, pristine. There are lots of signs of our (humanity's) intrusion.

Billboards, for example. Billboards that say things like "jobs on oil rigs" "jobs on fishing boats." That was a few miles back. Now in Lafourche Parish (pronounced LaFoosh, y'all), the tone is a bit more contemporary: "Oil Spill Damages – Question Mark – You may be entitled to compensation." Oh lawyers, would that our country's oil spill response plans be as Johnny-on-the-spot as you!

I'm heading over to LA Highway 1 now. Under the bridge at the turnoff, I decide to give in to a distraction: The Lafouche Parish Travel Visitor Center. As I suspect, it is brimming with free maps (I don't like GPS), super friendly people, lots of community pride, and some great local color: displays of Mardi Gras gowns backed by crawfish boil tableaus (see pictures). There's also a small table of handpainted, locally harvested shells with scenes reflecting the most idyllic visions of area dear, cypress, and fishing boats – a not-so subtle reminder of the small pleasures that hang in the balance in this man-forged disaster.

Cellphones, like GPS, are not high on my "awesome!" list. But they make sense to me on long drives like this. I'm using my time to get advice from Louisiana friends and to gather referrals to folks who can help with info, insight, and connection along the coast. My work colleague Doug referred me to the very helpful Dwayne Featheree from NewOrleans.com and he and I are on the phone brainstorming. Also, another buddy, Heyd recently worked on a TV project with Austin ex-pat and Texas-Ex Beth and she is trying to dig up the name of – as she characterizes him – a very animated and talkative man who owns a shrimp processing plant in Grand Isle. He's been on the national news many times since the crisis began and is hopping mad about the BP spill. Beth says he's a great interview and pretty much knows everyone on the island. So I make a plan for what to do once on the island and start to follow leads, like so many signs on the road.

Highway 1 is for the most part a delicate two-laner which passes through all sorts of small towns interrupted on occasion by – again – very verdant, beautiful countryside – it's not really even countryside. It's marshside; beautiful beautiful Louisiana marshes. Oh God. This is what we're going to lose. Oh God.

Highway 1 is also where I begin to witness the sentiment of the locals. (See entire blog post about it).

There's still an hour or so stretched before me and my mind wanders. A strong visual comes to mind. Aerial and satellite photos of the Louisiana coastline remind me of x-rays or cross-sections of human lungs. The small inlets, tributaries, estuaries, and oxbows and bayous and passes create these webs and networks that resemble the insides of lungs. And as a person with not-great lungs, I am reminded of the function of the lung as the filter for the atmosphere, how you bring the atmosphere into your body to nourish your corpus with oxygen and the things you need. Those little bronchioles, or as a funny doctor once described to me, the "little broccolis" down there in your lungs basically filter out things like, you know, irritants and mucus, then ease the good oxygen into your blood stream so that it can get to your heart, etc. It's interesting to think of Louisiana's coastline as serving a similar purpose for the… well, pretty much the entire United States. Louisiana wetlands make up over 40% of the nation's coastal wetlands.

Recently on the Rachel Maddow Show, one of her guests, Executive Director of the Harte Research Institute for Gulf of Mexico studies at Texas A&M University in Corpus Christi, Dr. Larry McKinney talked about the area (actually, they were a bit to the east near the Barataria Preserve) and what it represents to the country – as estuary, the outflow of the Mississippi, and source for oil: "It‘s America‘s toilet, it‘s America‘s sushi bar, and it‘s our gas station."

BPness, Part 2: A (Long) Line (of Boom) in the Sand
Notes from Kate's trip thru Lafourche Parish to Grand Isle, LA., Part 2.