Lit-urday: All the Single Ladies It's been a long week, and now you deserve to have one day when you can curl up with a good book – let's call it Lit-urday. Maybe you feel like a novel so full of dancing, hard work, maternal beauty, and fierce independence that Queen Bey herself might enjoy this unique novel. That is, if Beyonce digs bad-ass science fiction.

Headlines covering both the fight for women’s rights and mass pollinator death make Laline Paull’s debut novel, The Bees, timely, but it’s her brilliantly imagined story of one female bee that will really pipe the messages to human antennas. Inside the striking cover art - a gilded swarm buzzing above enormous, bold black font - lives a sure-to-be classic book somewhere between Watership Down and A Handmaid’s Tale, endorsed by Margaret Atwood herself.

Flora 717 is an untouchable - a worker bee charged with sanitation and destined to a life of rigor and rules. Deemed brutish and deformed, Flora’s saving grace is her unusual intellect, and as we’ll discover, her heart. A stroke of luck inspires Flora to rev her thoracic engine for the rest of her days, climbing the slippery slope of a high-structured caste system, making friends and enemies in equal numbers. She experiences the Nursery, and ultimately finds her calling as a forager. Fluidity between kin allows her survival, but there’s an element of Super Mario Brothers-style colony challenges at every level: torn wings, birds, wasps, poisoned chem-trails, food shortage, and an absolute ban on breeding. Oh, and these spiders don’t weave helpful word webs à la E.B. White’s Charlotte; they’re menacing masterminds.

Humans only really appear in the prologue and epilogue, but hints of our presence are surely felt. In fact, I still think of the mid-plot calamitous retrieval of honeycomb every morning as I’m poised to squeeze the honey bear into my coffee. The precursory jolt makes me think that our preprogrammed days of routine and ritual aren’t so different from this dystopian nature story. Maybe it’s a microcosm, a societal critique. Anarchy - in its truest form - whispers, but ultimately Flora’s newfound individuality is challenged most by indoctrinated Hive Mind devotion to her Queen, reinforced by gravely rigid high priestesses: “Ego is the great peril of your occupation. You begin to believe what the flowers tell you, instead of the Holy Law. Only Queen and Colony matter."

It’s an odd read, no doubt, but that’s part of the beauty. Scent and vibration transmit information; choreographed dance sequences communicate plans: “She danced the falling poppies and the naked fields, she ran figure eights to teach them direction and azimuth”; and coded floor tiles line the hive directing robotic traffic. Is every bit rooted solely in fact? I’m really not sure. But the blend of literature and science is riveting regardless. This is legitimate science fiction.

But mostly it is just the story of a girl.

Flora’s discovery of the fierce, forever-bonded love between mother and child is particularly interesting, and it's challenged twofold. Her own forbidden egg is in grave peril, and Flora’s mother, the Queen, reveals an intriguing, ahem, humanity that serves to give Flora strength to defy logic and governance. Of the worshiped Queen, “She was clothed in a mantle of pure white waxen lace, so light it flowed like air around her. Her divine fragrance was now blended with the wild air that had blown through the broken and ravaged hive, and when she smiled on her daughters, bright and steady waves of love and reassurance flowed through the air.”

Paull's use of human language to describe this tiny, intricate world is classic storytelling at its finest. The Bees is brimming with emotion unexpected from a group of Apis: “Far below, a vixen paused to stare up, then melted away. Stars burned tiny holes in the twilight and then a pale moon traced a slow silver arc through the sky. Its beauty made Flora’s heart burst with love for her lost egg, and only the shadow of the crow above stopped her sobs.” A few scenes of brutality, reminiscent of the grisly Grimm’s, remind us that nature is a hard knock life, only The Bees boasts a refreshingly feminist spin on fairy tale-style plots.

Oh, and the male bees? Well, the drones have their own bloody worries: “Filled with consecrated anger at every insult and humiliation, every wasted forage and sullied passageway, [the female bees] avenged themselves on the wastrel favorites, the sacred sons who did nothing for their keep but brag and eat and show their sex to those who must only labor for them and never be loved.”

Sure, if the point of writing about a new novel were to formulaically nitpick every less-than-glowing detail, this, as any book, would fall prey to the pen’s mighty sword. My only criticism would be a slow beginning and sort of predictable culmination, but I was still cheering and tearing in those last few chapters. It’s a wildly creative book that resonates deeply for quite a long time. I’ll bet that upon finishing this book - one of my new favorites - you’ll think twice about spraying your yard, and maybe even take the time to stop and smell a nectar-laden flower. 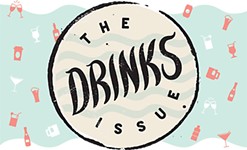 Drinks Issue 2020
It's a weird year, but we still have to drink something