Lenny Kleinfeld paints a vivid portrait of murder in Chi-town 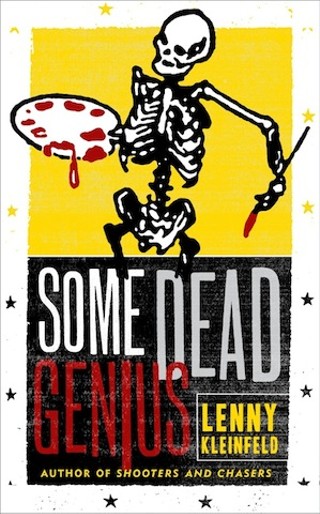 It's been a long week, and now you deserve to have one day when you can curl up with a good book – let's call it Lit-urday. Maybe you feel like getting out of town, feel like dropping in on the Windy City, where there's no shortage of rough-and-tumble cops, corpses, and corruption in the art scene.

Wait a minute, the art scene?

Never heard of this goddam Lenny Kleinfeld until his Some Dead Genius crime novel was tossed onto the pile of review-this books on the cluttered top of my Chronicle desk. Now I'm never gonna forget his name.

Book like this, the second one featuring Chicago homicide detectives Mark Bergman and John Dunegan, it's the kind of book that, after you've devoured its clever, well-paced plot and its terrifically real characters, you thrust the book into the hands of another crime-novel fan who you're already feeling jealous of because now they get to read it for the first time.

The criminal hook in Some Dead Genius is this: There's a rogue art dealer and a loan shark with delusions of goombah-dom who've teamed up to make money off painters and sculptors; they do this via buying works from established and rising artists and then reaping the drastic price increase that's spurred by those artists' deaths. Of course, they're also causing those deaths, our dastardly duo. And of course those deaths and their patterns of occurrence eventually come to the attention of the police.

Detectives Bergman and Dunegan are initially thwarted in their attempts to solve the series of crimes, thwarted not only by the cunning of the killers but by various political machinations in Chicago's city government and the eventual involvement of some mobbed-up heavies, and – well, that sounds like a decent story, a not unusual story, for the crime genre, right?

So use it as the baseline for gauging your appreciation, because that set-up is solid and works just as it should. But what it's a set-up for is above and beyond the call of genre duty: A sharp insider's look at the urban art scene, and an especially addictive narrative voice. Your authorial guide, your third-person omniscient in this arch thrillride, is savvy and chummy and never neglectful of a cultural or police-procedural insight, and you get to wishing it would tag along inside your head and inform your own exploits when you're not busy reading.

Observe Bergman and Dunegan going to get lunch: "They walked half a block from their usual Thai joint on Belmont. Walked, shoulders hunched forward, into an umbrella-killing squall, clutching shut their raincoats, which neither cop had buttoned despite the slashing rain and chill; it was thirty-three degrees, the temperature at which rain can't quite bring itself to turn into snow, and settles for being suspiciously thick ice water. Springtime in Chicago."

Catch the perspective of a security guard in the Art Institute of Chicago: "What Maleekwa didn't get – wasn't sure she wanted to – was why so many people – men, women, young, old – would get hypnotized by that crazy-nasty Ivan Albright painting, Picture of Dorian Gray. Dorian Gray had clothes on, but Jesus, it was like his body was the whole Wikipedia of ugly diseases. And not just him – even the wall and furniture and rug in that painting had infections and plagues. Disgusting. Yet near as many got hypnotized by it as by the nudes."

You see? Lenny Kleinfeld? The former Chicago playwright and journo who for three decades has made a living writing screenplays that get optioned but never developed out there in Hollywood? You'd think it was Bill Cotter writing under a pseudonym.

And there's one thing more to point out while recommending the hell out of this book: The humanity of it. The lack, I mean, of misogyny or homophobia or stereotyped caricatures or any of that shit, no matter what diversity the crowd reveals. The cops in this story – at least young Bergman and grizzled old Doonie – they're not being all eggshell-walking and politically correct; they're simply unfazed and non-dismissive about their fellow citizens; as if people were people, you know, and no big deal about it. And, brothers and sisters, that is so refreshing in a Gritty Urban Detective Yarn. Waiting to See a Movie? Try This.
Sometimes the lines you're doing have nothing to do with cocaine