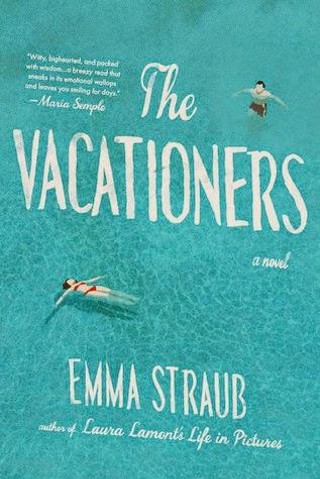 It's been a long week, and now you deserve to have one day when you can curl up with a good book – let's call it Lit-urday. So is Emma Straub's new novel of snobs on holiday the one to pull off the shelf?

The Vacationers by Emma Straub

The book jacket is lovely: A delicate turquoise with tiny swimmers floating here and there, the cover art looks like it could have been taken from Leanne Shapton's Swimming Studies. Combine the hardcover with a few other equally photogenic objects (a cat, some flowers, sunglasses, a selection of pastries, etc.) to make a perfectly 'grammable still life. The Vacationers is less a work of literature than a marketing campaign to conquer every single summer book list. It's hard not to admire Emma Straub's love of the game: No matter the platform - social media, regular media, her website, your local bookseller - she's not embarrassed to admit that she wants you to buy her book. "I will happily settle for the prize of Sells a Lot of Copies."

There's no doubt she'll succeed. Already a best-selling author (2012's Laura Lamont's Life in Pictures), Straub has written a book as engrossing - and as infuriating - as a Nora Ephron movie. It's a given that everything will work out in the end; the enjoyment is watching the fumble toward the finish line. As the book opens, Franny and Jim Post, along with their daughter Sylvia, are on their way to stay at a private house in Mallorca, where they'll meet up with two other couples - their son Bobby and his girlfriend Carmen; and Franny's best friend, Charles, and his husband Lawrence. The Posts have been together for 35 years. Franny's a successful food writer ("Ruth Reichl with an attitude"); Jim, until recently, was the editor of Gallant (in other words, GQ). They live in a "too large" house on the Upper West Side, along with Sylvia, who's about to go to Brown. Their life is not entirely charmed, however. Jim was forced to leave Gallant after getting in trouble for having an affair with a 23-year-old editorial assistant. His wife, who found out after they'd planned the trip, is furious, unsurprisingly.

Straub is unafraid to make her characters flawed, which adds to the novel's charm. Both Sylvia and Franny have rich interior lives, and their frequently petty behavior makes them all the more entertaining. Sylvia, especially, feels fully formed, and deserves a novel to herself. Yet it may have been overly ambitious for Straub to write this prickly family into the gentlest of plots. Of course, countless comic novels manage to convince their readers to root for fairly awful protagonists. But part of what makes those novels work is that those protagonists tend to suffer - and make the reader laugh while doing so - on their way to a happy ending. Like Sylvia, Straub grew up in New York City and is the daughter of a famous author, and perhaps she feels protective of the Posts. For whatever reason, she can't bear to let them suffer much at all, or to have too much fun at their expense. They might (literally) take a blow on occasion, but everything is cushioned by money and class, and actions have the slightest of consequences. Jim loses his job, but there's no indication that this puts the continued ownership of their home, Sylvia's matriculation at Brown, the titular vacation, or any other expenditure in question.

Jim's transgression is equally low-stakes. "Madison Vance had appeared like a lump of kryptonite, as suddenly as if she'd fallen out of the sky. She was forward, and brave … She had made it clear that she wanted him, in that way." Jim doesn't grow bored with Franny or lose interest in her sexually. Instead, he simply gives into the advances of a gorgeous young woman who seemingly chooses to seduce him not to get ahead or to extort him (she, too, is wealthy and connected), but because she's attracted to him, never mind that he's on the eve of AARP membership. The end of the affair isn't discussed in the book, and no explanation is given as to why Madison decided to tell on him. She simply disappears, like a proper deus ex machina. What is emphasized is how bad Jim feels, and how much he still loves Franny. "Fran had all the usual feelings about her body's changes, about menopause, but to Jim, she still looked just as beautiful as she ever had." This is fairy-tale adultery, from the point of view of the betrayed.

Straub's considerate treatment of the Posts would be more understandable if they weren’t so ripe for comeuppance. Each of them is unapologetically snobbish and happily unaware of the world beyond their own circle. (Unable to pronounce Puigpunyent, the name of the town they're visiting, they decide to call it "Pigpen.") Straub writes in the third person but shifts her perspective from character to character. It's unclear as to how much she's trying to accurately portray their prejudices and how much she's reflecting her own biases, since no one gets taken to task for any of it. Despite the fact that Bobby is basically Patrick Bateman without the ambition, his parents mainly seem concerned that he's not living up to his potential, and react to the revelation that he's been working as a personal trainer with pure horror. It's realistic enough behavior, but the opposite of endearing.

Then there's the unadulterated disdain that the rest of the group feels for Carmen. It appears that Straub intends Carmen to be a sympathetic character - she's a Cuban-American who's been supporting herself since she was 16, and she always helps Franny with the dishes. But she's less real person than collection of "tacky" qualities. Like Bobby, she's a personal trainer (though unlike him, she's a successful one). She spends the vacation counting calories instead of eating Franny's fabulous food and doing a lot of squats in order to maintain her "firm, round bottom" rather than swimming in the pool. She's never without freshly applied eyeliner. It goes well with "clothing for blind strippers," which she wears when she's not wearing her "adult-sized playsuit." She's not much of a reader, but she's pretty excited about a book called Your Food, Your Body. She's one of those girls, according to Sylvia, "who didn't know enough to see that their boyfriends treated them like garbage." However, her greatest crime - greater even than being a personal trainer! - is being "too old" to give Bobby children. Straub devotes a tiresome amount of time to the other characters' ruminations on Carmen's age and supposed barrenness. "There was nothing physically wrong with Carmen, save for the lack of egg production in her forty-year-old ovaries."

It could be argued that it's unfair to expect too much from The Vacationers, when it's obviously meant to be a harmless confection. But there are far too many books out there that manage both to provide a pleasant diversion and hold up to greater scrutiny (see anything by Kate Atkinson, for example). Read The Vacationers if you must, but don't read it too carefully.