Get to Know Zadie Smith 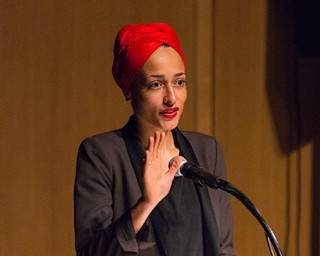 Zadie Smith was in Austin Thursday for a talk sponsored by the Michener Center for Writers. She brought with her a new short story, much good humor, and interesting thoughts about the link between her teaching and writing.

She arrived a little late, leaving the packed Blanton Auditorium both anticipatory and chatty. The lights were dimmed, and Lester Young's jazz sax was pumped into the room: A seemingly intimate moment was on the horizon.

Smith came out in her signature head wrap, a deep red number that only enhanced her natural elegance. For the reading, she chose her newest story, a piece from the most recent Paris Review.

"Miss Adele Amidst the Corsets" concerns itself with a drag queen dealing with a recent tragedy: a broken corset. Most of the story takes place in a small shop where she seeks a replacement amid a cacophony of noise, conversation, and possibly prejudice.

Because it is set in New York City, Smith apologized in advance for the American accents she would have to force through her British mouth. She needn't have; it was lovely. "Miss Adele" is exceedingly contemporary, with references to millennials, Downton Abbey, gentrification, and fracking, in addition to New York-centric talk of the High Line, cupcakes, and the Naked Cowboy. Yet it moved slowly despite this modern inclination. Smith has the ability to slow time and peer over the reader's shoulder, pointing out small details alongside bits of scathing commentary.

The Q&A period allowed her to connect with the appreciative audience, answering listener questions with candor and humility.

Her influences are many, but Smith claims it is those works from childhood that affect us most; for her, that was Roald Dahl and others. Lately, as a part of her current writing endeavors, she has found herself reading the works of science-fiction writers like Ursula Le Guin and Octavia Butler. As a teacher, she has some books she reads over and over, like those by Nabokov and Kafka.

Having a career in academia feels natural to Smith. She sees it as an extension of being a student herself: go to class and talk about novels with like-minded individuals; then off to the library to write. She has surely found her place.

Smith’s fame was brought up by a questioner who asked, only slightly tongue-in-cheek, "What's it like to be a literary superstar?"

"I don't think it's a real category," she responded with laughter. "I'm not bothered when I walk down the street." She claims that while authors are supremely important to a some people, "99 percent of the world doesn't care." Her lack of pretense in this moment was refreshing.

Racial identity in her writing was brought up, and Smith acknowledged that it is a tricky subject. Having been raised in England and being of mixed heritage, she is aware of how race has been used in literature, but tries to ignore it while writing.

While talking recently with Chimamanda Ngozi Adichie – another female author of color from England but with roots elsewhere – they both admitted that before moving to the United States, they had no idea of the racial connotation of foods like watermelon and fried chicken. These stereotypes have been used to mock and ridicule over time, but Smith tries to move past this and be honest in her depictions of all characters.

At only 38 years old, Zadie Smith has much more writing in her, and whether it's short stories, novels or nonfiction, she’s sure to keep challenging her audience. It’s not in her to do otherwise. 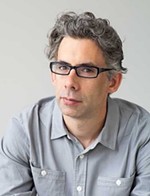