The Junot Diaz event Monday night started before it ever began. Well before show time, the auditorium in the Blanton Museum of Art filled to capacity, so Diaz took matters into his own hands and brought the show to the people. 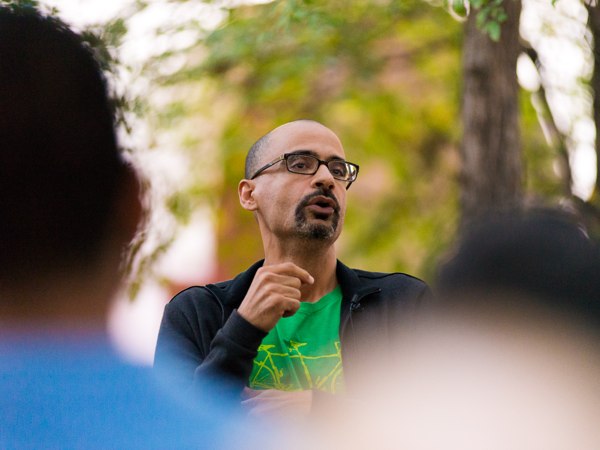 A large crowd gathered outside, forming a circle around the T-shirt and fleece-wearing Diaz while he did a mini-reading for the overflow crowd followed by questions more political than literary, if that distinction even exists in his world.

When he finally made it back inside, the crowd ate up all hour-plus of the prize-winning author, as he eschewed the podium in favor of owning the entire floor, connecting with his eager fans as intimately as possible throughout a reading and Q&A session.

The reading was supposed to be from his new book, This Is How You Lose Her, a collection of short stories set in his familiar world of Dominicans in New Jersey. After borrowing a copy from the audience, Diaz changed his mind and decided to read from his previous book, The Brief Wondrous Life of Oscar Wao, the 2008 winner of the Pulitzer Prize. 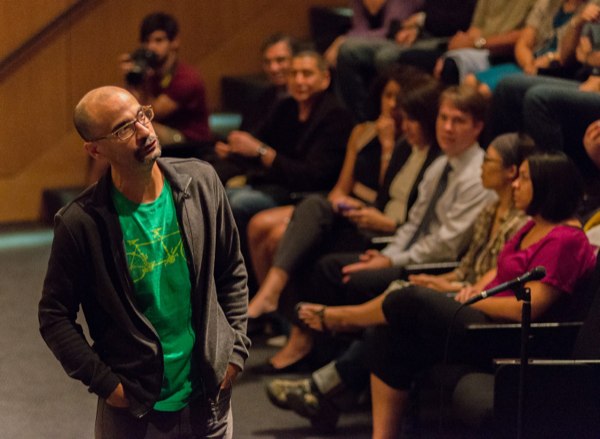 But he spent the majority of the time answering questions, and exhorting the audience to think and question everything from the academy, this country, and most poignantly, gender constructs.

The question-and-answer session was lively and varied. A student asked Diaz to respond to the recent spate of bleach bombings near campus. The safety of nontraditional students is a big issue for Diaz, and he strongly urged all parties to confront this problem head-on. He brought up the issue of rape on campus as an example of an ongoing tragedy that still hasn’t been properly dealt with.

His most heartfelt words were reserved for young, urban males in this country. While Diaz recognizes the advantages they’ve been given by patriarchy, he derided contemporary male culture as unwilling to embrace vulnerability while being constantly engaged in numerous violences.

In response to a question about his portrayal of females, Diaz addressed the misogyny and male-centric viewpoint present in most of his writing. He made the case that only by expressing the full range of male experience, warts and all, can we address its problematic nature. He hopes even feminists will be able to use the voice he’s speaking with to someday turn the corner on this outdated form of masculinity.

This reading was sponsored by the Texas Institute for Literary and Textual Studies and the Harry Ransom Center, both arms of the University of Texas.