Donny Cates Is No 'Buzzkill' 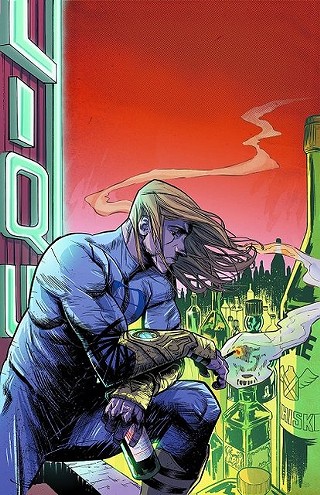 Superman is powered by sunlight. Wolverine has his mutant genes. For Ruben, the hero of Buzzkill, by Austin-based comic writer Donny Cates and Toadies drummer Mark "Rez" Reznicek, his superpowers are activated when he gets really, really drunk.

At its heart, the new four-part miniseries from Dark Horse Comics is about addiction. After a blackout drunk session, Ruben decides he has to go on the wagon, but how long can a superhero with a drinking problem stay sober, especially when he may need his powers to survive his archenemies?

Austinite Cates is a lifelong comics reader, and a familiar face behind the counter for anyone who's shopped at a host of comic stores, including First Federal, Funny Papers, Southside, and Thor's Hammer. "Which are all gone now," said Cates, who was managing Funny Papers when it closed. "I was there when they locked the door, and I guarantee you that I have a lunch pail in there still."

Finding himself with a lot more spare time, he was left with a conundrum: what to do next? "I had never thought of doing comics," he said. "I had never picked up a pen to write. I decided when they all shut down, 'I don't have any skills, I don't know how to do anything.' But I do know a lot about comics. It's the only thing I know anything about."

While studying sequential art at the Savannah College of Art and Design ("It's the only accredited university [where] you can get a real degree in comics") he got an internship for Marvel Comics, working in the New York editorial office for their Ultimates line. "I had a blast," he said.

So how did two Texans, Reznicek and Cates, meet in the Big Apple? As is often the case, it's really about who you know. Cates said, "My best friend from preschool [Wes Todd, vocalist/guitarist with Here Holy Spain] ended up becoming their tour manager." One miserable birthday, when he was living in Queens by himself, Cates got a call from Todd. "'Come to the show, and I'll give you a pass, all that VIP stuff.' So I went out there, on my birthday, sat in the audience alone and watched the Toadies." After the show, Todd grabbed him and asked him if he wanted to hang out afterward. "He said, 'I've got to do a bunch of shit, so I'm just going to put you back in the green room.' I went, 'Wait, I don't know anyone back there.' He goes, 'OK, wait here,' goes and grabs Rez, and says, 'Rez, come here. Donny works at Marvel. You guys talk."

The two bonded instantly. Cates said, "Rez is and always has been an enormous comic book fan. He actually put an addition on to his house just to house all of his comics. If you look at pretty much any band photo of them, Rez is always rocking a Batman shirt or a Superman shirt or a Green Lantern shirt."

After that night, Cates carried on with his career, getting his first title – Hunter Quaid – published in Dark Horse's anthology, Dark Horse Presents. "He's an alcoholic 30s detective dude driving through space and time, like an American Doctor Who with a lot of violence and not nearly as clever," said Cates. The next time the Toadies were in Austin, he was hanging out on their tour bus. "I told Rez, 'Hey, you're really into comics, have you ever thought of making one? You ever have any ideas, here's my number, here's my email, call me.' I remember driving home with my wife thinking, man, that would be so fucking cool. He's not going to do that, but it would be so fucking cool."

Two months later, Rez emailed. Cates said, "He wrote, 'I have a little baby germ of an idea,' and it was what if a guy gets powers from drinking alcohol and doing drugs."

The pitch struck a chord in Cates. "I've always been interested in addiction," he said, and it's already been a rich narrative thread in comics with the famous Iron Man "Demon in a Bottle" story. This idea was a way to turn a comic convention on its head. "They say, when writing short stories and fiction, start as close to the end as you possibly can. I started thinking about modern comics, and how your big superhero comics, Marvel, DC, Image in some stuff, you only ever see a first and a second act. You're never going to see the third act, because that's the downfall, the end. I wanted to write a comic book that's a third act."

"I started thinking of big event comics, so Buzzkill starts a week after a big blockbuster event. Ruben, our main character, something happened to him, but he doesn't remember at all. When he wakes up, there's thousands of people dead, a city destroyed, and he has no idea what happened."

The miniseries follows his attempts to get clean, and in this Cates found a handy new writing tool. He said, "The 12 steps are a complete story. Your inciting incident is admitting you have a problem. The 12 steps are literally a way to build a story, which is a really beautiful thing."

With his old Savannah college friend Geoff Shaw as artist and Hunter Quaid colorist Lauren Affe as colorist, they started working on a pitch. The original plan was for a 12-issue series called Blackout … until they found out that Dark Horse President Michael Richardson was working on his own comic also called Blackout. "It was a perfect piece of timing," laughed Cates. "When he saw a page on his desk that said Blackout, it forced him to look at it."

Buzzkill's first issue is out now from Dark Horse Comics.