LoneStarCon 3: Lessons From My First Worldcon

Oh, the mistakes I’ve made in my first gathering of the genre faithful 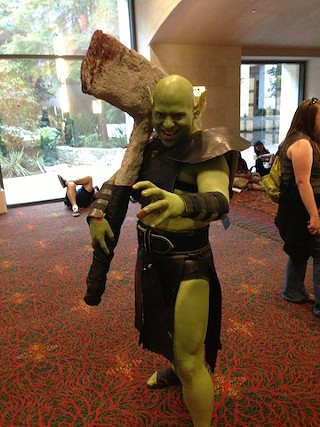 As a relative newcomer to the science fiction world – make that universe – fandom culture is not second nature to me. When I hit the Henry B. Gonzales Convention Center on Thursday, I didn't know a World of Warcraft orc from Shrek. Oh, how young and naive I was. Here are some things I learned from my first gathering of the genre faithful.

1. Con folk tend to be friendly and respectful. I don’t know what the culture was like in the past, but as a woman who has read all the horror stories, I was delighted to find that I was neither shunned for my relative ignorance in fannish matters, nor stared at for my boobs. Panels and workshops on geek manners and con etiquette have become more popular over the years, and they seem to be paying off. The schmoozing seminar I attended, featuring scripted interactions, body language demos, planned escape routes, and a thorough explanation of the social contract, should be de rigueur for the professionals of any industry (and a quarterly requirement for all grad students). Which brings me to …

2. There are two cons: one for the fans and one for the industry. Of course, since every sf fan is also an aspiring sf writer, there’s quite a bit of overlap. Why not dress for the industry con and weasel your way into the Tor party? But if you do, be prepared. You’ll be elbow-to-elbow with agents, editors, published writers, and a million aspirants to these positions. While the bathtubs full of beer might initially ease the social anxiety, a pocket full of business cards is a more essential accessory than a drink. But since you're going to drink too much bathtub beer anyway …

3. Bring expensive moisturizer. Trained puppeteer and science fiction author Mary Robinette Kowal, an expert on both Regency costume and Jane Austen manners who led the schmoozing seminar, says that a really "tony" moisturizer will keep you from looking like the walking dead on your third day of short-slept schmoozing, which will translate into more successful networking, scads of Twitter followers, a book deal, and an overall happier and more fulfilling life. No word on whether she uses La Mer or and a Chanel BB Cream, but she looks like Tina Fey so I'm inclined to listen to her. Another tip for retaining your youthful glow …

4. Skip the bid parties. Or just cruise past them and hit the ones with the best refreshments. It’s adorable to see cities competing to host the 2015 Worldcon, but the small press parties are better, and you have a better chance of getting free books out of it. (You might have to eat a bug to get one, but they're full of protein, so you don't have to drink that Lone Star on an empty stomach.) Besides, it's hot in Texas, but do you really want to take a chance on getting seduced by pictures of frosty landscapes and attractive people in the Helsinki suite? Nobody can afford to fly to Helsinki for a con. Better to slam a few local microbeers at the "Welcome to Texas, Y’all" party and save your strength for the Friday- and Saturday-night schmooze fests.

5. Come early to sign up for kaffeeklatsches and literary beers with your favorite author – then skip their panels. Face-time with your favorite author is cool. Watching your favorite author get talked over by some random nitwit they got thrown onto a panel with? Not as cool as it sounds. Sign-up sheets for the small groups come out half a day before the event, so fight that hangover and get to the con early (or do a little research on lesser-known names – you could wind up talking to a writer who’s not getting tons of love but might have a lot to teach you). Then, once you’ve secured your slot with whomever you know you can die happy after talking to, retire to your hotel room for a hangover-curing nap so that you don’t sound like a blithering idiot when you finally get to do it.

6. Skip the Masquerade – or bring a book. An old hand at fandom told me this, and I refused to believe it, because the lying media have led me to believe that cosplay is the most exciting feature of any geek con. This may be true in San Diego, but San Antonio was a different story. The Masquerade is a beloved tradition, but there are far fewer costume entries than you would expect, and far more surreal filler: elaborate sound cues that inevitably get bungled, confusingly high-concept background narration, and a halftime show that is inexplicably long and, unless you really, really love stage magic, tragically low-energy. The con's Toastmaster, sf and comics author Paul Cornell, did yeoman’s work at the podium, but despite some inventive Tardis outfits, lovingly hand-painted leather corsets, and a dead ringer for Daenerys Targarian, the highlight of the night was when a toddler with devil horns and a cape tripped over a stuffed armadillo and fell down. Catch it on YouTube the next day and spend your time at the author parties instead.

7. Carry snacks. Unless the idea of paying two bucks for a cold, rubbery banana at the Starbucks in the convention center lobby every day appeals to you.

8. Don’t handicap the Hugos until you’ve spoken to the fannish masses. They paid the admission price, they did the voting, and they really, really like Star Trek. Which means that John Scalzi’s breezy fan-bait Redhirts is probably a more serious contender than the paperback brick with the planet on it. Oh well, you win some, you lose some. I'll do better in Helskinki. 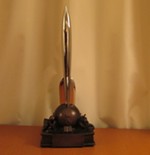 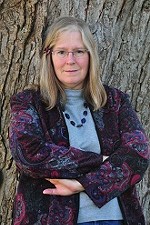 LoneStarCon 3: The Lois McMaster Bujold Interview
The Hugo Award nominee and past winner on biology as politics 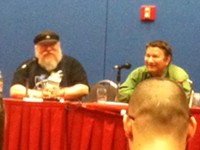 LoneStarCon 3: The Howard and George Show
Howard Waldrop and George R. R. Martin really do like each other

LoneStarCon 3: Friday
Who knew the 'War of the Worlds' had its last stand in San Antonio?