This oddly beautiful debut novel could garner a million no-prizes. 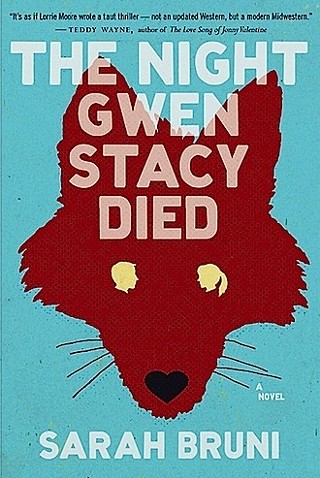 Some messengers are trickier than others.

By the Flames of the Faltine!
What the everlovin' non-canon hell is this?

A novel with the title of The Night Gwen Stacy Died? And not written by some elderly yet still testosterone-influenced hand, some graying and properly male author who understands that, as the uncanny Jonathan Lethem asserted in Bookforum several years ago, "the first romantic loss for a lot of guys my age was Gwen Stacy’s death"?

Yes, it's true. This book, with that title, is the first novel of one Sarah Bruni – a woman who's too young to have read the titular storyline in its original appearance! A woman who had to do second-hand research to understand the deep and abiding mythos she was referencing in this inaugural literary feat of hers! Sarah Bruni, true believers: A fake geek girl if ever there was one! Yet another wannabe in that marauding distaff horde that besieges us on all sides! Better tighten your propellor beanies and prepare to snub the living dogshit out of this pushy chick's dilettante ass, by Crom!

As both a fellow still in recovery from the near-debilitating bout of Marvel Fever suffered in early childhood and an aficionado of more mundane narratives that rely on other than smash-boom-bang and archetypal derring-do for their greatest impact, I'm glad to tell you that Sarah Bruni has succeeded at a difficult task. A fiendishly difficult task, even: She's written a tale of modern, twisted romance – between two misfits, two young and socially dysfunctional Iowa natives who take it on the lam to Chicago – and she's infused the story – thoroughly, at several depths – with that whole climactic story arc (issues #121-122 of The Amazing Spider-Man), and she's done this in a way that's so thoughtful and compelling that it's a toss-up whether a reader's going to give more of a damn about the book's characters or the author's way with description and pacing.

And this is just her first novel, too, remember.

And, as you're reading The Night Gwen Stacy Died and marveling (ahem) that so many of Bruni's renderings of places or people or what they call interiority could stand alone, beyond the novel's context, as gorgeous examples of How To Effectively Evoke A Place Or A Person Or A Feeling … as you're beginning to realize just how this whole Gwen Stacy schtick isn't merely a handy hook and complication for the characters but is simultaneously readable as a commentary on the malleable identities of humans contending with the vicissitudes of the past and the sometimes daunting possibilities of the future … as you're beginning to understand why a young, dream-haunted cab-driver who calls himself Peter Parker might kidnap an even younger convenience-store clerk he insists is named Gwen Stacy and abscond to the Windy City … you might start to wonder if Shirley Jackson, say, started out at such a high level of literary goodness back in the day.

(But don't wonder that aloud, OK, because maybe this Bruni's got some spider-sense of her own and the nerve-level knowledge of such casual hyperbole might cause her to tingle with embarrassment.)

Spider-Man, Gwen Stacy, the Green Goblin? Ultimately: Feh. You don't need any prior investment in those characters, no faint nostalgia for the four-color sagas of your misspent youth, to appreciate what's going on here; the author provides all the background and context you'll need. There's no Spandex. No web-slinging. Nobody's actually a Skrull. This first novel from Sarah Bruni is a superhero story in the way that Donnie Darko is a superhero story, you know what I'm saying? (And if you don't know what I'm saying, please consider this article a recommendation for that brilliant film, too.)

Summary: Gwen Stacy may be dead – *sob* – but, with this new release from Mariner Books … Face it, Tiger, you've hit the jackpot.