In which, among other things, an author hits Earth with a huge asteroid. 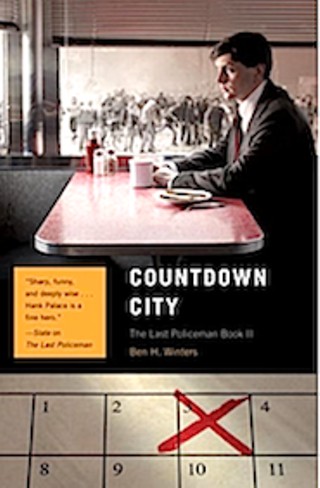 He's a regular at the Somerset Diner.

Ben H. Winters, you're killing me.

As sure as the asteroid heading toward Earth is going to wipe out humanity when it finally arrives at the end of your apocalyptic The Last Policeman trilogy, you, sir, are fucking killing me.

Because I read The Last Policeman, the first book in your series. Because my wife had checked it out from the library, and I saw it lying around the house, and I was like, "Oh, yeah, I heard about that thing when it came out. It's supposed to be good."

"It's really good," said my wife. "Brenner, you should read this."

So I read it. And I, too, thought it was really good. The way you describe what's happening to society in general and to the community of Concord, New Hampshire, in particular – where your straitlaced protagonist Hank Palace is a newly promoted detective on the local police force. The way you describe routine things breaking down and social constructs crumbling in light of the imminent and unfathomably destructive asteroidal impact, it's so damned good, Winters.

It's good, first off, because you know how to write. I wasn't aware of that, previously – because I'd not read your earlier works – although of course I (and everybody else I know) has at least heard of Android Karenina and Sense and Sensibility and Sea Monsters and those other titles, sure. Second, because your characters present as actual individuals, people limned finely enough that a reader can care about them instead of just, like, tracking the movements of cardboardish plot-gears. (Hell, I've became sufficiently invested in your subsidiary characters, even, that I've imagined a cinematic version of The Last Policeman with Neil DeGrasse Tyson playing the Detective Culverson role.) And, third, because the crime around which Hank Palace's relentless sleuthing orbits in this first novel is 1) intriguing and 2) believable and 3) solved without overtaxing the narrative engine that powers basic suspension-of-disbelief.

And what I say to my bookloving friends is: You should really read this, it's pretty fucking terrific.

But now here's the second book of the trilogy – here's this Countdown City of yours, just out from Quirk Books – and you are killing me.

Same setting, of course, but now the approaching asteroid (2011GV1, also known as Maia) is only three months away. And you've nailed that setting and the likely consequences of the knowledge of when and where Maia is going to hit. You've ramped up the tension in your narrative by effectively capturing the way the tension of the world is, naturally, helplessly, ramping up. And you've got your already-established characters acting in ways that make sense, that are pretty much consistent with what we've come to know of them. And you've got this new guy named Cortez who's a remarkable & twisted delight in the story, like when you're a little kid and reading The Hobbit and you meet Gollum for the first time.

So hurray for that: It's good to be back so near the end of the world.

But, ah, what the hell are you doing with Countdown City otherwise, man?

My friends and I, we don't necessarily require some mundane literary tome in which nothing happens to deeply caring but ultimately boring characters & which provides interest only to those PhD-track Modern Lit students whose prime raison d'être is the attempt to get a prose vignette published in The Paris Review or at least their university's annual literary magazine. But we do want something other than a direct-to-video thriller starring whoever is the upcoming generation's version of some second-tier Jean-Claude Van Damme-manque. We want a viable balance between the two; we want a story that moves along, yes, but without the machinery of plot stretching probability like so much Silly Putty™ in a Calabi-Yau Manifold. You dig?

I mean, Ben – Mr. Winters – don't you want that, too? Or didn't you? Didn't you want to extend the promise of your first book without, ah, without devolving toward pulpy shenanigans and wild coincidences that would've made Lester Dent blush?

["That one scene, with Palace's sister?" said my wife, who (of course) read Countdown City as soon as I was done with it. "That was really a bit much."
"You mean the part where … " I began.
"Yeah," she said. "Deus-ex-helicopter."]

I know, man, I know. I know that William Goldman followed his brilliant Marathon Man with the meager and flimsy sequel Brothers – a story not worth remembering except for its introduction of "remaindered" as a spy-land synonym for "killed." Beyond thriller territory, I'm aware that the depths & details of Erica Jong's Fear of Flying had evaporated by the time of her Parachutes and Kisses. And it's possible – doubtful, but possible – that Sarah Bruni's excellent first novel, The Night Gwen Stacy Died, just recently published (and reviewed right here), could eventually mark her as a one-hit wonder.

So you're already not in bad company, sure.
If that's any kind of consolation.

But I'm more concerned with myself here. As one of your readers. So I'm hoping – we're hoping, my wife Katherine & I – and all the friends we've pimped The Last Policeman to – we're hoping that you err on the side of Other Than An Overwrought Hollywood Thrillfest with your third novel in this series. Which, admittedly, is going to be extra difficult. Because that fucking asteroid's gonna smash right into our big blue marble at the end, isn't it? And in the days before it does, all the loonies with their stockpiled weaponry and/or religion-fueled mania will be, even moreso than earlier, losing their shit in unavoidably dramatic fashion. And that'll be a hell of a job, then, to give the attendant story a better-than-Michael-Bay treatment.

And – not just because it's your game so you get to call the shots, but because that first book is evidence of your writerly prowess & how you can choose to privilege the personal reality of your characters above the need for penny-dreadful thrills – you're the best man for the job, aren't you?

Waiting for it, author. Counting down the days.