Thomas is perhaps best-known for being the creator of the cult hit TV series Veronica Mars, which was recently in the news for its record-smashing Kickstarter campaign. But he's an award-winning author too: His YA novel Rats Saw God was published in 1996 and received the American Library Association's award for best YA book the following year.

Dessen has also been publishing since the late Nineties, but her latest, The Moon and More is due out from Viking Juvenile next month, so she'll have plenty to talk about too.

You can read more about the lunch speakers – including Thomas' take on self-doubt and taste in Austin chips and salsa – in two interviews posted over on the ATBF website. 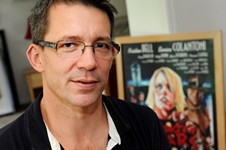