Welcome to the X-Men, David Marquez: Hope You Survive the Experience! 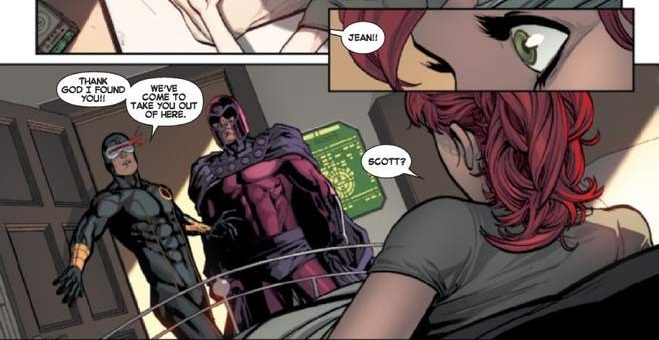 Call David Marquez a Marvel zombie, and he'll be pretty happy with it. In two years, he's gone from indie creator to drawing a Fantastic Four graphic novel, handling art duties on Ultimate Comics: Spider-Man, and now his three issue run on All-New X-Men begins. With the comic on shelves now, he said, "It's finally starting to feel real."

The title is one of Marvel's hottest properties in its X-continuity. The X-Men are healing old wounds after the huge Avengers Vs. X-Men cross-over, but the divisions still run deep. Worst of all, founding team leader Cyclops is a mutant terrorist on the run. So his old friend Hank McCoy aka Beast comes up with a radical plan: Bring the young Cyclops and the original X-Men from the past to talk some sense into his older self. The time-travel plan quickly goes awry as the young heroes face a future that looks pretty dystopian to them.

It's a Marvel fan's dream, being able to draw the classic lineup designed by Stan Lee and Jack Kirby and set them along side their older selves, written by Brian Michael Bendis (Powers, Avengers, Daredevil) and designed by Stuart Immonen (Thor, Fear Itself, New Avengers.) And that's exactly what Marquez gets to do for the next three issues, before Immonen returns. Marquez said, "It's weird when I stop and I think about it. While I've drawn comics and tried to break in for a decade, the first time I've been in front of a decently sized portion of the readership started with Fantastic Four: Season One, and that was a year ago."

All-New X-Men is actually Marquez's second turn at a hot new title. Last year, Marvel was so impressed with his work on the first family of comics that they called him in for the second story arc on Ultimate Comics: Spider-Man, the alternate reality Spidey. Sara Pichelli was the original artist, and starting with issue 9 Marquez stepped in for an nine issue fill-in run. He knew Pichelli would be back with issue 19, so he was guarding her flame. Then, around the time he was working on issue 16, Bendis asked whether Marvel had called him yet. Marquez said that, when he asked Bendis what he meant, "He very cryptically responded, well, I'll just let them tell you.' I was pretty certain that it wasn't going to be a bad thing, but it's a little hard when it's left out in left field like that." "I knew I had to make him the Wolverine that was in my head, and not Jim Lee's wolverine or Stuart Immonen's Wolverine." David Marquez gets the claws out for the feral mutant in 'All-New X-Men' issue 6 (Image courtesy of Marvel Comics)

When he got home, he'd missed a call from senior X-Men editor Nick Lowe, but Marquez still wasn't going to get his hopes up. Knowing that Bendis was revamping the X-Men, he knew it was a possibility he might get called in. He was still floored when the offer came, but having already picked up from one iconic and defining run on a character with Spidey, he said, "It's actually a little less intimidating this time." Still, there are a few butterflies. "Following Stuart Immonen is a daunting prospect," Marquez said, "because he is the definitive super hero artist."

While Marquez paints Immonen and Pichelli as the lead creators, there are far worse gigs in comics than being the pinch hitter on two of the industry's biggest titles. It doesn't hurt that he's got Bendis, one of Marvel's architects, in his corner. Marquez said, "Knowing that there's a creator who wants to work with you, particularly someone who's as influential as Brian, it's a huge pat on the shoulder from the boss."

It's a great time to be working at Marvel. 17 year ago, the House of Ideas had filed Chapter XI bankruptcy papers: Now it's one of the most profitable and independent wings of the Disney empire. It's a great time for talent as well. Marquez said, "The fill-in artists for the regular artists are A-listers, and I like the way that Marvel is bolstering the titles they believe in." Take Hawkeye, Matt Fraction's sly spy take on the bow-bending antihero. Marquez said, "It's tongue in cheek, but it has heart, and that's the kind of book that makes Marvel feel like to Marvel to me."

It's a particularly good time for women creators and characters, with female lead projects like Fearless Defenders, Uncanny X-Force, X-Men and Captain Marvel by Kelly Sue Deconnick all either on the shelves or heading to the printers. Marquez said, "Kelly Sue is working on a project she's passionate about."

Now he gets to start on the hard work for his own passion project. It's a huge challenge, not least because All-New X-Men is the ultimate team book. Marquez said, "It's very important to me that each character is recognizable, in costume or out of costume, black and white or in color. That's a challenge with the X-Men because the cast is so fucking huge."

The time travel plot, and having young and old characters stand by each other, creates unique problems. Fortunately, Immonen has blazed that trail for him, but there's still the challenge of making each version of a character distinguishable, but also recognizably still themselves. That's easy with Beast (after all, the teen McCoy wasn't a big, blue, furry ape), but it take subtler changes with someone like Iceman, who has simply aged from a round-faced teen. But the most fun may come from juxtaposing fan favorite Jean Grey and the all-grown-up Kitty Pryde. Grey has traveled to a future where her older self has died, and now Pryde runs the Jean Grey School for Higher Learning. Marquez said, "Kitty and the older Jean Grey didn't necessarily get along the best, but now there's a reversal of roles. Jean had the head mistress role, and now Kitty is the headmistress."

So who is he most excited about drawing? "I feel shitty that my answer is a little trite," he said, "but Wolverine is a big deal for me." Like every aspiring comic artist, he's been drawing the clawed Canadian since he was a boy but, he said, "Drawing it on a comic page, it's different to just doing a sketch. There was a moment I was drawing him for the first time, and there was a moment when I knew I had to make him the Wolverine that was in my head, and not Jim Lee's Wolverine or Stuart Immonen's Wolverine."

David Marquez will be at Austin Books and Comics, 5002 N. Lamar, signing copies of All-New X-Men and his other work from 4pm today, Jan. 16. Tomorrow, Jan. 17, he will be selling limited edition artists proofs via his website www.davidmarquez.com.