Bob Byington on the exercise that got him writing again

Two things happened for me as a writer that got me over a hurdle – one was winning the Chron contest in 2005, I think it was, and the other was running across a writing exercise suggested by David Milch, who created Deadwood and did a lot of good writing on NYPD Blue back in the day.

He said to, with zero premeditation, start writing a dialogue between two characters. Don't think about it, just start. You don't know who they are, you just start with a line, like, "I'm not putting cheese on this breakfast taco." And then also responding as immediately and unconsciously: "OK, but please put salsa at least." And then the other voice responding: "You do know we're closed, right?" and then, "Yes, I do know, but the front door is unlocked." And you continue, Milch says, for 20-45 min. This isn't writing, it's exercise. Attempts to actually put the material you come up with into something you're working on will fail. I did it every day for a month in February and March of 2005 and emerged with a much different understanding of writing.

Bob Byington is the writer/director of such award-winning films as Harmony and Me and Registered Sex Offender. His latest film, Somebody Up There Likes Me, will be released theatrically by Tribeca Film on Feb. 22, 2013.

"A Celebration of Writing, and Reading"
Louis Black's notes on the first Chronicle Short Story Contest

Short Story Contest Update
Of the 410 total entries, we're down to 10 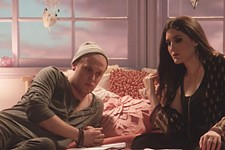 Living Between What?
Alex Munt spells it out