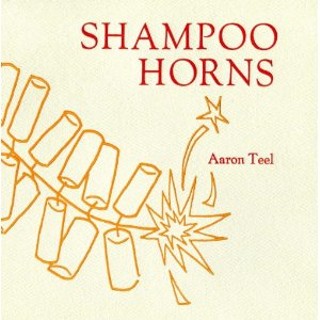 A collection of flash fiction stories, Aaron Teel's Shampoo Horns is the winner of the 6th annual Rose Metal Press Chapbook Contest. Its brightness left me seeing spots for days.

Balancing the tightrope of adolescence means navigating life’s cringe-worthy marvels and experiencing the paradoxical notions of pleasure and pain. In Shampoo Horns, Teel paints the emotionally charged story of Cherry, a trailer park dwelling 12-year-old boy clad in superhero gear, as his small world is shaken in every sense by a troubled half-brother, a Mexican angel, and a Texas twister.

Teel’s lightly autobiographical stories employ thematic explosions that melt together to create a psychologically poignant account of a pretty normal kid’s barefoot adventures. The stories share some of the between-childhood-and-adulthood purgatory of Stand By Me and the absurdities of Winesburg, Ohio, yet Shampoo Horns has its own distinct style. As Cherry begins to see how love, sex, and money shape lives, he stands shakily on the edge of perceiving all kinds of relationships for the first time. He is innocent enough to fall prey to his brother’s bullying yet Cherry seems to possess a subtle strength that guides him through adult scenarios relatively unscathed. In a short time, the intricate story arc employs brilliant color and sensory descriptions resulting in comical depictions of uncomfortable scenes such as peeping a naked sleeping widow and vomiting hot stolen beer.

Sometimes grotesque (one kid loses a nipple at the hand of his best friend), this one-sitting read explores elements of voyeurism, friendship, and faith by weaving the nuances of young boys in the throes of boredom and curiosity. Bodily fluids make frequent appearances but the sweet awkwardness of Cherry’s newfound puppy love with Lupe steadies the pace. The moments of depression invoked by the stories’ heavy realities (poverty, substance abuse) are relieved, if only temporarily, through Teel’s expert craftsmanship and imagery. This short work embodies the beauty of creative storytelling that bleeds honesty but sparks imaginative conclusions.

Austin Chronicle: I'm curious if any of the material is autobiographical. How much of you is written into the character of Cherry Tree?

Aaron Teel: There are definitely autobiographical elements. I was a tall, awkward, redheaded kid who lived in a trailer park in Texas and wore Superman Underoos, and I have an older half-brother from California who sometimes lived with us and wasn’t always very nice. The relationship between the two brothers is based largely on our real dynamic.

I started out trying to write a Nabokovian memoir in the vein of the childhood sections of Speak, Memory, but I discovered pretty quickly that I'm not really interested in writing about myself in a strict memoir setting. So the book as a whole is undeniably fiction, but the primary characters are based on real people, and real dynamics from my childhood, and some of the stories are essentially true.

Austin Chronicle: You utilize all five senses in your descriptions and integrate color and smell frequently. Has that always been predominant in your writing?

Aaron Teel: This goes back to the Nabakovian synesthesia thing. That was something I wanted to play with in particular for this piece. For me, childhood is the time when we’re most in tune with our sensory experience of the world. The limitations of Cherry’s experience only enhance his sense of wonder. Everything he comes in contact with has more weight because he’s so isolated.

Beyond that, I just find rich sensory detail to be a hallmark of good writing. Flash fiction particularly should be sense driven. If the goal is to capture a moment or an image, and make it real for the reader, then there’s really no other way to do it.

Austin Chronicle: To me, the nipple clipping in "Tater's Nipple" was powerful not only for the vivid, grotesque imagery, but for the emotional aspects of each character's role in the scene. What was your inspiration behind it?

Aaron Teel: Unfortunately, that’s one of the pieces based on a real event. I won't go into too much detail other than to say that it’s something that’s stuck with me over the years, for obvious reasons.

I’m glad that the emotional resonance comes through, though. That was actually the first piece I wrote from the collection. It was published individually and the response I got from it sort of encouraged me to write the rest.

Austin Chronicle: Despite his depiction as a hellion with questionable morals, Clay seemed, in the end, a lost boy in desperate need of tough love. Did you hope your readers would finish Shampoo Horns holding out for Clay's redemptive qualities?

Aaron Teel: Definitely. He’s a sixteen-year old kid, uprooted and shuffled around. He’s angry, and bored, and acting out, but he’s also possessed of a terrible charisma that Cherry is drawn to. Cherry is clearly ambiguous about him, so it stands to reason that the reader will be too.

Austin Chronicle: I found the difference in Cherry, Tater, and Clay's relationships with their fathers interesting. Were you consciously trying to create contrasting portraits of the father/son bond, or did that sort of emerge as you were writing the individual stories?

Aaron Teel: The idea was to focus on the kids, and to allow all of the adults in their lives to be sort of mysterious and unknowable, which is the way I felt as a kid. Fathers are the most unknowable of all. They’re masculinity personified. Huge, mythic beings to be loathed and worshipped in equal measure.

Austin Chronicle: The way the plot unfolded was striking, especially given the length. Did you write it in pieces and weave together later or is this a plotted story you had in mind?

Aaron Teel: The individual pieces were rearranged a hundred different ways over the course of writing and editing the chapbook. The idea was for each piece to work both individually and as part of a larger narrative. The arc, such as it is, is kind of a smoke and mirrors illusion sustained by the arrangement of the pieces. That was done very deliberately.

Austin Chronicle: Is the chapbook of flash fiction your preferred format?

Aaron Teel: I think I’m well suited to it. It lines up with the way I work and my sensibilities, but I don’t want to be tied to any particular form. I like to think genre and form distinctions are meaningless, but of course they’re not.

Austin Chronicle: I have an almost 3 year old boy who prefers the uniform of Cherry (Superman underoos and a cape) to any other clothing option. But Cherry is 12. Talk to me about what that uniform means to you, and how Cherry's relationship to the uniform evolves in the book.

Aaron Teel: Yeah, I wore the cape and Underoos too, and I was a few years younger than Cherry when I did it. I was attracted to the idea of making Cherry a little older because it’s bizarre. He’s just old enough for it to be really awkward that he’s wandering around in his underwear. It also ties in to the notion that he’s this incredibly sheltered kid on the precipice of puberty that hasn’t grown up at all. He lives happily in his little Eden until Clay and Lupe come in and complicate everything.

As Cherry starts having these new experiences, he tries to leave the cape and Underoos behind, but when he’s upset or in distress he goes back to them, drawing back into his shell, where he’s comfortable and in control.

The cape is a really loaded symbol for me. Putting it on as a kid brought instant power and confidence. I jumped off the top of a set of bleachers once, at a volleyball game, using a white locker room towel for a cape, and I remember the utter shock of hitting the floor. I really thought I could fly.

Austin Chronicle: Cherry seems to have a quiet reverence for the women in his small world. Was this an attempt to balance the boyish nature of Shampoo Horns or was it more of a natural inclusion in a boy's coming of age story?

Aaron Teel: I think all little boys are in awe of women. We never really grow out of that.

Aaron Teel: We’re having the official release party this Saturday at Domy Books. I’ll be reading along with the always brilliant Mary Miller. John Wesley Coleman and Diamond Age are playing as well. I’m also working on another set of linked flash pieces about a two sets of twins. A few of those have been published already. You can read them at www.aaron-teel.com, under the Stories tab.